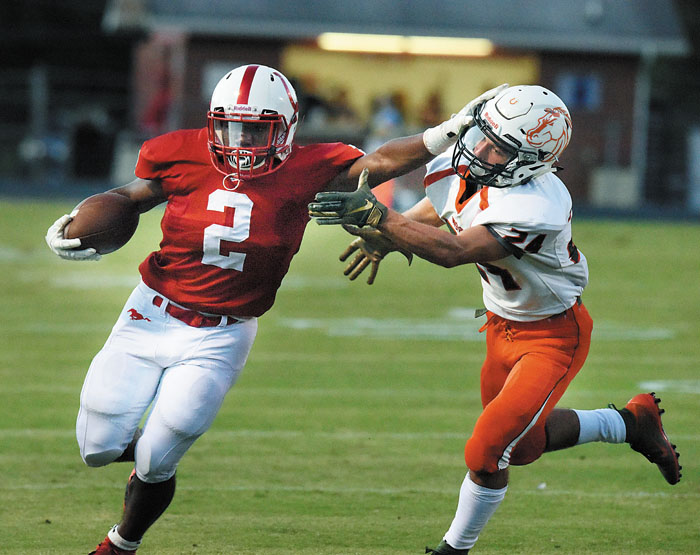 East Rowan's Sammy Pinckney will be trying to pull away from defenders all season. File photo by Wayne Hinshaw, for the Salisbury Post

Seventh in a series of reports on local high schools …

GRANITE QUARRY — East Rowan football has been stuck in the middle of the Rowan County pecking order for several seasons.

It’s not like the Mustangs have been bad, but neither have they been on top. The last playoff victories for the program came on the road in 2014.

East was competitive in the fall of 2019, even after it was rendered quarterback-less by injuries and was snapping the ball to a running back on every play.

East smacked county rivals Carson and South Rowan, logged its annual win over North Piedmont Conference opponent North Iredell and took non-conference games against North Stanly and Mount Pleasant squads that made the playoffs in 1A and 2A, respectively,

The games that slipped away were North Rowan and South Iredell. East was one play away from winning those two — so 7-4 and a really nice season and a playoff berth were right there.

East head coach John Fitz welcomes back most of the key ingredients from 2019, including the biggest stars — Sammy Pinckney and Vincent Jones.

Opponents have to respect Pinckney and Jones, so every faked handoff opens up the field for passing opportunities for a strong-armed quarterback.

And now East will have a conventional QB again.

The possibles are juniors Cameron Padgett and Aiden Schenck, a transfer from A.L. Brown.

Padgett, a UNC baseball recruit who just finished up a strong basketball season, came out for football.

“He hasn’t played the sport a lot,  but he’s an athlete and he’s a competitor and he has a natural ability to throw the football,” Fitz said. “Schenck has played a lot of football, although mostly defense. If he’s not the quarterback, he’ll be playing somewhere else. It’s not like he’s going to be sitting.”

Jones and Issac Hinceman are the top returning pass-catchers. Evan Porter and fast A.L. Brown transfer Tyler Gray are promising. Morgan Padgett, Cameron’s younger brother, is expected to catch some passes in an H-back role. The blocking of Dominick Dale (6-2, 233) will be a factor when East wants to line up with a traditional tight end.

As far as ballcarriers, the Mustangs couldn’t be in much better shape.

Pinckney already is 12th on the modern county rushing list (since 1968) with 3,445 yards and even in a COVID-shortened season he’s very likely to eclipse Sam Wall’s school-record 4,005 rushing yards that was set in 2016. Pinckney turned in some monster games last season — 288 yards against South Iredell, 277 against South Rowan, 272 against Carson, and so on. He amassed five 200-yard games and his 1,830 rushing yards broke East’s single-season record..

Jones turned in a 275-yard rushing game of his own. He’s very strong and determined, and if Pinckney shoulders the lion’s share of the rushing load, Jones can focus on catching passes and playing defense.

“We’re pretty happy with what’s going on in our backfield,” Fitz said.

On the offensive line, the Mustangs lost center Colby Lovingood to an injury that required surgery. Left tackle Josh Samoa heads the returners. Josh Teeter, Colby Quick, Victor Ponce and Ralond Frost (6-3, 300) will be counted on to open holes for Pinckney.

“We’ll be mixing and matching,” Fitz said. “Those offensive linemen will also be helping on defense.”

Cole Eagle gives the Mustangs a quality placekicker. He kicked four field goals and 26 PATS in 2019. Hinceman will do the punting again. East had two soccer Honeycutts come out for football, so there’s unusual depth at kicker.

Ralon Frost, Ponce, Quick and Samoa are interior defensive linemen. The defensive ends are headlined by Dale and athletic Tayron Frost, the outstanding wrestler. Most of Schenck’s experience is as a defensive end, so he’ll be a big help there if he’s not playing quarterback.

In the secondary, East is in good shape. The Mustangs normally use a 4-2-5 defense with three safeties.

The top corners are Tahj Young, Hinceman and Jones. Schenck can play safety as well as defensive end. Porter, Gray and Zaquavion Winford will be used as safeties. In a pinch, East will use Pinckney as a safety, but the Mustangs would prefer to keep him fresh to power the offense.

Besides having a record-breaker in the backfield and a lot of special athletes, East’s numbers are up.

“I’m not sure what to make of that because most people are down some,” Fitz said. “But we’re up from where we’ve been. We finished last season with 14 jayvees. This year, we’ve got 34 on the varsity and 37 on the jayvees.”

Fitz is grateful for a season, even one that will be shortened for East to an opening non-conference game against Mount Pleasant on Saturday and the five NPC games.

The rain that persisted for much of February has wrecked practice fields. Fitz was busy trying to dry East’s practice field on Tuesday.