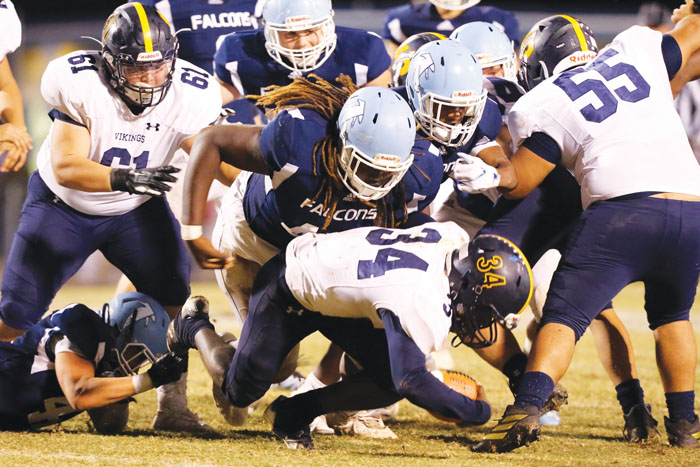 West Rowan’s Zeek Biggers (44) and the defense will be key for the Falcons' success this season. File photo by James Sipes for the Salisbury Post

MOUNT ULLA — Coach Joe Nixon’s five years at the helm of West Rowan’s football team didn’t quite restore the glory days, but they were stout.

The average season during his tenure was 8-5, and West won nine in 2019 by muscline perennial powers Freedom and Crest in the state playoffs.

Nixon’s teams maintained West’s reputation for toughness and togetherness and they also maintained an uninterrupted string of playoff appearances that dates back to 2002.

Now with Nixon guiding 4A neighbor Mooresville, former West tight end Louis Kraft is the new head coach and there are quite a few new staffers around him.

The young head coach will lead a young team.

“We’ve only got 11 seniors,” Kraft said. “Fortunately, all 11 will be starters or at least major contributors.”

Kraft’s coaching era will start with a loud bang — a trip to Salisbury to play a squad that was 2AA state runner-up in 2019. West never lost to a Rowan opponent in Nixon’s five seasons, but the Falcons haven’t encountered Salisbury except in scrimmages since 2014, and the Hornets are a lot different now than they were when West was smacking them around in 2014.

So West will either start the COVID season 0-1 or a glorious 1-0, depending on what happens next Friday at Ludwig Stadium. Either way it’ll be a story.

A loaded Davie team is West’s opponent in Week 2, so the fun will continue.

Kraft has experienced the same COVID guidelines headaches and weather miseries as every other head coach as he’s tried to prepare for his first season.

“The weather’s been bad enough that  you’re just trying to get through the day and get to the next practice,” Kraft said. “Our  practice field is a mud pit, but everyone has continued to work. No one complains. They’re all drinking the Kool-Aid.”

Kraft has found a silver lining in a long-delayed season that normally would’ve started in August.

“We’ve got a lot of guys who definitely would’ve been Thursday players (jayvee) in the fall,” Kraft said. “But now they’ve been lifting for six months and they’ve changed their bodies enough that they can help the varsity. We’ve got an awful lot of talent in our freshman and sophomore classes.”

Jalen Houston, who powered West’s offense, and Baiden Suddarth, who seemed to make half the tackles for West’s defense, are gone.

West’s offense starts with Noah Loeblein, who won the starting job as a sophomore. He threw for 1,164 yards and 13 touchdowns and ran for 258 yards and two scores.

“Last year Noah’s job was to manage the game and not lose it,” Kraft said. “But I have no doubt that this year he’s going to win games for us. The ball is coming out of his hand a lot better. He’s more mature. He’s more confident.”

Cayleb Brawley was in the shadow of the electrifying Houston,  but he quietly turned in a terrific season that included 190 carries for 979 yards and six TDs. An ankle injury in the Crest game kept Brawley from producing a 1,000-yard season.

Akin Robinson showed flashes last season when he got carries. Powerful Michael Gonsalves, a running back who has been converted to linebacker, might be an option in goal-line situations. West used Suddarth in short-yardage situations in 2019.

The receiving corps is a bit of a mystery as the top three pass-catchers graduated. Damon Phillippe, who had eight receptions, is the only experienced returning wideout. Andrew Kennerly and Garrett Fesperman will get their chance, and Kraft is excited about the potential of Peter Williams-Simpson, who is coming back from an ACL injury.

“He might have more athletic ability than anyone on the team,” Kraft said. “With his speed, he can be that over-the-top guy for us.”

Ben Sweet and Misha Lippard lead the tight ends. West has some two-tight end sets that would make use of both of them.

“They can both catch it,” Kraft said. “They can be the best pass-catching tight ends West has had in years.”

West is famous for sturdy offensive lines. This one will be led by 300-pound left tackle Josh Noble.

“The good thing about Josh is that he’s 300, without looking like he’s 300,” Kraft said. “He’s a leader, just comes in and goes to work and helps all the young guys. If you could take a cookie cutter and make 22 of him, you’d do it in a heartbeat. I believe he’ll blow up this season and be recruited by a lot of schools.”

It will be a young group, as West graduated a herd of experienced offensive linemen.

Parker Safley will be the center. Alijiah Gray bullied opponents in jayvee competition, and he’s being counted on. Tyler Cline, a freshman, is one of those players Kraft was talking about that wouldn’t have been ready in August, but now he could be.

Defensively, the Falcons should be very good.

It starts on the defensive line with Biggers, obviously, but Ashton Matthews and James Ball also have plenty of experience.

“We’ve got three we know will be good,” Kraft said. “We’re still deciding on that fourth one.”

Noble and Gray likely will see some duty on defense.

The 215-pound Gonzalves will be a key to the defense as the middle linebacker.

He was West’s workhorse ballcarrier early in 2019. He had 91 carries for 371 yards in West’s first four games when a knee injury ended his season.

“The move to defense is a good one for him,” Kraft said. “That’s where we need him most, and he’s a better college prospect as a linebacker than as a running back.”

Qadree Ziyad, a 205-pound linebacker, earned accolades in a showcase camp, and is talented.

Nathaniel Estrada was undersized playing inside in 2019 and will shift to outside linebacker as a senior.

The secondary starters are expected to be Nigel McManus and Martrez Smith at the corners and Hunter Watts and Jaedon Neal at the safeties.

“Watts has made some of the biggest strides of any our guys since last season,: Kraft said.

Juan Arteaga is expected to handle kicking duties. Sweet is a good punter, but Kraft is hopeful one of the soccer guys will be able to handle that job, so Sweet can focus on tight end.

The offensive line and defensive backfield are where most of the new faces will be. It those position groups come through, West should be tough to beat again.

“If we run it right, we can sustain the success,” Kraft said. “We want to hang a conference banner and we want to take care of Rowan County. West has been kings of the county for a while.”

While it seemed like this season would never get here, West Rowan at Salisbury right off the bat figures to make it worth the wait.

“We’re on the doorstep of our season now,” Kraft said. “And that’s exciting.”