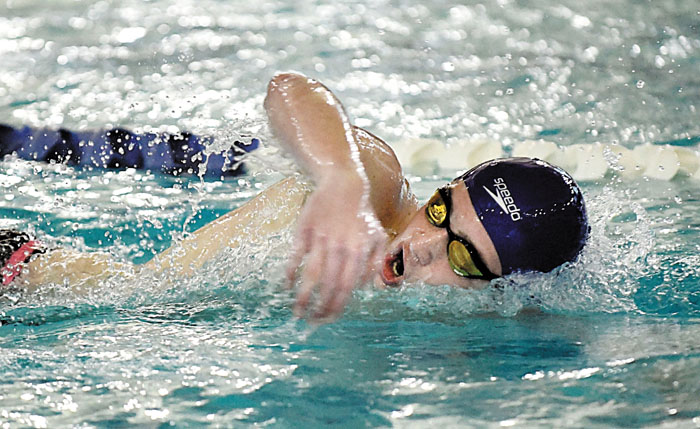 Carson's Cooper Sever was a regional qualifier in three events. File photo by Wayne Hinshaw, for the Salisbury Post

“Crazy swim season, exhausting swim season, but still a very fun season,” is how Carson junior Cooper Sever summed it all up.

The versatile Sever (it’s pronounced like a severed relationship or limb, not like Tom Seaver) is the Post’s Rowan County Male Swimmer of the Year.

That’s an award he shared last season with teammate Cole Dixon when they led Carson to the Cougars’ first-ever Rowan County aquatic title.

Carson didn’t get to defend its county championship during this COVID-plagued season, which was unfortunate. It probably would have been an epic struggle at the Hurley YMCA between Carson and South Rowan.

That leads to a logical question. How do you put together an all-county swim team when no county meet is held?

Once the times were merged from those two conference meets, it was easy to follow up with regional and state meet clockings. Then the Post used the standard criteria for being recognized as all-county —No. 1 in a relay or No. 1 or No. 2 in an individual event.

“He was the conference champion in the 100 breaststroke, but he dropped that time by more than a second in the regional,” Carson coach Wesley Parrish pointed out.

The Sever vs. Braxton Vagner (South Rowan’s best) in the 100 breast might have been the best race if a county meet had been staged. Wagner broke South’s school record in the 1A/2A State Championships with a 1:02.88 clocking, but Sever was even swifter — 1:01.91 — in the 3A West Regional.

Sever had a new coach at Carson this season  in Parrish. He impressed the coach greatly and not just because he turned in fast times.

“I’ve been a swim coach for seven years, but this was my first year with Carson,” Parrish said. “The very first practice, when I still had no idea what any of the swimmers could do, he was already going out of his way to work with the new swimmers, helping them get comfortable. I didn’t even have to ask. He just did it. He helped all of them improve this year.”

Sever was team captain for the Cougars, so he pushed himself through a challenging schedule. He swam five or six times a week with his club team, Tidal Wave Aquatics. But he would still make it to two or three Carson practices every week. He’d always call Parrish if he wasn’t going to be able to get there.

“It was hard with a lot of extra things to deal with, with COVID, like wearing masks out as soon as you got out of the pool,” Sever said. “But Coach Parrish did a very good job. He helped inspire all of us.”

As the son of Catawba College head swim coach  Michael Sever, Cooper essentially has grown up in a pool. He was swimming by the time he was 4 or 5 and he was competing in meets when he was 7.

Sever’s father was hired as Catawba’s head coach in August 2015, and the family relocated from New England to Rowan County.

As a freshman, Cooper won the 500 free in the Rowan County Championships and was a state qualifier in that event. He placed second in the county in the 100 backstroke.

As a sophomore, he was 4-for-4 in the county meet, winning the 200 IM and 500 free and helping Carson take first in two relays.

Last July, Sever demonstrated his endurance, accepting the challenge of a 24-hour swim as a fundraiser to benefit his uncle, Chris Wooten, who had suffered a spinal cord injury. Alternating swimming for 30 minutes with 30-minute rest periods, Sever covered 30 miles in 24 hours.

Sever hasn’t made it back to the state meet since he was a freshman, but that gives him motivation for his senior season … which hopefully will be a normal season.

Since he was a seventh-grader, he’s had the goal of swimming for the Naval Academy. That’s still the dream.

Swimmer of the Year