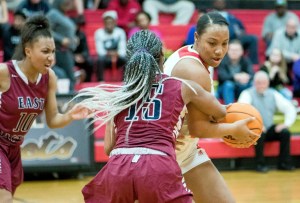 But they still weren’t in  any trouble. They weren’t in a hole. That long-awaited first hoop made it 2-all.

One of the best things about the top-seeded Hornets is they never stop working on defense,  and they were able to beat Oak Grove 49-30 despite some struggles and some droughts and some off-target layups.

“Not our best game, but we fought through it,” Salisbury head coach Lakai Brice said. “As long as we keep the defensive intensity up, we’re fine.”

“She sparked us,” Brice said.

Mary Morgan made four straight free throws for a 23-7 lead, and McCullough knocked down a 3-pointer for 28-9 lead. It was 30-9 at halftime.

Fourth-seeded Oak Grove never was able to mount a serious run, but the Grizzlies (8-4) were able to hang around by getting second shots and making free throws.

With Salisbury leading 40-26 with 4:44 left in the game, the Hornets called a timeout.

Icesis Nwafor made a contested baseline jumper shortly after that timeout, and the Hornets were extra-patient offensively the rest of the way.

Natavia Taborn got a layup and a 3-pointer in the stretch run to push the final margin to 19. She scored a  season-high nine points.

Ten Hornets played and seven scored, which is pretty normal.

Kyla Bryant scored 11  and handled the ball smoothly and passed it crisply, but all the Hornets missed shots they normally make.

“We were unselfish which is good, but maybe too unselfish, at times,” Brice said. “Sometimes we we had it close to the rim and still tried to make the extra pass.”

Oak Grove got 11 points from Zaire Jones, but only four Grizzlies scored.

Salisbury post player Haley Dalton, a potential shot-blocking presence, has missed the whole season to this point, but is no longer wearing a boot. Brice said she’ll practice for the first time on Tuesday.

Next for Salisbury is Wednesday’s tourney championship game against second-seeded North Davidson, a 52-40 semifinal winner against Ledford.