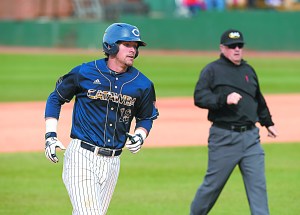 Catawba’s Hunter Shepherd got to use his home run trot in the opener. Photo by Wayne Hinshaw, for the Salisbury Post

Hunter Shepherd drove in six for the Indians. He homered and had a three-run double in the top of the 10th that proved decisive.

Cameron Morrison also homered for Catawba and drove in two.

Shepherd had three hits. Morrison, Dylan Wilkinson, Jeremy Simpson, who had a two-run double in the ninth, and Joe Butts had two hits each.

Ben Gilks was credited with the win. Trent Montgomery pitched the bottom of the 10th for the save.