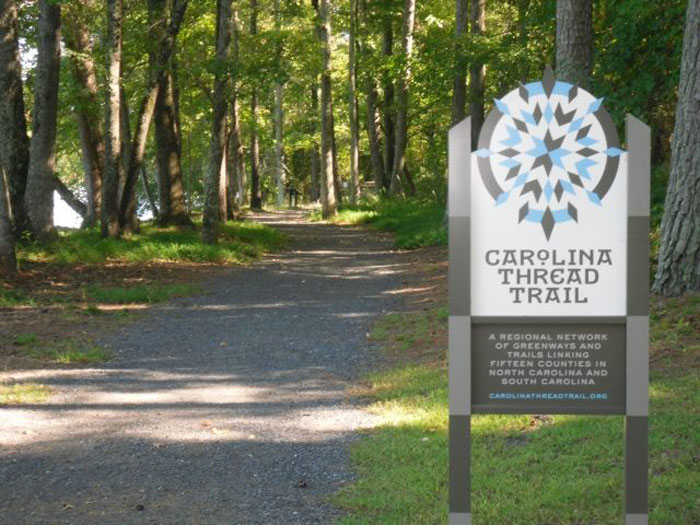 In the more than fives years since the Carolina Thread Trail plan was adopted, some progress has been made to connect Rowan County with the rest of the developing network. File photo

SALISBURY — When the Board of Commissioners voted 3-2 in favor of adopting the Carolina Thread Trail master plan in 2015, the county became the last of 15 to join the burgeoning trail network.

The idea for the Carolina Thread Trail started brewing in the early 2000s and came to fruition in 2007 when the project was officially launched to connect 1,600 miles of greenways in 15 counties in both North and South Carolina.

In conjunction with local governments, the Carolina Thread Trail organization crafted a master plan to guide the development of interconnected trails. Counties included in the plan began to adopt it soon after, but Rowan County commissioners held out — until 2015 when the board narrowly voted to adopt.

Commissioner Craig Pierce, who was one of the two commissioners to vote against adopting the master plan, said that his chief concerns were safety, trail upkeep and costs.

“My concern was that people would go out there, throw litter down and trash it out, but who is responsible to clean it up,” Pierce said. “No. 2, I was concerned about the safety of the people on the trail. My concern was the overall cost going forward once the trail has been initiated and no one could answer that question.”

In the more than fives years since the plan was adopted, some progress has been made to connect Rowan County with the rest of the developing network.

“That is the end game, to create this regional system where you can be in Salisbury on a bike and a few hours later it could take you all the way down to Charlotte and maybe down into Rock Hill, South Carolina,” said Bret Baronak, director of the Carolina Thread Trail. “It’s a regional connection.”

Progress hasn’t been rapid, but it wasn’t expected to be, Baronak said.

“Will we do that tomorrow? No,” Baronak said. “It’s going to take time. It’s a legacy project.”

“What we do as an organization, we serve in a catalytic role,” Baronak said. “We help communities get their project from a line on the master plan and help them work toward implementation and that’s done in a variety of ways. One is, we have a grant program, we provide technical assistance from design and routing. There’s always more than one or two partners involved in making a trail happen.”

The part of the Carolina Thread Trail in Rowan County that has seen the most growth since the master plan was adopted in the Salisbury Greenway.

The initiative to create the Salisbury Greenway started in the early 1990s and was spurred by a group of interested parties brought together by John Wear, the founding director of the Center for the Environment at Catawba College. Wear had a clear vision for what the greenway would be when he helped start the grassroots effort.

“We were looking at it from many vantage points,” Wear said. “One was alternative transportation, allowing people to bicycle through the community or make it more accessible to pedestrians. The other part was looking at the ecology of greenways and how we might enhance the ecology of areas.”

The Salisbury Greenway was developed slowly over time, coming together piece by piece. The most recent master plan for the greenway was established in 2009 and a committee has been formed to oversee and further its growth.

“The thread trail’s master plan has been a great guide to point us in the direction we want to go,” said Nick Aceves, director of parks and recreation for the city of Salisbury.

Along with consulting with Salisbury on the greenway, the Carolina Thread Trail has awarded the city with $458,000 in grant funding for projects to expand and improve the greenway. That money has been used for construction costs and infrastructure studies.

“As (the greenway) was growing, the thread trail money has really helped us and other communities in the county continue to make things happen,” Wear said. “It’s really been important.”

From just a small trail in the Memorial and Forest Hills parks, the Salisbury greenway has grown to cover more than 5 miles. By the time the greenway loop is completed, it will be over 7 miles long.

Aceves said that city staff are currently working to update the greenway’s master plan to position it for future growth. The updated plan, he said, will look to include areas of historical significance and create transportation pathways for people to walk or ride their bikes to work.

“We want to expand it to go around the whole city,” Aceves said. “The idea would be that you could hop on there and get across the city to some degree.”

“A lot of times with greenways, you do what you can do when you can do it,” Aceves said.

Eminent domain has never been used to expand the Salisbury Greenway, and Aceves said that the greenway will continue to grow on land that the city owns or that is donated.

The next step in the greenway’s growth is for a new section to snake across the back of the Catawba College lacrosse field and to install a low-lying bridge over Grant’s Creek with the goal of eventually connecting the trail to Kesley Scott Park.

Vivian Hopkins, vice president of the Historic Gold Hill and Mines Foundation, said that being a part of the Carolina Thread Trail has helped the Gold Hill Rail Trail gain more exposure among hikers in North Carolina.

While the Gold Hill Rail Trail hasn’t requested or received grant funding from the Carolina Thread Trail, it has been listed on the organization’s website and received signage to help visitors find their way.

“The Carolina Thread Trail has really helped to bring people here,” Hopkins said. “We’ve worked with them and they’ve worked with us to get signage up and let people know where to come for a shorter hike.”

Hopkins said whenever she speaks to someone visiting the trail she always asks them how they heard about it.

“I would say seven out of 10 are getting the information from Carolina Thread Trail,” Hopkins said.

During COVID-19, Hopkins said, the Gold Hill Rail Trail’s popularity has been bolstered by people having a greater desire to get outdoors — whether it be to walk, run or bike. Baronak said that an increased appreciation for greenways and trails is something he’s seeing throughout the region.

“I would say it’s great to be in the trail business right now,” Baronak said. “Again, there’s more and more recognition how important these facilities are to communities and COVID has brought that to light.”

That increased appreciation for greenways, Baronak said, could lead to more momentum for the development of the Carolina Thread Trail.

Some of those miles will be in Rowan County.