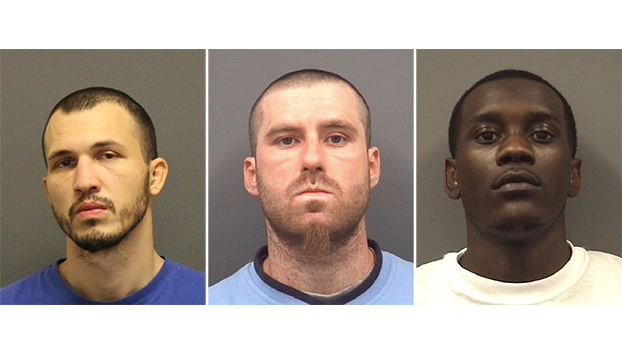 From left: Ballew, Hess and Still.

SALISBURY — Lexington Police on Monday night arrested a man wanted in connection with the robbery and beating of a 93-year-old Rowan County man and similar incidents across the region.

In a news release, police said Dwon Nicholas Still, a 31-year-old from High Point, turned himself in at the police department.

Lexington Police charged Still in connection with an incident there on Jan. 11. Still faces charges of first-degree burglary, robbery with a dangerous weapon, first- and second-degree kidnapping, conspiracy to commit armed robbery, assault with a deadly weapon with intent to kill, felony larceny and felony probation violation.

Still also is wanted in connection with a Rowan County incident on Jan. 19 on Little Crane Cove Lane. In that case, attackers rushed into a man’s home while he was letting his dog out. The men kicked the victim while he was on the ground, resulting in a gash on his head that required staples and on his lip that needed stitches. The Rowan County Sheriff’s Office says the attack was not random.

It’s not immediately clear what charges Still faces in Rowan County. The Rowan Sheriff’s Office only said Monday that Still had been identified as a suspect and that detectives were working leads to locate and arrest him. He’s being held in the Davidson County Jail with a $1.075 million bond.

Two other men, Alexander Hess, a 33-year-old man from Lexington, and Alexander Ballew, a 27-year-old man from Guilford County, were charged Sunday and Monday with robbing and beating the 93-year-old man as well as robberies in nearby counties. Hess was charged in the Rowan incident with crimes that included robbery, kidnapping, conspiracy to commit armed robbery, assault with a deadly weapon with intent to kill and larceny. Ballew was charged with similar crimes while being held in the Guilford County Detention Center.