Betty Dan Spencer remembered as a woman of many talents, high standards 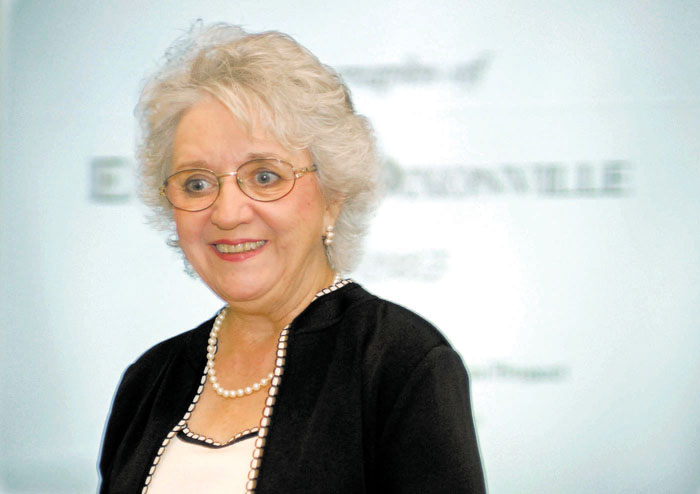 Salisbury Post file photo Betty Dan Spencer speaks at a program at the Stanback Room of the Rowan Public Library on the Wiley Lash photographic collection of Salisbury’s Dixonville on June 21, 2007. Spencer died on Sunday.

SALISBURY — Betty Dan Nicholas Spencer was a force of nature. She sweated the details, whether it was in her roles as a businesswoman, mother, pianist, collector, author, historian or friend.

Her oldest child, Anne Scott Clement, says her mother had high standards in everything she did. You could see it in the simplest of things, such as Betty Dan’s exquisite penmanship or the way she perfectly wrapped gifts going out of her onetime Salisbury store, B.D. Originals.

But on a broader scale, Betty Dan’s attention to doing things right revealed itself in her research into history, from family genealogies to forgotten cemeteries to whole communities.

Betty Dan Spencer, 84, died early Sunday morning. She had been struggling with heart issues the past four weeks and had been in and out of the hospital during that time until one last significant cardiac event Friday.

Betty Dan’s interest in local history consumed her later years, which she lovingly shared with husband Bobby Spencer, who constantly drove the pair between their home on High Rock Lake and all the places his wife had to be in Salisbury.

And there were plenty, whether it was poring over volumes in the History Room of Rowan Public Library, or attending meetings about Dixonville Cemetery, History Club gatherings at Rowan Museum or board sessions with Historic Salisbury Foundation. 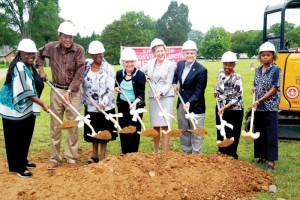 Bobby Spencer died in October 2019, and several people hearing of Betty Dan’s death this week mentioned how the two are probably back together now, dancing. With typical resolve, Betty Dan didn’t stop after losing Bobby.

One of the more recent things she did was drive herself almost daily to friend Gordon Hurley’s downtown office, where she set about the task of organizing archives of the Holmes-Hurley family.

“She was so talented in so many different ways,” Anne Scott said. “Everything she did, she did well.”

Stepping into Betty Dan’s basement at her lake home was like visiting a college library, where she had organized, catalogued and indexed volumes of her own research with its accompanying photos, documents and meticulous handwritten notes.

Her daughters — Betty Dan had five children and eight grandchildren — collaborated on their mother’s newspaper obituary, which said in part, “But most of all, Betty Dan was a vault of knowledge. She was willing to help everyone that asked her with their family’s research, often answering questions off the top of her head.”

Beth Shafer says she and her husband, Dr. Frank Shafer, had “many fine dinners” with Betty Dan through the years.

“The thing that impressed me the most,” Beth says, “is that she could talk for hours about the history of Salisbury and give dates and names. I always wanted to know how she could remember all the history.”

She wrote and researched a history for the 100th anniversary of Goodman Lumber Co.

“Betty Dan was generous to a fault with her time and her extensive knowledge of Salisbury and its history,” says Karen Hobson, former executive director of Historic Salisbury Foundation. “… Those of us who had the pleasure of knowing or working with Betty Dan take great pride in her positive and tangible impact on Salisbury.”

Betty Dan could recount, for example, the history of the Travelers’ Club, which helped to establish Rowan Public Library. She could tell you biographies of men behind Salisbury’s street names or give details about the onetime “Salisbury’s the Place” sign next to the Yadkin Hotel.

She marveled in the story of Maxwell Chambers’ freed slaves and their journeys to establish new lives in Oberlin, Ohio. She gave talks on buildings such as the Empire Hotel. She helped with exhibits at Rowan Museum. She assisted others with filling in holes in the history of the 1825 Archibald Henderson monument at the Old Lutheran Cemetery.

Not long after returning to Salisbury in the early 1980s, Betty Dan immersed herself in the genealogy traced to Michael Braun, one of her early Rowan County ancestors, and that proved to be a springboard into other history pursuits.

Always curious, she could be absorbed in a multitude of stories from the city’s past. She became fascinated, for example, with infamous outlaw Otto Wood, who died in a Salisbury shootout in 1930, and likewise delighted in knowing about the Sparks Circus, which at times wintered in Salisbury.

“When we received documents and old photographs, she’d get as excited as we did,” says Kaye Brown Hirst, retired executive director of Rowan Museum. “… Her mind was unbelievable. So much attention to details. We’d send so many calls and requests her way for genealogical information on the Brown-Fisher families.” 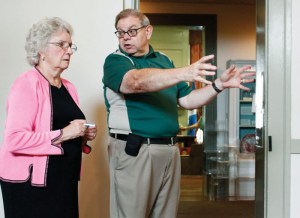 Betty Dan Spencer, lifelong friend of Elizabeth Dole, listens as Terry Holt describes where items will be displayed for the Elizabeth Dole Exhibit at the Rowan Museum on May 23, 2012.

Hirst says Betty Dan was an expert researcher who knew how and where to dig for answers.

“She didn’t back down from a hard research project,” Hirst says. “She and I spent a lot of time together through the Rowan Museum, as I would often run things by her for proofing. If I didn’t, she did it anyway. She used to really chastise me for my grammar and abbreviations in emails and remind me that one of my majors in college was English.”

Betty Dan had no patience for obvious mistakes or lack of effort.

Some years back, she brought to the city and state’s attention that the N.C. highway historical marker noting the life of Salisbury author Christian Reid (the pen name for Frances Fisher Tiernan) had a wrong birth date for the author.

It should have been “1846,” not “1876,” as the state had etched into not just one, but two markers. Betty Dan rejoiced the day that it was finally corrected.

“I admired her tenacity, her flawless research and organizational abilities — and her dedication to sharing her knowledge of local history with the community,” says Janet Gapen, retired planning director for the city of Salisbury.

Maybe Betty Dan Spencer’s three greatest legacies — from local history’s point of view — were her research and book on Dixonville and the East End, her work connected to the History and Art Trail in downtown Salisbury and, unknown to most, her behind-the-scenes effort to save the Fulton-Mock-Blackmer House on South Fulton Street.

“Betty Dan quietly initiated the discussions that led to the sale and renovation of the Fulton-Mock-Blackmer House,” Hobson says.

Betty Dan brought Johnny Blackmer to the table, Hobson adds, and helped in paving the way for him to sell the house to Historic Salisbury Foundation, leading to its ultimate preservation by the Dixon family.

“Betty Dan contributed countless hours to city initiatives, including the History and Art Trail in downtown Salisbury,” Gapen says. “Her command of Rowan County history and her extraordinary attention to accuracy and language clarity were invaluable to the committee developing the text for each marker.”

Gapen also notes how Betty Dan taught herself computer skills and used specialized publishing software that designed the templates necessary for casting the markers into bronze. She  learned how to incorporate historical documents and photographs into that process.

“She was known to work well into the night at times to get the best possible composition of text and imagery down to the minutest detail,” Gapen says, “and her persistence lives on in these beautiful, artful markers that grace the downtown.”

Anne Scott Clement says one of the things her mother was proudest of was receiving a Dr. Martin Luther King Humanitarian Award in 2008. It came for her research related to Dixonville and the East End, an area of Salisbury that disappeared in the urban renewal efforts of the 1960s.

Before the business structures, houses and outbuildings could be removed, everything had to be appraised, which led to 600-plus photographs being taken by the appraisers. Eight sets of those photographs were printed, and two of the sets ended up in the Rowan Public Library.

Betty Dan credited Wiley Lash, a member of the Redevelopment Commission and later a Salisbury mayor, for recognizing the significance of the photos and making sure they were preserved.

“Upon seeing the photographs,” Betty Dan wrote in the preface of her book about Dixonville, “I could not believe the quantity and incredible quality of these 46-year-old snapshots. My immediate reaction: What if people could once again see the houses they had called home?

“Thinking it would be helpful if digital images were available, I offered to scan the pictures and identify them.”

This led to a 20-month project deeply involved with former residents of the community, a library exhibit and a beautifully researched and handsome book that she self-published.

Betty Dan Nicholas Spencer grew up in Salisbury and was daughter of Dan and Murtis Nicholas. Rowan County’s huge park, Dan Nicholas Park, is named for her father.

Betty Dan belonged to the Class of 1954 at Boyden High School and was lifelong friends with many of her classmates, which included former U.S. Sen. Elizabeth Dole and Wyndham Robertson, a well-credentialed journalist, educator and former head of UNC Public Television.

In May 2011, Dole and Betty Dan combined forces to treat 480 students and 70 teachers at Hanford Dole Elementary to an all-day field trip at Dan Nicholas Park. It was fitting, since the school was named for Dole and the park for Betty Dan’s father.

Betty Dan attended Randolph-Macon Woman’s College and Northwestern University. She studied music and was a concert-level pianist, according to her family. She married, settled in Fayetteville and established her first B.D. Originals store there, full of unique items.

To care for her ailing mother, Betty Dan moved back to Salisbury in 1982. She immediately renovated the stately Cannon-Guille House on South Fulton Street and subsequently sold it to Paul and Sue Fisher after her marriage to Bobby. With Anne Scott, she also opened a new B.D. Originals at the corner of South Main and West Fisher streets.

As stubborn and demanding Betty Dan could seem, she possessed a heart of gold.

“A very giving lady,” Hirst says. “She could just smile at you and make you happy. I cherish every gift and card I’ve received from her over the years. But we could disagree. We did many times, but we’d work it out.

“I will miss her. This community has lost an unbelievable mind.”

Anne Scott says Christmas was her mother’s favorite time of year. When Anne Scott was growing up, Betty Dan decorated every room of the house, often with things collected by herself, mother and grandmother.

One of Anne Scott’s most treasured keepsakes is a 1995 Christmas scrapbook, a personalized memento Betty Dan gave to each of her children. In the scrapbook was a passage from Thomas Fuller that Anne Scott says might speak to what her mother was all about.

It says the following:

When thou makest presents
let them be of such things that will last long;
to the end they may be in some sort immortal,
and may frequently refresh the memory of the receiver.