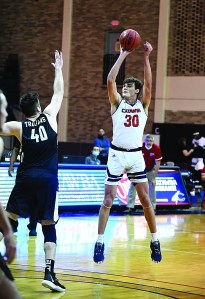 Catawba’s Ben Bowen had a double-double in Saturday’s loss at Lenoir-Rhyne. File photo by Wayne Hinshaw, for the Salisbury Post

HICKORY — Catawba’s men’s basketball team had to endure a two-week wait between South Atlantic Conference games before it  returned to action on Saturday.

It’s still been three weeks since Catawba’s last victory. The Indians fell to Lenoir-Rhyne 93-86 at Shuford Gym. The Bears were making their debut.

Catawba (1-2, 1-2) turned in an improved offensive performance from a dismal showing against Wingate, shooting 50.8 percent for the game and making 11 3-pointers on 25 attempts.

Defensively, the Indians still have work to do. Lenoir-Rhyne shot 57.4 percent for the game and 10-for-23 from the 3-point line.

Catawba did an outstanding job on the boards, limiting the Bears to one offensive rebound for the game. The 6-foot-10 Bowen had 10 rebounds.

Catawba led by five early, but Lenoir-Rhyne took a 44-40 lead at the break.

L-R took its biggest lead at 56-44 on a dunk by R.J. Gunn, who led the Bears with 22 points, three minutes into the second half. A 3-pointer by  Phillips triggered an 11-0 Catawba run to get the Indians back in it.

Catawba grabbed the lead with 10:40 remaining on a 3-pointer by  Whitfield, and the Indians pushed ahead by four points at the 7:32 mark.

It was 75-all with under three minutes to go, but that’s when Darius Simmons scored six straight points for the Bears on two free throws and two layups.

The Bears maintained control from there.

Catawba welcomed back McLeod, but played without Marcus Burwell and Ace Carter.

Catawba is scheduled to play Lincoln Memorial at 1 p.m. at home on Wednesday.