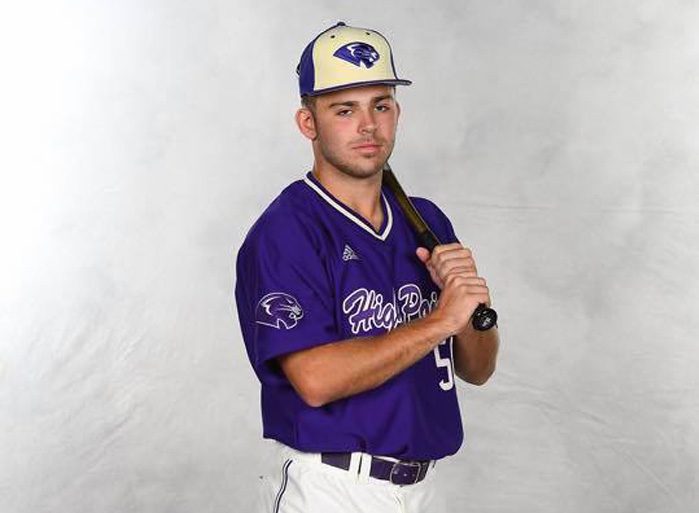 The East Rowan graduate wrapped up his first semester of college exams, taking on monsters chemistry and biology back-to-back. Then he still had time to battle some ornery leaves and make a little money at his part-time landscaping job before darkness closed in.

“Another day, another dollar, and now I’ll get to take a little bit of a break,” Klingler said. “I enjoyed my first semester of college, but the academic workload at High Point was eye-opening.”

To the surprise of no one who has watched him swing, the young catcher did some eye-opening of his own when Division I High Point held baseball tryouts.

The coaches weren’t completely taken by surprise by Klingler. They had seen him play before. They knew he wanted to play.

“Coach called me three days before tryouts started and said they were going to treat me like everyone else and I was going to be expected to do everything the guys already on the team were doing,” Klingler said. “It was a glorified tryout, but the first thing I was able to show them, in the weight room, was that I’m pretty strong for my size. Then we started hitting, and that’s what I do best. The coaches were pleased with my hitting. There were a couple of catchers who weren’t able to be there, so I got to catch more than I expected. I caught some bullpens, got a lot of looks as a catcher.”

On the first weekend of intrasquad games, Klingler got hot at the plate. He made only two outs in four games and was well on his way to earning the purple and white uniform of the Panthers.

“Then the second weekend, I did come back down to earth a little bit, to use the words of the coaches,” Klingler said. “But when we finished up with our fall World Series. I did OK.”

Klingler did well enough that when he had his exit meeting with the coaching staff, he was informed that he not only made the squad, he’ll get a shot at playing time. He’ll be counted on to have a role on the team in the 2021 season.

Klingler was quite a ballplayer at East. He’s not a typical catcher. He runs like an outfielder. He was athletic enough to play shortstop for the Mustangs when he was a freshman jayvee.

Besides being able to move around, he’s one of those guys who can roll out of bed and get a base hit. Fastballs or breaking balls, up or down, in or out, it never mattered  much to Klingler.  The lefty swinger turned just about everything he saw into a line drive. He batted .358 during three varsity seasons with the Mustangs. He might have challenged the .500 mark as a senior if COVID-19 hadn’t killed the 2020 season when he was 11-for-20 and had coaches shaking their heads and pitchers ducking.

Klingler isn’t a household name because he opted to play several years for the South Charlotte Panthers showcase team rather than American Legion ball, but he showed up at Newman Park last summer to suit up for the Rowan County NC3 team and quickly established himself as the starting catcher and leadoff man. He batted .385 with 37 runs scored, 29 RBIs and 14 doubles despite a relatively short schedule. When the leadoff man is second on the team in RBIs, that indicates he can hit.

His hitting philosophy is pretty basic. He doesn’t overthink.

“I try not to strike out,” Klingler said. “I also don’t walk very much because I usually see a pitch I can hit before I can walk.”

Klingler might have attracted a half-dozen scholarship offers to mull over if East, which likely would have been a state championship contender in 3A, had been able to play out the 2020 season. There were coaches who had promised to come to watch Klingler, but then, suddenly, there were no games to scout.

As much as the abrupt end to his high school career stung, Klingler took it all in stride. As exceptional as he is at hitting baseballs, he’s always been a student first.

His college choice always was going to be based primarily on the academic side of things. His career goal is to become a dentist. High Point has a strong pre-dental program and it’s only 40 miles from home.

High Point offers 47 undergraduate majors. Klingler’s sounds like the scariest of those 47 — biochemistry.

“I’ve talked to the professors about being part of the baseball team,” Klingler said. “They said they’d never had a guy on the baseball team who was going through the dental program. I know it’s going to be a challenge, but this is what I want to do.”

Klingler said 75 percent of his first-semester classes were in-person, with 25 percent virtual. Like just about every student, he much prefers being in the classroom.

Now with some rugged exams in the rearview mirror, he’ll take a break, try to save some money and get ready to tackle a unique combination of chemistry and baseball next semester.

“Charlie can hit — he can really hit,” said Jim Gantt who coached Klingler in NC3 baseball. “As a catcher, he doesn’t have the strongest arm, but he makes up for it with a very quick release. He’s also got an upbeat personality. He’s a fun guy to have on any team.”