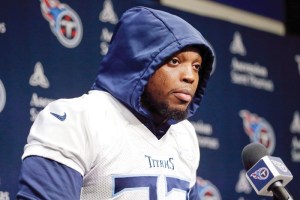 INDIANAPOLIS (AP) — Derrick Henry battered the NFL’s second-stingiest defense for 140 yards and three touchdowns in the first half, finished with 178 yards and led the Tennessee Titans to a crucial 45-26 rout of the Indianapolis Colts on Sunday.

The win gives Tennessee (8-3) sole possession of the AFC South lead, a split in the two-game season series and a tiebreaking edge based on current division records of the teams. Henry also padded his lead as he chases a second straight rushing crown.

He has three straight 100-yard games and eight consecutive road games with 100 or more yards, tying former Titans running back Chris Johnson for the second-longest streak since the 1970 merger. Only Hall of Famer Barry Sanders (10 in 1996-97) had a longer streak.

Henry touched the ball on six of Tennessee’s first 10 plays and capped the opening drive with a 12-yard scoring run.

After the Colts (7-4) tied the score at 7 with an 11-yard pass from Philip Rivers to Trey Burton, Ryan Tannehill hooked up with A.J. Brown on a 69-yard scoring play. When the Colts tied it again on Jacoby Brissett’s 1-yard TD run, Henry went back to work.

He scored on a 1-yard run midway through the second quarter, added an 11-yard TD run to make it 28-14, and was used as a decoy on Tannehill’s 1-yard TD run that gave Tennessee an insurmountable 35-14 halftime lead.

Tyreek Hill scored on receptions of 75, 44 and 20 yards, backflipping into the end zone on his second TD, and finishing with 13 catches for 269 yards — the last an 8-yard catch on third-and-7 to give Mahomes an opportunity to run out the clock.

The Chiefs (10-1) won their sixth straight game and clinched their seventh 10-win season in eight years under coach Andy Reid.

The reigning Super Bowl champions improved to 6-0 on the road and have won nine straight away from home going back to last year.

Brady was 27 of 41 for 345 yards, three touchdowns and a pair of second-half interceptions in falling to 2-2 in four career meetings against Mahomes, who built an early 17-0 lead and also had the Chiefs up by 17 entering the fourth quarter.

Brady responded with TD passes of 31 and 7 yards to Mike Evans, the latter trimming Tampa Bay’s deficit to 27-24 with 4:10 remaining.

The Bucs never got the ball back.

The Packers (8-3) scored touchdowns on each of their first three possessions and grabbed a three-game division edge over Chicago (5-6) and Minnesota. Since winning five of their first six games, the Bears have dropped five straight.

The Packers capitalized on mistakes by Bears quarterback Mitchell Trubisky, who was making his first start since the third week of the season. Trubisky threw three touchdown passes — including two to Allen Robinson — but also committed three turnovers that led to Packers touchdowns.

Darnell Savage picked off a pair of Trubisky passes for his first two interceptions of the season. After Za’Darius Smith sacked Trubisky and forced a fumble, Preston Smith picked up the loose ball and ran 14 yards for a touchdown that gave the Packers a 27-3 lead late in the second quarter.

MINNEAPOLIS (AP) — Chad Beebe caught a 10-yard touchdown pass with 46 seconds left for Minnesota shortly after he muffed a punt that let Carolina pad its lead. Then Joey Slye missed a 54-yard field goal try with 1 second remaining that preserved the Vikings’ victory.

Kirk Cousins went 34 for 45 for 307 yards and three scores for the Vikings (5-6), hitting Justin Jefferson for his second touchdown grab with 5:38 to go and finding Beebe for the winner to punctuate a seven-play, 75-yard drive that took 65 seconds.

There were 38 points scored by both teams in a dizzying second half that started with Panthers rookie Jeremy Chinn turning fumble recoveries into touchdown returns on consecutive plays from scrimmage. Sixty-nine seconds into the third quarter, the Panthers (4-8) suddenly were up 21-10.

After Beebe dropped his fair catch and Myles Hartsfield recovered at the 9, shortly before the 2-minute warning, the Panthers played it safe with a pair of running plays. Bridgewater misfired for an open D.J. Moore on third down, and Slye — who had a short field goal blocked earlier — made a 21-yarder to push the lead to six points.

Cousins responded with the kind of late-game go-ahead drive that’s been mostly missing during his three seasons with Minnesota.

James White rushed for two touchdowns for the Patriots (5-6). It was the second time this month that Folk hit a last-second game-winning field goal. His 51-yarder beat the New York Jets 30-27 on Nov. 9.

Cam Newton struggled, finishing 9 of 18 for 84 yards and two interceptions, and New England had only 179 yards of offense. But the Patriots took advantage of Cardinals mistakes.

Kyler Murray finished 23 of 34 for 170 yards and an interception. Murray had 31 rushing yards and was held without a touchdown pass for the first time this season.

Nick Mullens passed for 253 yards and led two late scoring drives in his first victory as a starter since September for the defending NFC champion Niners (5-6), who stoked their flickering playoff hopes and became the first team to beat the Rams (7-4) at new SoFi Stadium.

After a game largely dominated by defense, Gould hit a 44-yard field goal with 3:11 left before San Francisco stopped Los Angeles near midfield. Fullback Kyle Juszczyk converted a fourth-and-1 with 28 seconds to play during a 56-yard drive in the final 2:10 to set up Gould, who nailed his third field goal of the day.

Rookie defensive lineman Javon Kinlaw returned an interception 27 yards for a touchdown as San Francisco forced four turnovers, including two interceptions and a fumble by Jared Goff in his latest erratic performance.

Aaron Donald forced a fumble and Troy Hill returned it 20 yards for a touchdown late in the third quarter, but the Rams’ top-ranked defense couldn’t keep the Niners out of field goal range late.

Goff passed for 198 yards in a rough offensive game from the Rams, who slipped out of first place in the division.

DENVER (AP) — Taysom Hill’s two touchdown runs led New Orleans past Denver, which was thrust into a quarterback quandary when its passers failed to wear masks as mandated by the NFL’s COVID-19 protocols.

In a grind-it-out slugfest reminiscent of pro football’s early days, the Saints (9-2) won their second straight game with Hill subbing for the injured Drew Brees. Hill wasn’t nearly as sharp as a week earlier against the Falcons, when he completed 18 of 23 passes for 233 yards.

And that was much better than Broncos QB Kendall Hinton, a rookie receiver and former Wake Forest quarterback from their practice squad who made a shaky NFL debut by going 1 for 9 for 13 yards, no touchdowns and two interceptions.

Sometimes, the Broncos had their running backs take direct snaps. But the Broncos converted just once in 10 third-down tries.

The Raiders (6-5) lost their second in a row and looked very much like a pretender in the AFC playoff race, producing a listless, mistake-filled performance against an Atlanta team that’s playing out the season under an interim coach.

Carr had a miserable day, fumbling the ball away three times in addition to delivering the pick that the Falcons linebacker returned for his fifth career TD.

Las Vegas had a season-worst five turnovers in all and was flagged 11 times for 141 yards, with one penalty wiping out an interception and another allowing the Falcons (4-7) to keep the ball after a missed field goal.

Atlanta led 16-3 at halftime, and Jones sealed the game early in the third quarter.

Carr was swarmed by the pass rush and threw behind running back Devontae Booker on a short pass over the middle. The ball went right to Jones, who streaked all the way to the end zone with no one even close.

Tagovailoa was inactive with a left thumb injury, so Fitzpatrick stepped in against one of his many former teams.

The veteran quarterback was 24 of 39 for 257 yards with TD throws to tight ends Mike Gesicki and Adam Shaheen, helping the Dolphins (7-4) bounce back after having a five-game winning streak end last week.

New York got its starting quarterback back as Sam Darnold played after missing the last two games with a shoulder injury. But he was unable to get much going for the offense, with coach Adam Gase appearing to reclaim play-calling duties after offensive coordinator Dowell Loggains had done so the last three games.

Darnold was intercepted twice and the Jets (0-11) twice couldn’t take advantage of takeaways by the defense. Darnold was 16 of 27 for 197 yards.

Josh Allen threw for a touchdown and ran for another score for the AFC East-leading Bills (8-3), who hung on after nearly blowing an 18-point third-quarter lead. Receiver Cole Beasley also completed a touchdown pass.

Buffalo turned the ball over on three consecutive possessions, but its defense limited Los Angeles to Michael Badgley’s 27-yard field goal during the key stretch.

Buffalo’s three drives ended with running back Devin Singletary losing a fumble at midfield, Allen muffing a snap at the Chargers 22, and then Allen throwing an interception to Michael Davis.

Two plays after the Chargers (3-8) regained the ball at their 44, Justin Herbert faced third-and-6 when he forced a pass over the middle intended for tight end Hunter Henry, only to have White jump in front of the ball.

Bass connected for the Bills with 3:26 remaining.

Herbert finished 31 of 52 for 316 yards, upping his season total to 3,016 and joining Kansas City’s Patrick Mahomes as the only players to top 3,000 yards passing in their first 10 career starts.

The Jaguars (1-10) fired general manager Dave Caldwell after the game, which was its 10th straight loss.

Mayfield connected with Jarvis Landry and Austin Hooper for scores, ending a three-game drought without a passing TD. Mayfield nearly had two more, but he inexplicably missed wide-open Rashard Higgins in the end zone in the second quarter, then watched Harrison Bryant drop another early in the fourth.

Mayfield’s worst misfire was nearly costly. He threw behind Kareem Hunt in the flat on a third-and-1 play late, and Hunt failed to pick up the first down on the ensuing down.

Jacksonville ended up with a chance to tie. James Robinson’s 4-yard run made it 27-25, but Mike Glennon threw incomplete on a 2-point conversion attempt for the second time in the game.

Jones went down after completing a short pass in the third quarter with the game tied at 10. He returned for two plays on the next series but then was relieved by backup Colt McCoy, who played the rest of the game.

Wayne Gallman Jr. ran for a 2-yard touchdown on fourth-and-goal in the first quarter, and Graham Gano returned from the COVID-19 list to kick four field goals as the Giants (4-7) moved into a tie with Washington for first place in the woeful NFC East.

The Bengals (2-8-1) started quarterback Brandon Allen, a player who was promoted from the practice squad, in place of rookie Joe Burrow, who suffered a season-ending knee injury in last week’s loss to Washington.

Allen was 17 for 29 for 136 yards and Cincinnati mustered just 155 total yards of offense.

Nonetheless, the Bengals had a chance late. A 1-yard touchdown pass from Allen to Tee Higgins — set up by a pass-interference penalty in the end zone — got the Bengals within two points with 2:33 remaining.

Cincinnati got the ball back, but Allen fumbled while being sacked with 57 seconds left to seal it for the Giants.