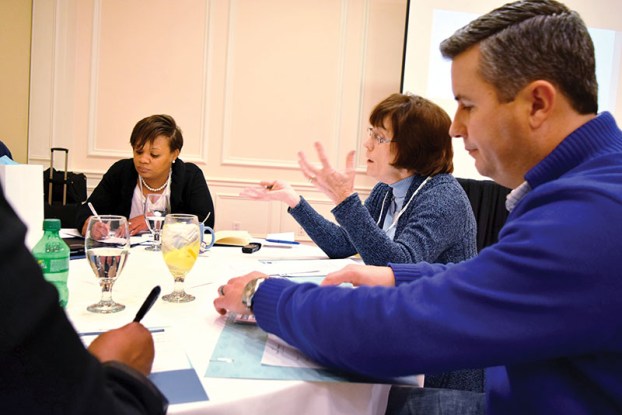 SALISBURY — Susan Cox says she plans to be sworn in and continue to serve on the Rowan-Salisbury Schools Board of Education after what appeared to be a surprise election night win on Tuesday night, but she does not intend to stick around.

At the beginning of the year, Cox announced her plan to not run for reelection to the board, but she filed after it appeared no one else was running. She has served eight years so far, and handily won her other contests.

Cox said she and her husband sold their house and are living in an apartment. They have been planning a move to Guilford County, closer to family. She does not know how long she will serve if she is sworn in, but does not plan to stay for the entire term and is still securing a place to live in Guilford.

Expecting and working toward a loss, Cox said she was distancing herself emotionally from her service on the board, which she called a highlight of her life, but Tuesday’s result has thrown things in flux. Cox said she “has a lot of thinking to do.”

The retired teacher said she wanted to give up her seat on the board and conceded to opponent and registered nurse Jennifer Studer, publicly declaring support for her opponent. By the end of the night Tuesday, however, Cox had a 900-vote lead on Studer. There are still some absentee and provisional ballots not yet counted, and the Rowan County Board of Elections says it’s possible that school board results could change.

Rowan County Elections Director Brenda McCubbins also said the school board races would need to be within 1% of each other for a candidate to request a recount after all the votes are tallied.

The spread on the race between Cox and Studer was 1.6 points after all the results were in.

Cox can stay on the board if she does not move to Guilford, but candidates cannot serve areas in which they do not live. If Cox resigns, the remaining school board members would be able to appoint someone to the vacant seat. Cox said she would consider recommending a replacement to the board, but she is unsure of who would be willing or available when the time comes.

Studer said she would be willing to serve if the board appointed her.

A full roster for the Rowan-Salisbury Board of Education is seven candidates.

Cox’s efforts to end her tenure on the board even including campaigning for Studer. Cox was at polling sites during early voting on Election Day to tell voters to color the box for Studer instead.

“I really thought that I would lose. I really did,” Cox said. “I worked hard.”

“It was difficult for me to say ‘I’m going to give this up,'” Cox said. “But on the other hand, I felt there was a good replacement.”

Incumbent Josh Wagner did not run for reelection to the seat, citing a self-imposed term limit. Sanborn said she congratulated Hightower, who said she was a great candidate.

Byrd-Clark said it meant a lot for that many people to vote for her, and Barbee said he felt OK about the result.