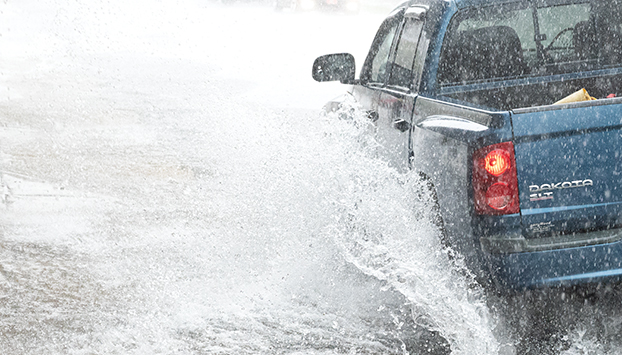 Josh Bergeron / Salisbury Post - A truck on Church Street in downtown Salisbury drives through a flow of water during a storm in August, sending a wave into the air and onto the adjacent sidewalk.

SALISBURY — Getting washed out is not the only problem too much rain can pose for growers.

This has been a rainy year for Piedmont farmers. The verdict varies on exact totals depending on the location in the county, but one site monitored by the National Oceanic and Atmospheric Administration shows 2020 is on track for a record year, recording about 61 inches so far. Another site also shows about 61 inches but is roughly even with precipitation totals from 1929.

The data is not final, but Rowan County Cooperative Extension Director Amy-Lynn Albertson say the rain is creating issues for farmers. Part of the issue is down to timing.

Albertson said it can be too wet to plant, and it can also be too wet to harvest. Hay crops, which become animal feed, want to be harvested dry, for example. Longer harvests also delay replanting.

Grape growers were having a good harvest, but the rain has been causing trouble there as well. Albertson said too much rain can cause the fruit to swell and burst on the vine. Some fruit and vegetables will rot because of too much rain, and a wet season can produce fungus and plant diseases.

Sometimes management methods can become expensive to the point that they are not cost effective. The type of pumpkins used for jack-o’-lanterns are difficult to grow in North Carolina because of disease, and Albertson said this year it will be almost impossible. As it gets warmer, pumpkin crops move farther north and get more expensive.

“It kind of varies crop-to-crop which is impacted worst,” Alberson said, adding a late freeze required some growers to replant. So far, yields are down, she said.

This is just the latest in what has been a streak of years with undesirable rainfall. In 2018 in particular, Hurricane Florence washed over the state with rainfall and broke a number of records.

Albertson said the consistent and moderate rain would be better for irrigation, but climate change is resulting in more erratic weather with stretches of intense rain and dry spells.

Extension Agent Morgan Watts mostly works with livestock, but that includes grain production for feed. Watts said the main impact of rain on those crops is yield, and some areas of the county saw a lot of rain while others were dry. She said yields will be uncertain until harvest is finished.

Albertson noted insurance can help cover losses for farmers, but it will not pay for everything. Every year is a “roll of the dice” for farmers.

For some farmers, there are more challenges this year than weather. Randy Elium, owner of Elium Farm, said he was expecting his plants to arrive this week — already two weeks delayed due to the pandemic — but the shipment has now been delayed further. Elium said his farm and others purchase together to save on freight. That means other locals are waiting as well.

Field workers cut tips from plants in Canada, then they were transported to Virginia, where they are grown up before being delivered to farmers. There were not enough field workers to cut the plans in Canada. So it delayed them getting to Virginia for the next step in the process, he said.

It’s not all bad, though. Elium said planting later results in fewer problems with weeds for strawberries. Back in May, heavy rain kept workers out of the picking fields and the farm had to dispose of a number of berries which were destroyed by the rain.

“I want to sell a No. 1 product to the customer,” Elium said. “It did mess up one week of picking. We still were blessed with a really good crop this year, so I’m not going to complain.”

Elium said he harvested a good hay crop because of the rain, but it was also difficult to dry the harvest properly. Other crops were lush as well.

You have to take the good with the bad, Elium said. Last year, he said, there was almost a hay shortage, but it has been difficult to find times to harvest this year.

“I’m glad God’s in charge of the rain,” Elium said. “I’d have people mad at me because it would be too dry or too wet.”