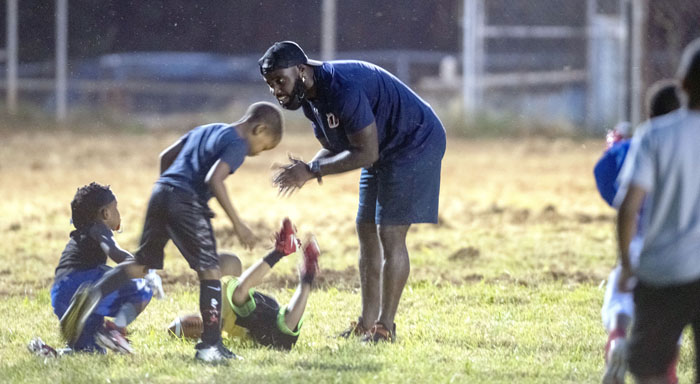 CLEVELAND —K.P. Parks is a full-throttle guy who could sell hay to a Mount Ulla farmer or maybe talk Batman into buying a new cape.

Parks, 28, might even hit you with an enthusiastic “Right on!” now and then, and that expression disappeared long before he was born.

So Saturday’s rainout didn’t do much to curb Parks’ enthusiasm. A flock of the Parks-guided AAU football teams that represent Cleveland’s Defenders Sports Academy were scheduled to play 7-on-7 in Mount Holly, but Mother Nature had other ideas.

“We knew the weather forecast and we were all prepared for a cancellation,” Parks said. “We’ll resume practice this week and play next Saturday.”

Parks, who graduated from West Rowan in 2010, came along at a time when Rowan County football was as good as it’s ever been. In 2009, South Rowan and East Rowan won nine games each. In December 2010, West Rowan and Salisbury won state championships on the same day. A Shaun Warren-propelled Carson squad was stout enough to knock off Salisbury in 2010. North Rowan boasted a promising kid named Javon Hargrave.

He finished his prep football career in the fall of 2009 as Associated Press State Player of the Year and with 30 straight wins and back-to-back 3A titles. As a senior, he averaged 237 rushing yards per game. Before Parks, a 200-yard game was considered as unusual as a man biting a snake.

It was no surprise at all when Parks stood out even among the standouts when he was a high school senior. He was Offensive MVP of the 2009 Shrine Bowl and MVP of the Offense-Defense All-American Bowl in Myrtle Beach, S.C.

After an humbling redshirt year, he delivered outstanding production for the University of Virginia. He rushed 728 times for 3,219 yards, caught 103 passes for 779 yards and put the ball in the end zone 33 times. When he graduated, he was fifth on Virginia’s all-time rushing list and sixth on the touchdowns list.  He had 11 100-yard rushing games, served as team captain and earned a degree. No matter what he did, it wasn’t going to be enough. Whatever he did was always going to be compared to what he did at West Rowan. Still, he did an awful lot for teams that were generally less than stellar and were often playing catch-up.

Parks was deemed not big enough or fast enough for the NFL, although he proved some things, at least to himself, by dominating a pro league in Germany.

Now a high-profile trainer, Parks has made a commitment to work to improve Rowan football from the ground up. That’s his passion.

His toughest opponents are video experiences such as “Call of Duty, “Fortnite,” “Madden NFL 20” and “NBA 2K20.”

His opponents are leisure activities that keep kids confined to a couch instead of romping around outside, choosing up sides and competing physically. Getting physical exercise once was taken for granted in every neighborhood. Kids got off the school bus and played ball until it got dark or until a parent announced it was time for supper.

“People laugh when I tell them that video games are a tough opponents, but it’s so important for kids to stay active,” Parks said. “I can tell you from personal experience that nothing builds character like sports does.”

AAU tackle football, starting as early as age 5, has become a pretty big thing in North Carolina. It’s the platform Parks has chosen to work through.

But then the COVID-19 pandemic came along in 2020. That has brought obstacles, delays and changes.

North Carolina AAU made the decision to push back the tackle football season to February, mirroring the NCHSAA’s decision for high schools.

That postponement until 2021 has slowed Parks down, but it hasn’t stopped him. He’s cut back and found another running lane.

Now he’s pouring his energy into the Defenders’ 7-on-7 flag football squads.

There’s no real contact, but kids are running around outside and it’s a form of football and competition.

“This is what we’re able to do, so we’re doing it,” Parks said. “We’re committed to not letting the virus stop us. We’re providing an avenue for kids to get out and play.”

Parks has about 80 youngsters signed up for teams.  They practice at Kennedy-Hall Legion Post, near the intersection of U.S.70 and NC Highway 801.

“We’re following the protocols and providing a safe environment, but we are trying to normalize things as much as possible for the kids and also their parents,” Parks said. “We’re going to do it right. The important thing is they’re out here playing football and not just sitting around. We don’t want the football kids to be idle until February. We’ve made some progress, and it’s important to keep that progress going.”

Defenders has 6U, 8U, 10U, 12U and 18U squads. Craig Johnson is the patient man who coaches the 6U squad. Park’s former West teammate Kenderic Dunlap coaches the 8U team. Kevin Purifoy coaches the 10U team. Former North Rowan standout Brian Alford and Carson star Tre Williams handle the 12U team. Scotty Robinson, who starred at Salisbury and East Carolina, coaches the older team.

“We’re still looking to grow a lot more,” Parks said. “We’re not filling every age division yet, but it’s a goal to be able to do that. Every year is so important. You might have a 7-year-old who’s not quite ready for 8U, but he would be ready for 7U.”

Each successful play also brought a smile to Parks, who still relishes football as much as he did in his glory days.

“I want these kids to understand what an awesome thing it is to play football,” Parks said. “People love football. Football brings the whooping and the hollering. Good football can bring so much pride and joy to a community.”