MLB: An early look at all 16 potential World Series match-ups 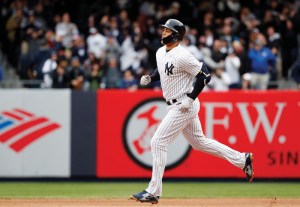 Giancarlo Stanton and the New York Yankees against the L.A. Dodgers looms as one of the more likely World Series match-ups.(AP Photo/Kathy Willens)

Now, baseball really has a 1981 feel to it.
There were already some similarities between the pandemic-shortened season of 2020 and the strike-interrupted version 39 years earlier, but the resemblance is even stronger now that the four division series are about to start.
In 1981, the season was split into two halves, so each division champion from the first half played the second-half champ to start the playoffs. That meant two AL East teams facing each other, two AL West teams, two NL East teams and two NL West teams.
That’s also what we have this season in the AL and NL Division Series: Rays-Yankees, Astros-Athletics, Braves-Marlins and Dodgers-Padres. It wasn’t planned that way. It’s just how the bracket worked out. The teams from the AL Central and NL Central — divisions that didn’t exist in ’81 — happened to be knocked out.
With only four teams left in each league, there are now 16 possible World Series matchups for this year. Here’s a look at each one — and what would make it interesting. The matchups are listed in descending order of likelihood, using probability figures from Fangraphs.com heading into Monday’s action.
___
YANKEES-DODGERS (13.0%)
That 1981 postseason ended with a matchup between these old rivals — the Dodgers beat New York in six games — but we haven’t seen it since in the World Series. It would be fitting for it to happen in 2020.
ASTROS-DODGERS (11.5%)
In terms of pure hostility, this is the matchup to watch for. Houston beat Los Angeles in seven games in the 2017 World Series, but the Astros’ sign-stealing scandal put that victory in a new light, and the Dodgers haven’t taken kindly to it. Los Angeles reliever Joe Kelly was suspended early this season for throwing pitches near the heads of Houston hitters.
Dusty Baker, a standout player for the Dodgers on their 1981 championship team, now manages the Astros.
YANKEES-BRAVES (9.6%)
New York beat Atlanta for the title in 1996 and 1999, and if those series had gone the other way, it would be the Braves, not the Yankees, who would be remembered as the big dynasty of that era.
RAYS-DODGERS (9.2%)
This series would pit Andrew Friedman, president of baseball operations for the Dodgers, against the team he used to work for. It would not do the same for David Price, however. The right-hander, drafted No. 1 overall by Tampa Bay in 2007, opted out of this season for the Dodgers.
ASTROS-BRAVES (8.5%)
These teams had their postseason battles when they were both in the National League, and Baker’s presence would add more intrigue. He’s remembered as an All-Star and World Series champion with the Dodgers, but he was drafted by the Braves and began his big league playing career with them.
ATHLETICS-DODGERS (7.5%)
This, of course, was the matchup that gave us Kirk Gibson’s famous home run off Dennis Eckersley in the 1988 World Series. The franchises also faced off in 1974, when Oakland defeated the Dodgers in five games.
RAYS-BRAVES (6.8%)
It’s no surprise that these teams have little history with each other. Atlanta’s victory over Cincinnati was the first postseason series win for the Braves since 2001. The Rays have only existed since 1998. Atlanta and Tampa Bay are both division champions this year, though.
YANKEES-PADRES (6.7%)
The last time San Diego reached the World Series, the 114-win Yankees were waiting and swept the Padres in 1998.
ASTROS-PADRES (5.9%)
When Houston faced San Diego during the regular season, the Padres took three straight games by a combined score of 22-8, capping a seven-game winning streak. That streak included five grand slams in a six-game stretch, one of which came against the Astros.
ATHLETICS-BRAVES (5.5%)
Believe it or not, there is an old postseason matchup to point to between these franchises: In 1914, the Boston Braves beat the Philadelphia A’s in a four-game sweep in the World Series. Probably doesn’t mean much in Atlanta and Oakland.
RAYS-PADRES (4.7%)
These teams were trade partners on multiple occasions this past offseason. San Diego acquired Tommy Pham and Jake Cronenworth from Tampa Bay for Hunter Renfroe. The Rays also traded reliever Emilio Pagan to the Padres for outfielder Manuel Margot.
ATHLETICS-PADRES (3.8%)
It used to be fairly common for two teams from the same state to play in the World Series, back when the Yankees, Dodgers and Giants were all in New York. Recently, it’s California that has pulled this off the most. There was an all-California World Series in 1974, 1988, 1989 and 2002 — although none of those involved San Diego.
YANKEES-MARLINS (2.3%)
Plenty of storylines here, including a rematch of the 2003 World Series won by Florida, and a chance for Giancarlo Stanton to face his former team. But we know what the dominant angle would be if these two teams make it: Derek Jeter and Don Mattingly going up against the Yankees.
ASTROS-MARLINS (2.0%)
These are the remaining teams with the worst regular-season records. They combined to go 60-60. Of course, if you go by their 2019 marks, then this starts to look like perhaps the biggest mismatch in World Series history. Houston (107-55) finished 50 games ahead of Miami (57-105) last year.
RAYS-MARLINS (1.6%)
The idea of an all-Florida World Series has seemed far fetched for a while, but perhaps it would be an appropriate way to finish this unusual season. Of course, the World Series this year is being played in Texas no matter who is in it.
ATHLETICS-MARLINS (1.3%)
The last time Oakland played in the World Series, the A’s were swept by Cincinnati in 1990. Billy Hatcher was a thorn in the Athletics’ side, going 9 for 12 in that series. Hatcher currently coaches first base for the Marlins.