Clowning around: Local jokers come out of pandemic hiatus for a neighbor 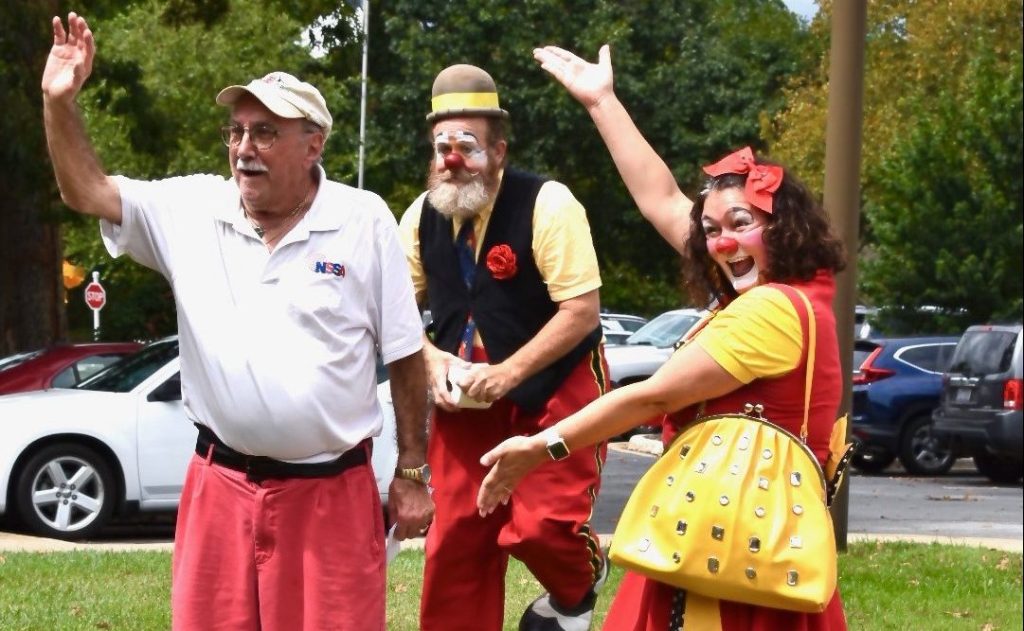 SALISBURY – Salisbury’s local clown power couple had hung up their oversized shoes for about nine months, but they dusted them off on Thursday.

Eric and Kolinda Zander-Hussey, more popularly known as EZ and KoZee, have been involuntarily, and hopefully temporarily, ousted from the clown business since January because of the COVID-19 pandemic. The pair has been performing for decades.

That all changed when they decided to put on a window show for Tom Wolpert, their neighbor who is staying at Trinity Oaks Health and Rehabilitation while his partner Joe Lancione is not.

The pair pulled up to the facility, hopped out of the clown car and put on a show in front of the window to Wolpert’s room. The show was for Wolpert, but neighboring rooms got to enjoy the collection of gags and carnival routines too.

Jessica Swanson, Hospitality and Culture Change Coordinator at the facility, said the window show is not out of the ordinary. Such  visits at the facility have become commonplace during the pandemic, and people have gotten creative putting activities on for residents like holding parades, blowing bubbles, meeting a grandchild, playing music on the lawn and celebrating  a birthday, complete with candles and singing all while separated by a pane of glass.

“It has been very heart warming,” Swanson said.

For one resident with a special affinity for Cheerwine, there was an outpouring of support from the community at the beginning of the pandemic. Cheerwine manufacturer Carolina Beverage Corporation even sent some of the local soda to her to show support.

The Zander-Husseys just told Swanson they wanted to come and be funny. Eric said some people are surprised at how much fun their act is for everyone, and that while some people write off clowning as a show for the kids, the couple makes sure they are entertaining everyone.

They did the social-distanced show because it was a nice thing to do and would hopefully lift people’s spirits. The couple is interested in doing other follow-up shows at Trinity Oaks.

The clowns admitted they were a little rusty, but the show came together better than they would’ve expected when coming back from a normal off-season. The hiatus has not been all bad for them either.

“We were ecstatic, we were so happy that Joe had asked us to do this,” Kolinda said. “It felt great slapping on our makeup again.”

They have picked up day jobs to make ends meet, and Eric’s temporary position with the 2020 Census will end soon, but the time off has given the couple the chance to get out of their 26-square-foot trailer and spend more time in their historic Salisbury home.

The couple would be out and about performing more if not for the pandemic. They said they would spend time joking around downtown if they were not worried about generating a crowd.

Even though the craft is their passion, livelihood and dream, Eric said sometimes such dreams have to come to a stop. The couple is not going to do anything to cause a crowd to gather because they want everyone to be safe.