Back in the building: Some private schools restarted earlier, embraced same cleaning routines 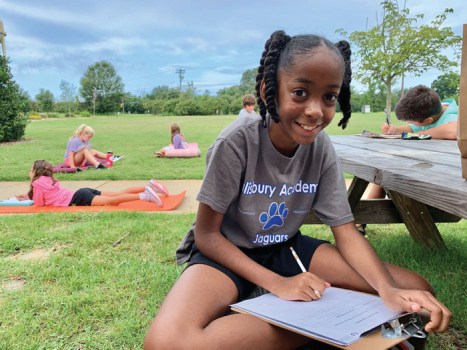 Outdoor learning and play have always been integral at Salisbury Academy and this year take even greater importance given current health and safety protocols. Pictured here, a fifth grade student works with her class outdoors as they build outlines and utilize descriptive writing to craft personal narratives. Submitted photo 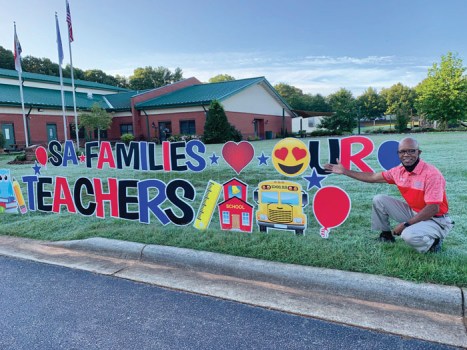 Antwaun Thompson, PE teacher and athletic support staff member, smiles next to a “SA Families Love Our Teachers” sign. School parents surprised faculty and staff with the sign during the first full week of school at Salisbury Academy. Submitted photo 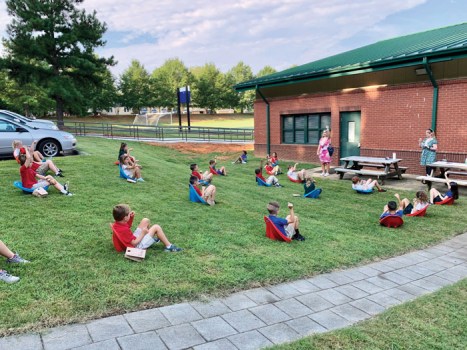 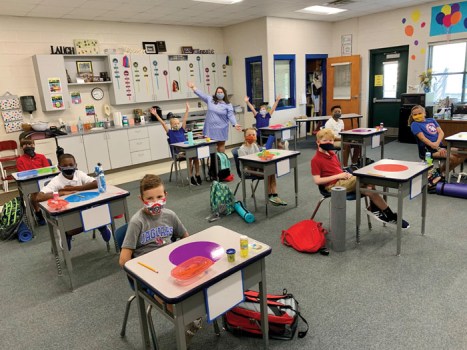 Classrooms at Salisbury Academy have been relocated and redesigned as needed to meet spacing requirements and provide for a healthy, engaging learning experience for students. Pictured here, a fourth grade cohort and teacher Brooke Smith smile from behind their face coverings on the first day of school. Submitted photo

SALISBURY — Students across Rowan County returned to class last week, most of which were in school buildings for just two days. And while the return to classes may look slightly different for those in private schools, all are embracing new cleaning practices.

Private schools are not subject to all the regulations to which public school districts and charter schools adhere. Gov. Roy Cooper’s plan B model which requires the normal student density of a school to be halved to hold classes does not apply.

Sacred Heart Catholic School welcomed its final wave of students in a staggered start on Friday. The school’s plan calls for bringing lower grades to school first on Wednesday for a half-day, upper grades on Thursday and middle schoolers on Friday. Sacred Heart Marketing and Communications Director Robin Fisher said the school wanted to bring students in waves so it could adjust to changes made to control COVID-19. The school is able to meet social distancing standards without a blended schedule.

Like other institutions in the state and other local private schools — Salisbury Academy and North Hills Christian School — Sacred Heart is following guidelines from the health department and requiring face coverings for students and staff, social distancing and frequent hand sanitizing.

Sacred Heart Principal Tyler Kulp said many of the hardest things about the school restart never needed to be considered by educators previously. Kulp had to consider things like calculating how much hand sanitizer and other cleaning supplies would need this year and if there were enough paper towels for extra handwashing. Kulp said the school received masks and face shields early on, but, like other buyers, found some supplies on back order as schools across the country were stocking up to prepare for the coming year.

“It is so nice to have the kids back in the building,” Kulp said. “It’s absolutely unreal. I’ve always said the kids are the heart of Sacred Heart. It’s just been incredible to have them back. Everyone is so happy to see each other whether it’s masked, socially distanced, it doesn’t matter.”

Kulp said he was surprised how ready his staff was for the start of the year. The staff began the year with a meeting — usually widely dreaded four-to-five hour marathons. But this time around, staff members were more engaged and excited about ensuring a successful restart to school, he said. The goal starting out is to keep the same culture and give students as much normalcy as possible.

Kulp said he started looking at plans when school ended last year, and worked with Rowan County Emergency Division Chief T.J. Brown to help figure out how the school would begin again.

Salisbury Academy students returned on Aug. 11. Head of School Beverly Fowler said the school was pleased with how well students did with masking and social distancing on the first day. Students practiced before they arrived and spent part of the first day going over health and safety routines. Educators also modeled those routines for students.

“We’re adjusting hour by hour,” Fowler said. “You adjust when a car pool line takes longer than you expect or you have to have a plan B in place when your health screening app doesn’t work that day. As those challenges have come up, we’ve just regrouped and looked at what alternative options for each of those options. But it’s not without its challenges. That’s for sure.”

Fowler said the Health Department met with Rowan-Salisbury Schools, Kannapolis City Schools, local private schools and Novant Health early in the year to collaborate on meeting safety requirements and it has helped make the school confident it is not in this alone.

She said every school must have plans in place if a classroom, cohort or entire school needs to close, and she is proud of the community helping provide those options to meet the unknown of the school year.

Other measures like daily temperature checks and health screenings are common too. North Hills is also placing plexiglass barriers around desks.

“We really missed our students, and we are thrilled to have them back on campus five days a week,” Executive Director Maria Lowder said in a statement. “Students are happy to see their friends and teachers again, and seeing them learn in ways they haven’t been able to for the past five months brings joy to all of us.”

North Hills was reported as having a COVID-19 cluster at the school by the N.C. Department of Health and Human Services this week, but the school says those cases were identified in staff members who quarantined before students returned to campus on Aug. 12. The school has taken on enhanced cleaning protocols as well.

“We’re still in the process of adjusting to the new safety measures, but even with the safety measures in place, I am so thankful for the opportunity to come back together physically and build deeper relationships with my students. Virtual classes are the next best thing, but there are so many more opportunities to really invest in our students when they are in class,” North Hills high school teacher Sonja Davis said.