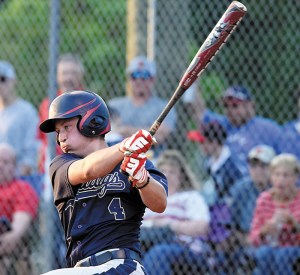 Rowan had mauled Mount Airy 15-0, 11-1 and 10-0 in three previous meetings, but the winless home team got outstanding pitching on Tuesday and nearly pulled off an unthinkable upset. Rowan, third in the league standings, was fortunate to escape Fisher River Park with an 8-3 victory in 10 innings.

It was 2-all at the end of regulation.

Rowan pitchers Ryan Street, Daniel Sell and Cole Hales combined for 16 strikeouts, but Mount Airy outfielder Tristan Harless threw out two runners at the plate and made it anyone’s game for a long time.

Rowan’s Street and Mount Airy’s Reece McDuffie were the starting pitchers. They’d also matched up recently in the league game at Newman Park.

Street was superb again. This time, McDuffie was, as well. His breaking ball was much sharper than in his earlier encounters with Rowan hitters.

Rowan (17-6, 8-4) scored in the top of the first. An error and a steal put Hales in scoring position. Wayne Mize, coming off a 5-for-5 effort on Monday, produced the two-out hit, a smash to left, that provided a 1-0 lead.

Street carried that slim lead to the third, but that’s when Mount Airy (0-12, 0-11) scratched out two unearned runs with a walk, an infield hit, an error and a run-scoring bouncer.

McDuffie kept that 2-1 lead through four innings, then turned things over to Logan Dowell, who like McDuffie is a rising junior at Mount Airy High.

Rowan swung the bats with more authority against Dowell, but still struggled to score.

In the fifth, Bryson Wagner was thrown out at the plate by Harless when he tried to tag up and score on Hales’ fly ball.

Rowan had solid singles in the sixth from Jordan Goodine, Dylan Driver and Logan Rogers, but a double play on Mize’s hard groundball up the middle erased Goodine. Driver stole second but was out at the plate trying to score on Rogers’ hit.

Rowan needed the help of a throwing error on potential double play to finally tie it at 2-all in the seventh.

Sell, prevented from pitching for weeks by a nerve issue in his elbow, kept it 2-all in the seventh, with two strikeouts and the help of a caught stealing.

Dowell and Hales matched zeroes in the eighth and again in a tense ninth.

Hales made the third out in the Rowan ninth, so international tiebreaker rules put him at second base to start the 10th. He wasn’t there long.

Caden Hudson was just trying to push the ball to the right side to advance Hales, but his wheels earned him an infield hit and set up a big inning. Then Mize came through with another run-scoring single. Rowan was up 3-2, its first lead since the third inning.

Everything unraveled from there for Mount Airy. It was 8-2 in a hurry.

McDuffie singled in a run for Mount Airy in the 10th, but Hales, firing fastballs, concluded the game with two strikeouts.

Rowan plays at Mocksville on Wednesday night. Mocksville was off on Tuesday.

Scheduled to play Concord in Faith, the East Rowan Juniors were washed out on Tuesday. They’ll play at West Stanly on Wednesday.