111 years after its dedication, ‘Fame’ hoisted away from West Innes Street 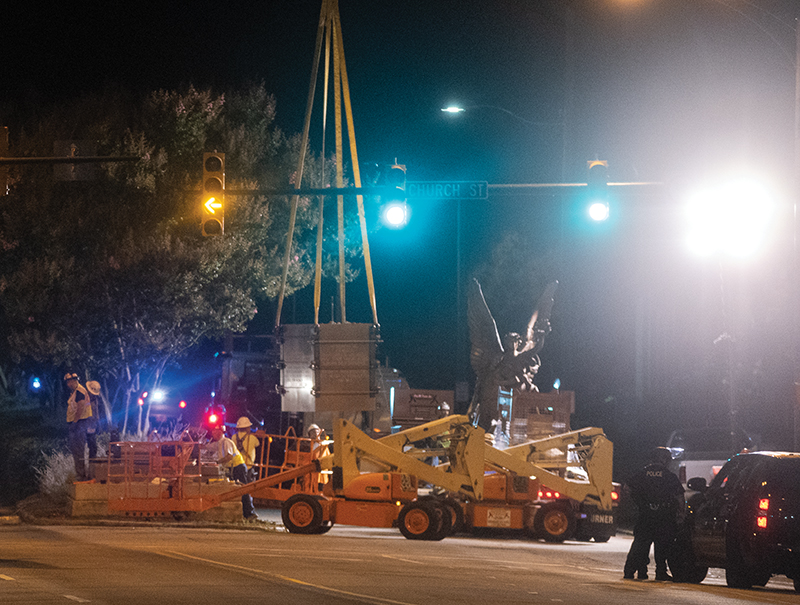 Josh Bergeron / Salisbury Post - The base of the ‘Fame’ Confederate monument is lifted from its position in the middle of Innes Street on Monday. The top of the statue sits in the background on a flat-bed trailer.

SALISBURY — After more than a century in one location, the Confederate monument in the median of West Innes Street was permanently removed from the center of downtown on Tuesday.

Streets were shut down for hours Monday night and early Tuesday as the Confederate monument, known as “Fame,” was lifted piece-by-piece from its pedestal at the intersection of West Innes and Church streets. The removal marks a new chapter in the life of a monument that’s attracted attention for its effect on traffic since the 1940s, opposition for the monument’s symbolism and ties to the Confederacy since the mid-1990s and, more recently, concern about public safety from members of the Salisbury City Council and police chief.

The monument was dedicated in 1909 after the city of Salisbury granted the Robert F. Hoke Chapter of the United Daughters of the Confederacy an easement to land in the middle of Innes Street. Sculpted by Frederic Wellington Ruckstuhl, who was born in France and had a studio in New York, “Fame” had a sister statue in Baltimore that was removed in August 2017 along with all other Confederate monuments in the city. Salisbury’s monument had been removed only once before — when the top was taken for cleaning and restoration in the 1990s. 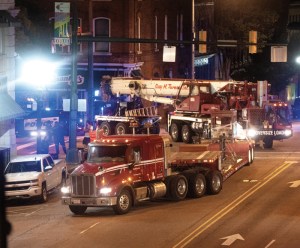 Josh Bergeron / Salisbury Post – A flatbed trailer to haul ‘Fame’ and a crane turn onto Innes Street at the Square.

This time, the city of Salisbury and UDC signed an agreement that requires the city to pay for the relocation. Money raised by private individuals and overseen by the Historic Salisbury Foundation will pay for improvements to its new site — in a historic cemetery with Confederate tombstones on Lee Street.

Immediately, the monument will be placed in an undisclosed storage location until the new site is ready. Salisbury Communications Director Linda McElroy said the initial removal will cost about $20,000 and later phases of the process will add to that cost. 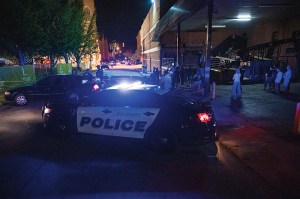 The city of Salisbury started shutting down streets in the downtown core at roughly 9:30 p.m. A heavy presence of police officers kept spectators half a block or more from the statue as crews and machinery moved in. A small crowd and TV news crews gathered at the Square. Others gathered on Church Street next to the Salisbury Post.

Greensboro-based Guy M. Turner, a company that specializes in moving heavy objects via crane, took the statue down beginning with the top figures — a winged muse from Greek mythology holding a wreath high in the air and carrying a dying Confederate soldier who’s clutching his gun. The base below with inscriptions followed in short order. Each piece of the base was loaded onto trailers until only the concrete foundation was left. 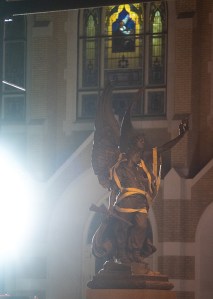 Josh Bergeron / Salisbury Post – Straps were wrapped around ‘Fame’ Monday night before the top of the statue was moved to an undisclosed location for storage.

The foundation was removed with a pair of backhoes, one of which had a jackhammer attachment. By 1 a.m., crews had finished removing pieces of the monument, but workers remained on scene to jackhammer a remaining piece of concrete. The city initially planned to leave roads closed until 6 a.m., but barriers were removed by 3:30 a.m.

City Councilman David Post watched the scene from the Square and said he hoped the removal serves as a “catalyst.”

“I think it’s symbolic, and I hope it’s a catalyst to address the real issues, which are poverty and the fact that 95% of our elementary kids don’t have enough food and that 40% of our population is house poor,” he said. “Those are the real issues. Sometimes, it takes a cataclysmic event to start the ball rolling, and maybe this is that moment.” 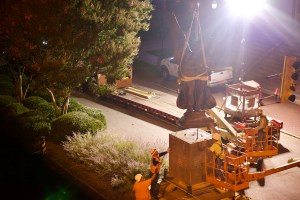 Carl Blankenship/Salisbury Post – The figure at the top of “Fame” being lifted off. There were cheers from the crowds gathered at barriers.

Ed Norvell, a Salisbury resident who’s advocated for relocation and raised money to do so, was emotional immediately after the top part of “Fame” was removed. He’s a descendant of the original group of people who raised money to create “Fame.” But he also has ancestors who fought for the Union and the Confederacy in the Civil War.

“It was incredible to see it lifted,” Norvell said.

As other cities across the country have seen Confederate statues pulled down in protests or riots, Salisbury did so through the political process. Norvell said he was proud of that.

“In Salisbury, we came together,” he said. “We are moving it to a cemetery where its story can be closed.”

Norvell said there has been $65,000 raised for improvements to the site where “Fame” will sit. 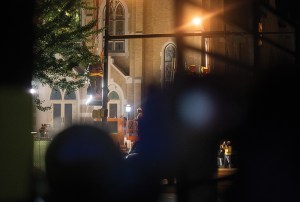 Josh Bergeron / Salisbury Post – The top of the ‘Fame’ Confederate monument is lifted from its base Monday night as a small crowd of people look on. The crowd cheered as the statue was removed.

Watching the statue removal from Church Street was Anthony Smith, who participated in recent protests and attempted to deescalate an incident last month where shots were fired. That incident, which occurred during a peaceful protest, was cited as a key part of a City Council resolution that the statue was a public safety issue if the UDC did not agree to the removal of “Fame.”

Smith said the removal required relationship building, energy and time from people dedicated to the cause over a period of many years. And on Monday night, Smith said he could hear his ancestors saying they were proud of the moment. He pointed specifically to efforts by Mayor Pro Tem Al Heggins during her time as mayor in encouraging people to have conversations about “Fame” as helping to ensure the statue was removed by peaceful means.

Now, he said, it’s time to energize people toward the cause of transforming basic, major institutions around equity and racial justice, including the criminal justice and school systems. 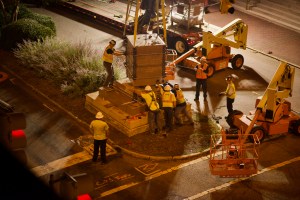 Carl Blankenship/Salisbury Post – The first part of the base being removed. This piece has four inscriptions on each side.

Jill Schneider Smith, who brought a camping chair to watch the removal, said she has lived in Salisbury for five years and thought there was a “disconnect” for a Confederate monument like “Fame” to be displayed in a public place.

“The implications of what the statue was saying never made sense,” Smith said.

She added she was also glad to see the statue removed in a peaceful manner. 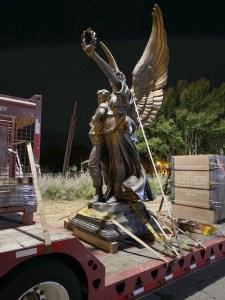 Photo courtesy of City of Salisbury – The top part of ‘Fame’ sits on a flatbed trailer with the inscribed part of the base behind it.

There’s no finite period in which “Fame” is expected to be moved to its new home on Lee Street. Among other things, site plans for the new location include a wrought iron fence, lighting and security cameras.

Asked Tuesday whether he thought Salisbury City Council members would suffer in 2021 elections for their votes to remove “Fame,” Councilman Post said his decision wasn’t about politics or electability.

“In my opinion, I made the right vote regardless of the election,” he said.