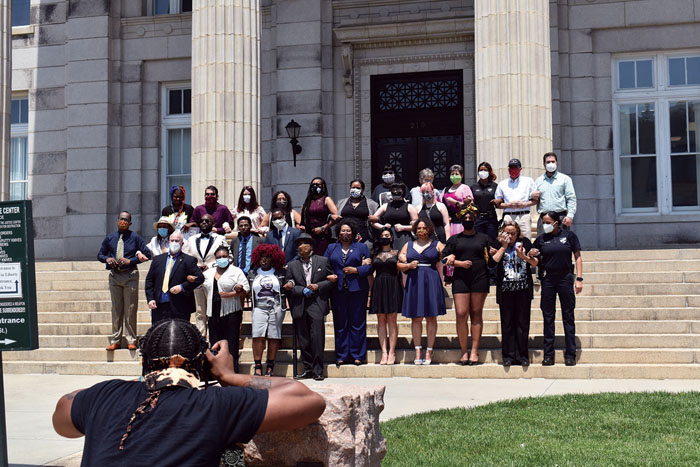 Salisbury Post file photo — A group of protesters gathered at the Rowan County Courthouse in their "Sunday best" on June 4, 2020, to send a message of unity to the family of George Floyd.

SALISBURY — A youth-led group of protesters dressed in their “Sunday best” and gathered at the Rowan County Courthouse on Thursday to send a message of unity and honor the death of George Floyd.

Protests in Salisbury have continued for days following the killing of Floyd, who is shown in a viral video dying when a Minneapolis police officer pressed his knee into Floyd’s neck for several minutes until Floyd stopped breathing. And on Thursday, hundreds gathered at a chapel in Minneapolis for Floyd’s memorial service.

Local photographer Yeddi Lino took photos of protestors raising fists while cycling through chants of “I can’t breathe” and “No justice, no peace” as well as “black lives matter.” Lino also took a video of the chants. Lino, which stands for “life is never over,” runs a photography business called “Lino Visuals.”

Howell said the pictures taken on Thursday will be sent with a sympathy card to the Floyd family’s attorney in hopes the family will receive the message of support.

“It was all about coming together as one to show that Salisbury can stand as one,” Howell said.

He added that the pictures were taken at the courthouse “because we’re looking for justice to be served.”

“Us being the future, it’s our time to step up,” Bolt said.

Arnold said members of her family work in law enforcement and she’s familiar with losing loved ones to gun violence. But those experiences have driven her to enter into the law enforcement field as a detective one day despite any challenges she may face as an African American woman, she said.

“I want people to know that they have people on their side that’s going into the system for good,” she said. “To go to make a difference and a change.”

Koontz said it appears that people are listening and hearing the protests as the movement has spanned all 50 states and multiple different countries.

Scott Huffman, a local Democrat running to unseat U.S. Rep. Ted Budd for North Carolina’s 13th congressional district, was in attendance and encouraged protestors to vote to “put the right people into office.”

“We’ve got to elect people who represent us,” he said, adding, “We need to look out for each other.”

Protesters ended their gathering with a prayer circle, asking God to bring justice.