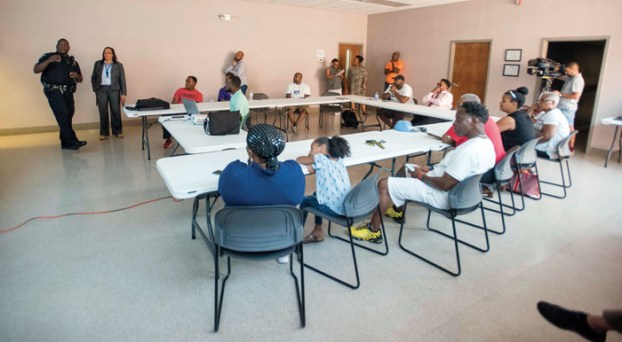 SALISBURY — Mondays are usually pretty busy for Alberta McLaughlin, who has been the Salisbury Police Department’s victim advocate for the previous year.

She can usually be found sitting in court as a pillar of support for victims or acting as a liaison between the victim and the district attorney’s office. She’s the first civilian who has held such a position with the department. Previous victim advocates were law enforcement officers within the department.

“She has a lot of compassion and she feels for people and meets people where they are,” said Capt. Melonie Thompson.

Thompson said McLaughlin has shown kindness to the victims and has even collected money for families during the holidays.

The native New Yorker began her career as a corrections officer with the N.C. Department of Public Safety and later served as a prison chaplain working in both men and women facilities.

McLaughlin, whose mother is a Sanford native, moved south to specifically study African-American churches at an HBCU. That led her to Shaw University Divinity School.

She graduated in 2009 and continued her education where she received a doctorate from United Theological Seminary in Dayton, Ohio. In addition to master’s and doctorate degrees, McLaughlin also has an undergraduate degree in psychology from the College of New Rochelle in New York.

McLaughlin said after serving as a prison chaplain she wanted a change. So, she went on to work for the Rowan-Salisbury School System for two years with its day treatment program, working with Nazareth Child and Family Connection. After working for RSS, McLaughlin began at the Salisbury Police Department.

Often, family members of homicide or other crime victims will sit in McLaughlin’s office for hours as she just listens. And her response to the past year starts with, “I love helping others.”

She said her first year was intriguing because she was able to assist crime victims on their journey as early as the hours immediately following tragedy and continuing to stay through the court process, which requires her to be a liaison for the victim between the police department and the district attorney’s office.

She helped to organize two events — one that highlighted human trafficking and other remembering victims left behind after loved ones have been murdered. In her first year, McLaughlin also worked with Novant Health Rowan Medical Center on domestic violence and sexual assault awareness. She can also be spotted at crime scenes, counseling and consoling families.

Some of her plans for recent months have been sidelined because of the COVID-19 pandemic and subsequent guidelines to not gather in large crowds. She had an April vigil planned for National Crime Victim’s Week, an event to discuss eliminating racial discrimination and as well as an event to recognize sexual exploitation of children. All were canceled but she has plans to feature those events at a later time this year.

Right now, she’s refocused her efforts on helping victims who have been unemployed during the pandemic find work.

She also has a goal to partner with a local fitness center to offer a 30-day membership for victims who could benefit from a membership to relieve stress, McLaughlin said.

McLaughlin recently received her certification from the International Conference of Police Chaplains, an organization that provides training and networking opportunities for chaplains.

While a victim advocate with the Salisbury Police Department, McLaughlin continues to serve as a chaplain at Novant Health Rowan Medical Center. She is also the pastor of two churches — Sandhill United Church of Christ in Aberdeen and  Allen Temple Presbyterian Church in Cleveland.