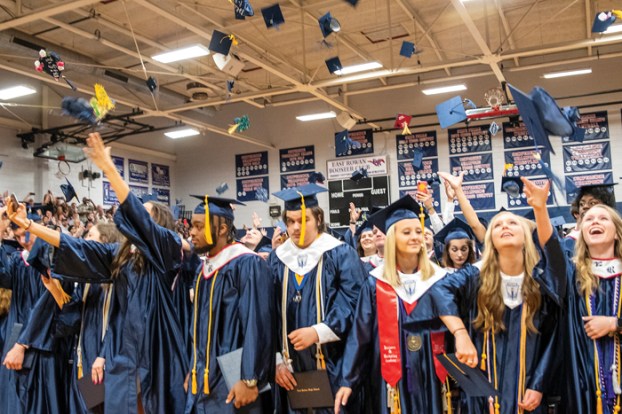 SALISBURY – Seniors have been promised a graduation ceremony at some point, but their last year of high school was cut short, their senior proms are in limbo and they did not realize that Friday the 13th would be the last day in classrooms.

Gov. Roy Cooper in mid-March closed public schools initially, and his order was later extended to the end of the school year. Superintendent Lynn Moody said she did not expect and would not have advised Rowan-Salisbury Schools to reopen amid the COVID-19 pandemic. Regardless, the district would have ended classes in May because it began three weeks earlier than most other districts in the state.

Amid an early end to in-person classes, high schools have been coming up with alternate ways to honor seniors, placing signs in their yards, lighting up stadiums each night and flying banners to honor spring athletes who had their seasons cut short by the pandemic.

Sarah Dyer is graduating this year from East Rowan High School. At first, Dyer said, she was upset about graduation being postponed, but she understands and is accepting of the situation as long as there is a ceremony at some point. When schools closed, Dyer said, she just tried to focus on her e-learning work.

If the school does host a delayed prom, Dyer said she would like to attend, but she is disappointed about missing out on other senior ceremonies she saw going on as a junior.

“At least we still get to have a graduation ceremony,” Dyer said.

Dyer plans to attend the University of Georgia to study business management.

Bella Readling, a senior at Carson High School, said she would like to attend a rescheduled graduation even if it is held in the fall, but she is disappointed she worked to be a top-performing student in her class and would not be able to experience the ceremony at the normal time.

“The last day that I was at school, I didn’t know that was going to be my last day,” Readling said, adding she did not get a chance to say goodbye to her classmates, teachers or get closure on the year. That day was also Readling’s last track meet.

Readling was planning on attending prom, and ordered her dress in October.

“It’s almost a pathway,” Readling said. “You go to graduation, you go to senior beach week, summer then college starts. It’s very disappointing for me.”

Readling plans to attend the University of North Carolina at Wilmington, study biology and chemistry, and go on to medical school.

Megan Mauzy, another senior at Carson, echoed other students who were disappointed in-person classes were cut short and that other traditions like prom are uncertain. Mauzy said she would still like to attend a postponed graduation, which the district has not decided a date for yet.

She will attend Western Carolina University to study communication sciences and disorders.

SALISBURY — The number of people who have recovered locally from COVID-19 topped 100 on Thursday as more individuals tested... read more