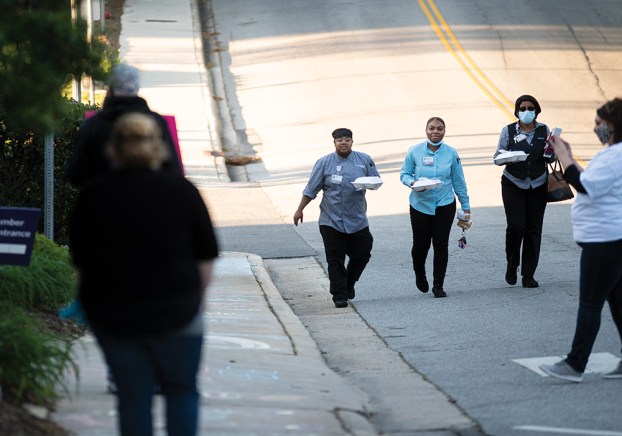 Church members say ‘thanks’ to hospital workers at shift change

SALISBURY — When employees at Novant Health Rowan Medical Center left the hospital Friday evening during shift change, they were greeted with cheers, pathways covered with chalk-written words of encouragement and free dinner.

Members of Destiny City Church and The Refuge in Salisbury teamed up to show their thanks to hospital workers during the COVID-19 pandemic. Together, they had about 250 meals from Wink’s Barbeque, College Barbecue and Il Colosseo to pass out. Workers also were given baked goods from Troyer’s Country Market.

Billy Rollins, pastor at The Refuge, said his neighbor works at the hospital.

“Everyone has a role in what’s going on, but we believe that the people here at Novant have a strategically vital role because they’re administering to a few that affects all of us,” he said. “We want to just lift the arms up and cheer on those who are administering and really caring for the front lines of what’s going on.”

“We just want them to know we love them and we appreciate them,” Vess said. “I wish there was more we could do.” 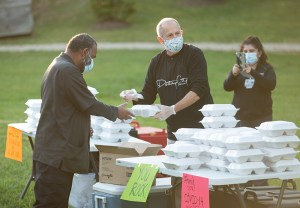 When Amanti Mills, a safety attendant, exited the hospital following her 12-hour shift, she began taking a video of the cheers and people holding up signs. She said it’s sometimes hard coming into work, but it was heartwarming and encouraging to see the support.

“We’re all in this together to fight this together,” Mills said. “We all can’t do it by ourselves. We got to stay at home and fight the spread. It’s encouraging to see us essential workers getting cheered on, because we could be staying at home ourselves.”

Stacey Hilton works in patient access and she often the first person a patient sees. Since the COVID-19 outbreak, she has seen more patients who are nervous to be at the hospital, even though they need to be there.

Hilton said the greeting from churches was heartwarming and touching, and that the community has impressed her during the pandemic.

“It’s nice to see this because hospital employees don’t get the positive reinforcement from society when they come in,” she said. “It makes me feel a lot differently about my surroundings.” 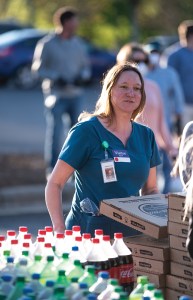 Chris Lockwook, a nurse in behavioral health, said he was “very very surprised and very pleased.”

“It makes you feel special,” he said.

Lauren Miiler, a critical care nurse, said exiting the hospital to see the support made a lot of her fellow employees cry.

“To have them say thank you means a lot,” Miller said. “It makes you realize you are appreciated.”

Rollins said they wanted to show their support for the hospital workers in a way that would relieve some of the stress and burden from their life. A meal can do that. 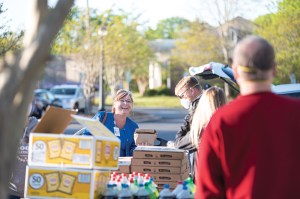 Miller said one of her co-workers was crying at the end of her shift and she knew seeing the support would “lift her spirits” as she exited the hospital later.

“You’re stressing constantly about everything other than yourself,” Miller said. “You’re only thinking about the patient.”

After seeing the impact on a women who got emotional as she left and saw the support, Rollins said he knew they were making a difference.

“All the money, all the effort, all the time was worth seeing that one lady respond,” Rollins said.

RALEIGH, N.C. (AP) — Another 257 cases of COVID-19 have been reported in North Carolina, pushing the total number cases... read more