Ask Us: What is the status of the empty lot at the corner of E. Innes and Lee Streets? 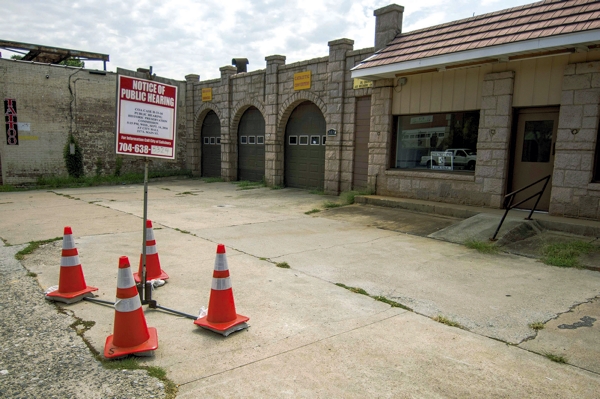 The empty, one-story granite building on the corner of East Innes Street before it was removed to make way for an office and apartment building that's still being planned.

SALISBURY — While development plans have changed, they haven’t been dropped for an empty lot at the corner of Innes and North Lee streets.

A pink granite gas station with a 1930s front used to sit at 201 E. Innes St. The station, which was known as Bankett Station, was taken down in January 2018.

There was a $2.8 million plan in 2018 to build a three-story building on the site, with offices on the first floor and apartments on the two above that. Architect Pete Bogle, representing Bogle firm, submitted those design plans to City Council in July 2018. Then, in February 2019, Bogle said at a city council meeting that the 201 property actually had ‘unsuitable soil.’ But Bogle said that those conditions would still allow for a building to be constructed.

The project was downgraded from a three-story building to a two-story building because of budget constraints, said Todd Dagenhart, the managing partner of Downtown Properties, LLC, which owns the three properties. He’s also a partner with Healthcare Management Consultants, Inc., a tenant for the 201 project.

In May 2019, Dagenhart said that construction would begin in June or July of 2019 and be completed in mid- to late summer of 2020. But a reader recently asked about the status of the project since construction has not yet started. What happened?

Along with the 201 property, the properties of 211 and 215 E. Innes Street are called Bankett Station, Dagenhart said. The original plan of a three-story building at 201 E. Innes St. was modified because of the soil issues and their associated costs, Dagenhart said.

“That was only one hurdle of many,” he said. “In the spring of 2019, it became apparent construction costs were going way up due to a booming economy and our two-story plan would cost too much versus what we could reasonably charge for rent in Salisbury.”

So, the architectural plans were changed to reduce costs and time was spent getting new quotes from contractors, Dagenhart said.

“By fall, we finally found that sweet spot that works,” he said.

The revised plans were approved earlier this year, and those working on the project intend to start work at both 201 and 211 E. Innes Street properties in the spring or early summer of this year, Dagenhart said. Though, that now depends on how much COVID-19 causes delays. Dagenhart said there might be restrictions for subcontractors, he said.

Once the construction is started, both projects will take about 12 months to finish, Dagenhart said.

Once the space at 201 is done, it will be a two-story building. The first floor is going to be leased to Healthcare Management Consultants, Inc., Dagenhart said. The second will have five three-bedroom, two-bathroom apartments and two one-bedroom, one-bathroom apartments.

The 211 property is set to be a commercial office space, he said.