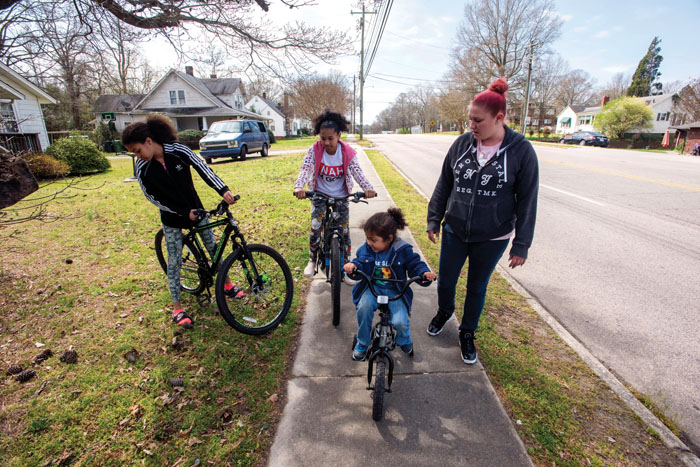 JON C. LAKEY/SALISBURY POST Left to right, Akira Jackson, Makenzie Jackson, Jayceon Gooden and mom Acquoni Mother-of-four, Acquoni Snider, while her current occupation as a head start teacher is delayed, she is applying nature teacher skills onto her children that are all home with her since the family has found themselves together all the time. Snider has set up a plan for the day which includes chores, school work and plenty of free time. . Spencer, NC , 3/18/20

SPENCER — With schools closed, one Spencer mother is making learning fun for children and enjoying quality time with her kids.

Acquoni Snider along with her four children — Makenzie Jackson, 13, Akira Jackson, 12, Jaydian Gooden, 7, and Jayceon Gooden, 4 — have been making the most of their time together. Snider, who is a Head Start teacher, put a schedule together for her children on Monday. Each of her children’s schools sent packets of assignments home for them to continue work.

That daily schedule plans activities from the time they wake to the time they go to bed. Though, Snider says she has been a little flexible about adhering to the schedule. Her schedule includes school work time, chores, lunch and snacks as well as indoor/outdoor activities like yoga, walking the dogs, exercising and a free choice for whatever they want to do.

“I wanted them to stay on a routine with their school stuff, but also with their home stuff. I also threw in some fun stuff so they are not bored,” she said.

I plans change and students remain out of school for longer, Snider said she’ll wing it.

But she said ultimately it would be more of the same: “Make sure they are still learning what they need to learn.”

“The teachers are reaching out and that’s a good thing. They’re asking if you need help. If you don’t know how to do the work, then they are available to help,” Snider said.

Her advice to parents who may not have created a schedule as detailed as her own or is not an educator is to “make the learning fun.”

“That way they don’t get aggravated,” she said. “I know it can be hard being at home with your kids when you’re not used to it. Just make learning fun. Don’t make it all about a deadline.”

Although Snider is focused on creating a fun atmosphere, she also makes sure they stick to their school work. Each of her children has to at least complete two assignments each day.

Her youngest, Jayceon, continues to work on ABCs, colors, shapes and working on alphabet sounds and coloring.

Some fun things that the children have been excited about include getting to go outdoors to ride their bicycles. Her 7-year-old, Jaydian, has been happy for extra time to play the online game, Fortnite.

“They can have free time to do whatever they choose to do for a while,” Snider said.

They also set aside time to bake. She normally bakes by herself, but now while they are at home together Snider said they’ve decided to make it a part of their at-home routine.

Snider has always used a family menu board. But she’s continued to use it to let her children know what’s for breakfast, lunch and dinner.

There’s been so much in the news and online about the coronavirus and it can get to be a bit much for children, Snider admits. She’s intentionally not allowed her children to watch the evening news.

“I don’t want them freaking out and overwhelmed and scared,” Snider said.

Most of all, Snider said she’s excited to be home with her children. It’s almost as if life slowed down. They can watch movies together now that they can take time away from sports and other activities.

“This is quality time that we can catch up and do stuff we haven’t been able to do,” she said.