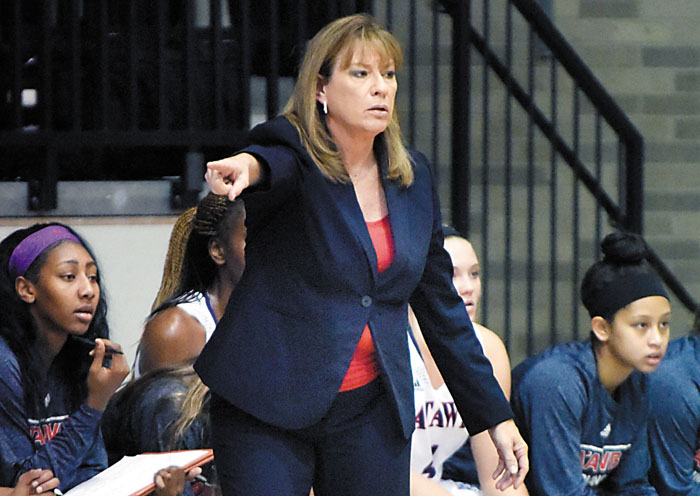 The event, which helps support all of the Catawba women’s athletic teams, had been slated for April 25. It was postponed due to the coronavirus concerns.

Jeff Childress, Catawba’s Associate AD for Athletic Development,  said that a sponsor has been secured to cover the cost of each ticket for the senior women’s student-athletes to attend.

“This will be our second Class ACT Dinner,” said Childress. “Our hope and goal is to turn this event into one that is just as successful as our First Pitch Dinner for the baseball program or the Catawba Football Golf Classic.”

Allen founded FHA & Associates in 2002, with the mission to share with others how to maximize their potential. She also has a sports management practice and represents college coaches in several NCAA division I and II conferences.

From Shreveport, Louisiana, Allen earned a basketball scholarship to the University of Iowa, where she played for Hall of Fame coach Vivian Stringer. At Iowa, Allen earned a degree in Elementary Education and a Juris Doctorate from the university’s  College of Law.

She is a former manager for Nike’s women’s basketball sports marketing division and a team executive for the WNBA’s Charlotte Sting. For several years, Felicia served as the executive director of Leadership America North Carolina — a statewide women’s leadership organization.

In 2010, Felicia was selected from thousands of former Big Ten student athletes to be featured during Black History Month on the Big Ten Conference website.

Morton, also a former student athlete at Catawba, was the Indians head coach for 15 season, 2003-18. Morton’s teams compiled a record of 238-192 during that time, winning two championships.

Morton’s overall record is 336-283, having coached at Pfeiffer University and West Stanly High School, prior to arriving at Catawba.

As a student athlete at Catawba, Morton earned 10 letters, playing basketball, softball and field hockey. In basketball, Morton played in 86 games and averaged 5.5 points, netting a career-high 26 in against Wingate as a senior. She added 163 rebounds and 107 assists. Morton was a .367 career hitter in softball with nine home runs and 74 RBI.

Originally from Stanfield, Morton is a graduate of West Stanly High School. She resides in Albemarle with her husband, Randy. They have four grown children and four grandchildren.

Adams was a cross country runner and golfer at Catawba, before graduating in 2001. She was the South Atlantic Conference’s women’s Runner of the Year in 1997. Adams was also a member of Catawba’s first-ever women’s golf team in 1999-00.

Adams earned a master’s degree in physical education, with an emphasis in health promotion, from Mississippi State University in 2003 and has been a teacher and coach at Erwin Middle School for 18 years. She has been Erwin’s athletic director since 2011.

She was Erwin’s Teach of the Year and a finalist for Rowan County Teacher of the Year in 2017-18.

The Class ACT Dinner includes a cocktail hour at 6 p.m., followed by the main event at 7:00. Tickets are $100 per person. For more information contact Jeff Childress at jchildre@catawba.edu or 704-637-4474.