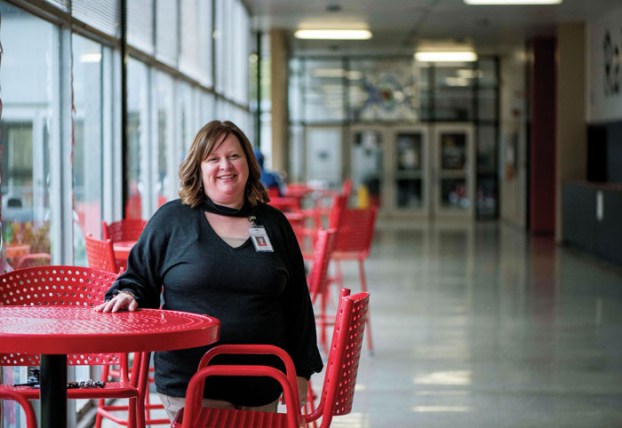 The board came out of a closed session at the beginning of the meeting to make the announcement. Withers made the rounds, shaking hands with the board and hugging colleagues.

Withers, who was recommended by Superintendent Lynn Moody, has served as principal at South Rowan High School since 2014. She began her career with Rowan-Salisbury Schools as a science teacher at West Rowan High School — where she worked from 2000 to 2006.

She became an assistant principal at Carson High School in 2006 and was promoted to principal in 2010 before moving to South Rowan. Withers twice has been named principal of the year for the district.

Moody said there was an extensive interview process by committee for the role, adding that Withers has gained the respect of the administration and her colleagues for being effective for a long period of time. Withers was selected out of 27 applicants for the position, and will start in her new role on June 1.

“If you see what they’re doing at South Rowan, they were one of the first plans to get their renewal plans passed,” Moody said, adding many visitors to the district request to see South Rowan and the renewal transformation there.

Board Chair Kevin Jones said he was impressed with South Rowan when he visited it a few weeks ago and that he has no doubt she is a strong leader after seeing the school.

“We’re excited to have her,” Jones said.

Withers has a doctorate in education from the University of North Carolina Greensboro. She received her master’s from Gardner-Webb University in 2006 and her bachelor’s degree in clinical laboratory science from UNC Chapel Hill in 1997.

While she was principal at Carson, she was behind the school’s iPad Pal sharing model for pairs of teachers, using only school-based funding. She also led development of a night school program, the first in the district, and raised the graduation rate by 9.1% in one year as a result.

While she was teaching at West Rowan and beginning in 2002, she served as a new teacher facilitator for the district. One of her roles as a facilitator included planning staff development sessions for new teachers.

Withers’ promotion comes as Assistant Superintendent for Curriculum Julie Morrow is planning to retire at the end of the school year.

Ask Us: What’s the status of City Park Lake work?

Editor’s note: Ask Us is a weekly feature published online Mondays and in print on Tuesdays. We’ll seek to answer your... read more