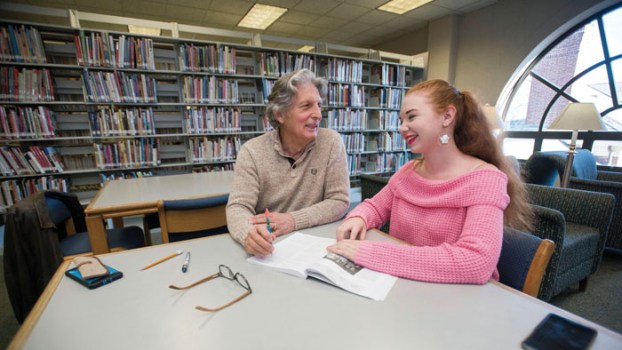 JON C. LAKEY/SALISBURY POST Don Doering, a tutor with the Rowan County Literacy Council, works with Marina Ladigina at the Rowan Public Library. After two years of study, the Ukraine native will head to basic training with the Army and hopes to serve as a linguist or translator.

Compromise always seems tougher when debates are politicized and, as a result, polarizing.

There’s not many better examples than immigration. In a national survey in July by the Pew Research Center, for example, 57% of Republicans or people who lean Republican said the country loses its identity if it’s too open to people from all over the world. That’s a sharp contrast with people who say they’re Democrats or lean Democratic — 86% say America’s openness to people from all over the world is essential to who we are as a nation.

Both numbers are different than the country at large, 62% of which says America’s openness to people from all over the world is essential to who we are as a nation. But increasingly and through self-sorting, Americans find themselves living in something like 57% or 86% communities. Some Rowan Countians live in communities where the percentage is much sharper. It’s part of the reason why compromise is tougher than ever to find on any range of topics and even in casual conversations: people circulate in homogeneous communities — political, racial or otherwise.

What if, instead of automatically retreating to partisan corners, ideas and opinions were informed by personal experiences?

A good way to start broadening your horizons is to volunteer.

Consider the Rowan County Literacy Council, which offers tutors to help legal residents study to become naturalized citizens. That’s in addition to English as a second language, adult basic education and other services.

On Saturday, the Literacy Council held an event at the library with Daniel Knutson, a community relations officer for U.S. Citizenship and Immigration Services. Knutson talked about requirements for becoming a U.S. citizen. He also reminded the good-sized audience that naturalized citizens are usually more informed about the history of the country than those born here. Here are a few other short facts:

• To become a naturalized U.S. citizen, a person must be 18 or older; a permanent resident for a certain amount of time (three or five years depending on how he or she obtained the status); be a person of good moral character (no felony convictions); have a basic knowledge of the country’s government; and, among other things, be able to read, write and speak basic English.

• The time to process an application for citizenship is just a few months in our region, but people are usually in the country for longer than the required time before applying. For the Literacy Council, it’s often 20 years.

• Those with temporary protected status, lawfully in the U.S. as a non-immigrant, do not have a path to citizenship.

• Including a biometric fee, the application is currently $725, and that’s expected to increase to more than $1,000.

And here’s another fact: The Rowan County Literacy Council is in dire need of volunteers. Program Coordinator Laurel Harry said the 17 people in need of a tutor stretches across all of its services, including those studying for citizenship.

The benefits are clear for the student, but tutors would also say it’s a net value for them — helping to learn about the goals and aspirations of our fellow Rowan Countians, whether they are immigrants or not.

Broaden your horizons and inquire about volunteer opportunities about the Rowan County Literacy Council by contacting Harry at lharry@rcliteracy.org or calling the organization’s office at 704-216-8266.

“This is a red letter day in the life of Rowan-Cabarrus Community College. With the help of this historic bond... read more