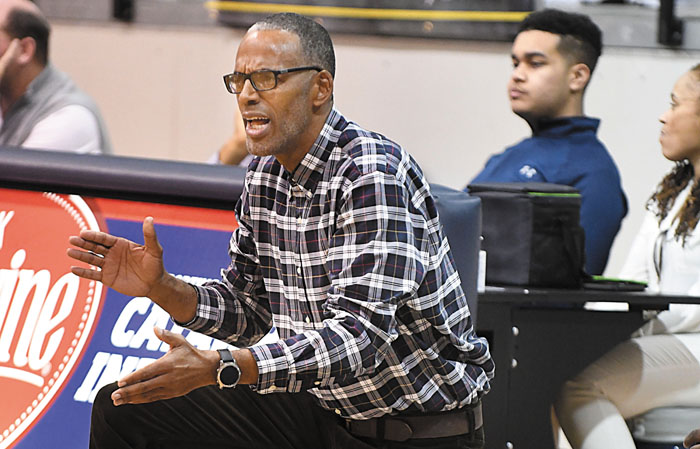 At North Surry High in Mount Airy, the 6-foot-5 Strickland scored 2,000 points and was a prep All-American.

When A.L. Brown and North Surry scrapped at Hickory High School in March 1983, in the NCHSAA’s 3A West Region championship game, it was the biggest basketball contest the Wonders had played in for 15 seasons, their biggest since their epic victory over Kings Mountain in Bullock Gym in the 1968 Western North Carolina High School Activities Association title game.

The player assigned to guard Strickland was Shelwyn Klutz. Both were juniors then. The Wonders had players who were more athletic than Klutz, but none who were tougher or smarter. And it was going to take someone with a level head and no ego to deal with an athlete such as Strickland. The North Surry Greyhound could shoot, and he could practically fly.

“I can remember that North Surry game like it was yesterday,” said Klutz, who resigned recently as AL. Brown’s coach after 23 seasons. “Strickland took off once almost from the foul line and tomahawk-dunked on one of my teammates, and that’s not the kind of thing you ever forget. But I had a pretty good game. I remember we won.”

The Wonders would come up short in the 3A championship game in Greensboro not long after that against a Graham team that shot 58 percent for the game and 65 percent in the second half, but that didn’t diminish the sweet memories of a playoff run that also included a stirring regional semifinal win against East Rutherford.

The 6-4 Klutz stood out in both football (as a quarterback) and basketball for the Wonders. When he graduated in 1984, he had scholarship offers to consider in both sports. North Carolina A&T and Gardner-Webb wanted him for football. Gardner-Webb also recruited him for hoops, as did Wingate and Belmont Abbey. UNC Charlotte came to several of his games, although the 49ers decided to offer another player instead.

“I ultimately chose basketball and chose Mars Hill,” Klutz said. “My brother (Quintin) was a year older and had gone the football route. He advised me to try basketball.”

Basketball meant Klutz’s body would take less of a beating, but there were adjustments to make to college hoops and college life.

“A small town in the mountains was culture shock for me, at first,” Klutz said. “But I grew to love Mars Hill.”

Klutz was a sharp student and had headed to Mars Hill with the intention of majoring in business, but a change of heart gradually occurred.

“My freshman year I was in study hall every night, but my roommates were football players, P.E. majors, and they seemed to have a lot of free time,” Klutz said. “So I made the switch to P.E. after my first year. I never regretted it.”

Klutz probably would have made a good businessman, hard-working and honest, but that P.E. degree from Mars Hill would lead to his true calling — coaching.

He didn’t leave Kannapolis with the intention of returning home someday, but that’s what happened. His first job opportunity after college was at Concord Middle School. It’s safe to say he never wore his Wonder letter jacket to work.

That led to a P.E. job at Woodrow Wilson Elementary School in the northern end of Kannapolis. He loved that and stayed there nine years.

He started coaching at A.L. Brown while he was still working at Woodrow Wilson. He would later move on to A.L. Brown and then to Kannapolis Middle School.

It’s easy to forget that he coached the A.L. Brown varsity girls for five seasons, but he did pretty well. His last two girls teams made the playoffs.

Prior to the 1996-97 season, he shifted over to the A.L. Brown boys, as an assistant to Rick Holt, a star athlete at Salisbury High who had played football at Catawba. When Holt exited for Winston-Salem’s Carver High prior to the 1997-98 season, Klutz was named the Wonders’ head coach.

It was a post he stayed at until last week.

“We’d dig a hole at the start, just about every year,” Klutz said.

That first year, after he finally got his team together, he lost his best rebounder, Nick Gill, to the books. The Wonders went 8-16.

The next season, he lost his most talented player, senior Nick Maddox, for a unique reason. Maddox, who would choose Florida State, was focused on football recruiting trips.

Klutz didn’t experience his first winning season until 2001-02 when the Wonders went 18-8. Even then, the Wonders barely got noticed. They were in the same league with a freight train of a West Rowan squad that was busy winning 61 in a row.

That 2004-05 team provided his only conference championship. With players such as Garrett Sherrill, Ronnie Land, Durrell Miller and Heath Culbertson, the Wonders went 12-2 in the North Piedmont Conference. It was a good league, with strong teams fielded by West Rowan, East Rowan, Statesville, Northwest Cabarrus and Lake Norman, but the Wonders came out on top.

“There were a lot of other years that we were second to great teams,” Klutz said. “Usually West Rowan and Concord, and then later on, Cox Mill. There were years we were close, that we were right there, but we were in a league with one of the best teams in the state. And when you don’t win your league that leads to tough draws, tough road playoff games.”

There were some really difficult years for Klutz when the Wonders headed to the 4A ranks for the 2013-14 season. They’d just graduated a group that could’ve competed in 4A with no problem, but when the Wonders got there, they were overmatched. Klutz’s career numbers took a hit with seasons such as 4-17 and 5-15, but he survived that ordeal, too.

“Those were challenging years because we really didn’t have the talent to compete at that level, but I’m glad that in the past couple of seasons we were able to get the program back up there where it needs to be,” Klutz said.

He went out close to being on top. A.L. Brown won Christmas tournaments in his last two seasons, went 21-8 last season and 18-9 this season. The Wonders beat Cox Mill, one of the best teams in 3A, in his final year.

“I know I was really fortunate to be in one place for so long, and I was especially blessed to do that in my hometown,” Klutz said. “I enjoyed all of it. Even the hard years were a great experience.”

His assistant coaches, especially former South Rowan and Mars Hill star James Allen, who put in 18 seasons as his right-hand man, were loyal through thick and thin. That spoke volumes about Klutz.

He got his 300th win late this season against Robinson and added one more in the South Piedmont Conference Tournament and another in the 3A state playoffs.

“What means a whole lot more to me than the wins was building relationships with the young people of Kannapolis,” Klutz said. “I hope I did a good job with that for 23 years. I hope I helped some of them along the way.”

He says it was an agonizing decision to step down, a choice he made after prayer and family discussion, but at 53, he’s ready for life after basketball. He’s not ready to retire, and he’s looking forward to whatever comes next.

“It was one of the hardest decisions of my life,” Klutz said. “But I know it’s time. It’s time for the program to hear a new voice.”