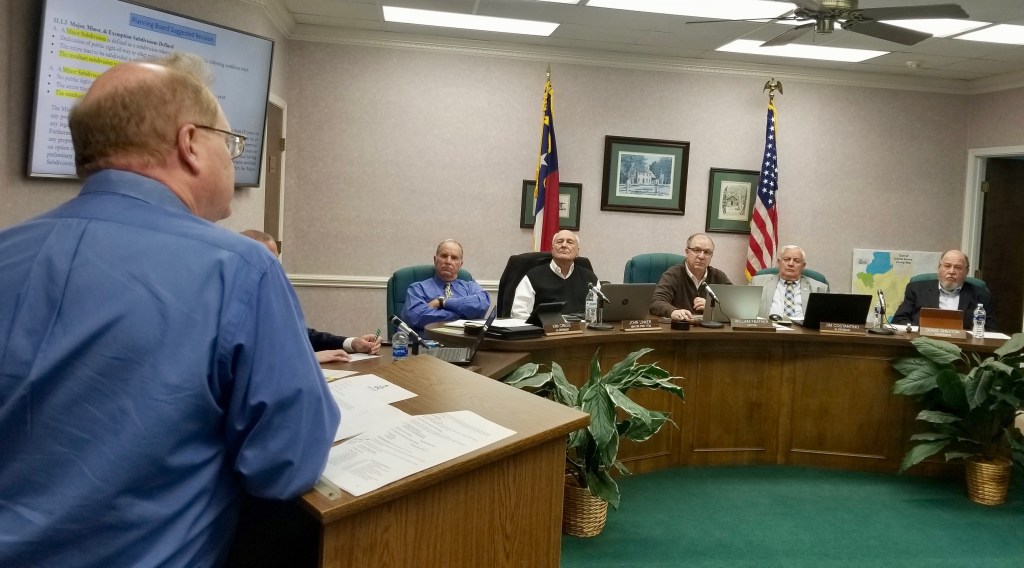 Carl Blankenship/Salisbury Post – Granite Quarry Town Planner Steve Blount, foreground, speaking to the town's Board of Aldermen about a suggested change to the criteria for minor and major subdivisions. The board opted by consensus to have the Planning Board revisit those criteria. Also pictured left to right are alderman Kim Cress, Mayor Pro-Tem John Linkjer, Mayor Bill Feather, aldermen Jim Constantino and Doug Shelton.

GRANITE QUARRY – The board of aldermen agreed Monday the town’s planning board should revisit the criteria for defining subdivisions.

The discussion started after Town Planner Steve Blount brought a suggestion from the planning board to the aldermen that would lower the maximum number of lots for the town’s “minor subdivision” classification from five to three.

All subdivisions have a pre-application process, an application submission and a review. Majors subdivisions require notice for a public hearing and a hearing in front of the planning board before a decision is made.

Another suggestion presented by Blount during his presentation was to post signs at all pending subdivisions, major or minor, and include a phone number residents could call for information. The suggestions were specifically aimed at making residents aware of new subdivisions and providing them with information.

Mayor Bill Feather said a big concern is a lack of input on subdivisions.

“Can we look at our process to see how we can allow more comments from people?” Feather said. “And allow them to at least be heard.”

“It boils down to a set of criteria that you have adopted,” Blount said.

Blount said he can answer questions for concerned neighbors, which would not make everyone happy but diffuse concerns about not knowing what is happening.

“I’m all in favor of having as much citizen input, absolutely as much as we want as many times as we want,” said Mayor Pro-Tem John Linker, adding that the town can not tell a developer “no” based on whether they like a project or not.

Others on the board chimed in to agree with Linker’s remark.

The board set the date for its annual budget workshop on Friday, March 20.