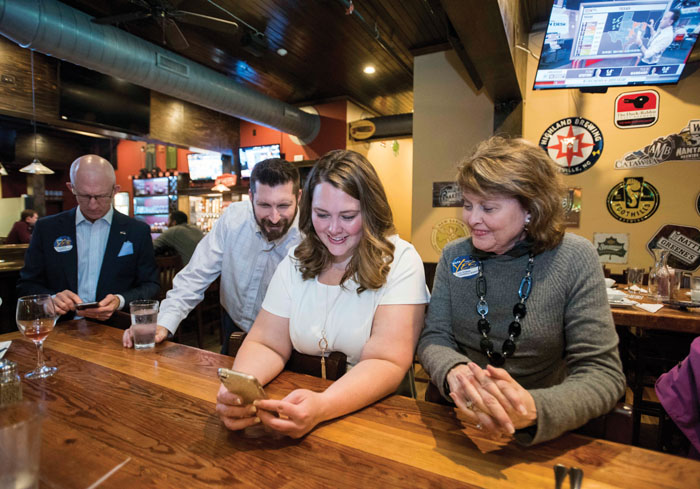 JON C. LAKEY/SALISBURY POST Dusty Saine, Sarah Walker and Dr. Carol Spalding, RCCC President watch the results of the bond referendum come in on the phone. Dr Spalding and members of the leadership team gathered at City Tavern on Tuesday evening to wait out the results of the 45 million bond referendum that was on the ballot along with the candidates running for a place on the ballot in November. Part of the money would go for the Technology Education Complex where trade-based programs like welding would gain much needed space and new equipment. Salisbury,North Carolina,3/3/20.

SALISBURY – Voters on Tuesday said “yes” to a $45 million bond referendum that will provide funding Rowan-Cabarrus Community College needs to expand several of its programs and build a complex of new buildings.

RCCC President Carol Spalding said the college is “thrilled” and will be thanking a lot of people.

Spalding said she is not surprised the referendum passed, adding the community college represents the best investment anybody can make. Spalding said she was disappointed it did not pass by an even wider margin.

The bond issue will pay for a new facility for Rowan County Early College and new automotive, welding and CNC machining space as well as a fire decontamination facility. It is projected to result in a 3-cent property tax increase. The current county property tax is 65.75 cents per $100 of valuation. The debt will be paid over 15 years.

Next, RCCC will be hire an architect, work with county government on the project and navigate the state approval process for the new projects. There is no timeline for the projects, but Spalding said the college wants to get underway as soon as possible.

“I want to say a humble thank you to the voters in Rowan County who had the foresight to pass this important bond referendum. By doing so, they have spoken in favor of economic progress for the county and the chance for themselves, their friends and their neighbors to enjoy a better quality of life and richer opportunities for success,” said RCCC Board of Trustees Chair Chip Short.

Spalding said she couldn’t say enough complimentary things about students who donated time and money to the campaign for the issue. The Student Government Association at RCCC committed 200 service hours and $45,000 to supporting the referendum. That’s despite the fact that existing students will probably not see the results of the bond until after they have graduated.

“We are incredibly grateful for the support of Rowan County voters today. This is a red-letter day in the life of Rowan-Cabarrus Community College,” Spalding said.. “With the passage of this historic bond referendum, we will be able to continue to fulfill our mission to change lives by giving people the opportunity to reach their dreams. My personal appreciation goes out to every single person who contributed to this important step forward.”

If the issue had not passed, Short and Spalding have said the college’s programs would have remained as is, with no improvement. That, Short said, could lead to loss of industries coming to the county.