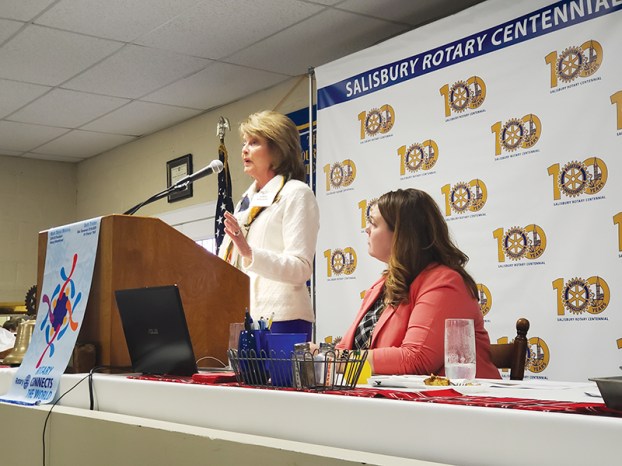 If Rowan-Cabarrus Community College President Carol Spalding and the late Carroll Overton were to have a conversation today about a bond referendum on the March 3 ballot, the pair would find common ground about its benefits.

Today, Spalding makes the case the $45 million bond referendum, which would build a technology education complex, would pay for itself through an expanded ability to train students in programs like welding, robotics, advanced machining and 21st-century automotive programs. Because Rowan-Cabarrus in some cases has more applicants than available seats in its programs, the added capacity will make the community more attractive to prospective employers, Spalding says.

It’s a similar case to what Overton, widely considered the father of the college, said during a March 1961 meeting about another bond referendum.

Then, county leaders were exploring the creation of an industrial education center that would become Rowan Tech before Rowan-Cabarrus Community College. At issue was a $500,000 bond issue ($4.31 million in today’s dollars), to build the industrial education center. Overton, who would preside over the Rowan Tech board for years, was alarmed at the shortage of skilled labor and said such a school would pay for itself if it was influential in bringing even one industry to the community.

Overton was as right then as Spalding is now.

The county cannot grow further if it does not have a workforce to fill the good-paying jobs its leaders hopes to attract. Employers who move here will provide jobs that can be easily automated away as technology improves. Alternatively, businesses will set up shop just inside our borders, taking advantage of lower property prices and taxes.

They’ll also take advantage of better-educated populations from neighboring counties. All but Davidson County has a higher percentage of people 25 and older who have at least some college experience, according to statistics available through the U.S. Census. That means more people who have been through job training programs at community colleges, with two- and four-year degrees and who are desirable to employers of all kinds.

It’s unclear what our county would be today without the industrial education center that eventually became Rowan-Cabarrus Community College or if a similar facility was built later. Countless employers, especially textiles, would not have been as competitive in an economy with borders that were growing. Even if employers were willing to hire people fresh out of high school, those with technical training were better equipped to do the jobs. A welding pipe from a newly minted high schooler, for example, likely did not hold water as well as someone trained in welding from Rowan Technical Institute.

Because of the creation of Rowan Tech, our community was once far ahead of others in training local folks, but it has since fallen behind. We should not attempt to find out what the future looks like without the $45 million bond referendum, which will have a relatively minimal cost compared to its potential benefit.

Welding is just one of several programs at Rowan-Cabarrus that will realize expansion dreams with the bond’s passage, but school officials say there are thousands of open welding jobs in its service area and that the school has just 29 welding stalls. Those stalls have poor ventilation systems that can sometimes require unplanned breaks between work. The bond referendum will provide a total of 70 stalls.

In a time when employers routinely complain it’s hard to find qualified employers, a critical part of the solution must be providing new and expanded space to train local people for jobs that pay well and require a bit more training than what high schools can provide.

Longtime Post reporter and columnist Rose Post’s words in 1962 are as relevant today as they were when describing what would become Rowan Tech: “this industrial education center should close the educational gap in this community.”

By Sharon Randall Do you remember the first time you held the world in the palm of your hand? One... read more