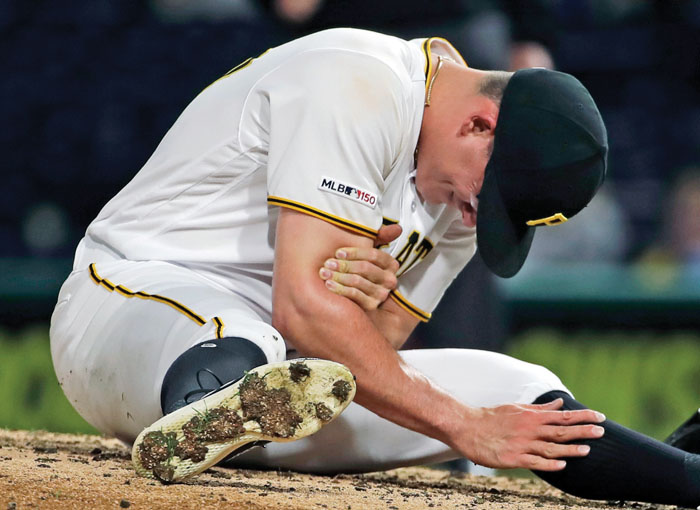 FILE - In this April 22, 2019, file photo, Pittsburgh Pirates relief pitcher Nick Burdi holds his right arm after delivering a pitch during the eighth inning of a baseball game against the Arizona Diamondbacks in Pittsburgh. Burdi is back with the Pirates, one rib lighter and optimistic his issues with thoracic outlet syndrome are behind him. (AP Photo/Gene J. Puskar, File)

BRADENTON, Fla. (AP) — The rib is stashed away somewhere in his parents’ house in suburban Chicago, a reminder of what Pittsburgh Pirates reliever Nick Burdi needed to lose in order to find himself.

The images are ingrained in the 27-year-old’s mind forever, every pitcher’s nightmare come to agonizing life. The hard-throwing right-hander, his big league career finally gaining some traction following a series of fits and starts, slung an 97 mph fastball to Arizona’s Ketel Marte in the top of the eighth at PNC Park last April 23 that Marte took for a ball.

By the time catcher Pirates catcher Elias Díaz stood up to throw the ball back, Burdi was crumpled in a heap on the mound, his pitching arm aflame. Both dugouts fell silent as Burdi clutched his biceps in agony. Burdi had undergone Tommy John surgery in 2017. He knew what it felt like when his elbow went haywire. This was not that, which made it all the more harrowing.

“I had the shooting pain, the throbbing pain in the bicep and elbow area but I didn’t know what it was,” Burdi said this week. “I didn’t know if I had torn something again, if I had ripped something off the bone, whatever it may be.”

Racing from the dugout, director of sports medicine Todd Tomczyk feared Burdi had fractured his arm. Those initial concerns passed. The team ordered Burdi — who made the club out of spring training in 2019 and had chalked up an impressive 17 strikeouts in 8 2/3 innings — to rest. Yet as the weeks passed, the numbness in the pinkie and ring finger of his right hand lingered.

Doctors eventually diagnosed Burdi with the neurogenic version of Thoracic Outlet Syndome, which arises when the nerves between the collarbone and first rib compress. The symptoms — tingling and pain chief among them — were familiar, symptoms Burdi had dismissed for years as the cost of doing business when you throw a baseball triple digits for a living.

In a way, Burdi was relieved. At least he had an answer, though the surgery he underwent last June included the removal of the first rib on his right side, considered necessary to give the nerves room to breathe. Burdi ended up giving the rib to his parents as a present of sorts, joking he might ask for it back after he retires.

Thankfully, that day once again seems far off. Ten months after Burdi’s career flashed in front of his eyes in a quiet ballpark, he stood on the mound at Pirates City on Wednesday and officially hit reset. He faced outfielders Bryan Reynolds, Gregory Polanco and Jarrod Dyson. Reynolds — fourth in Rookie of the Year voting in 2019 — struck out on a check swing. Polanco didn’t make contact. Dyson managed a tapper to the mound. Otherwise, they failed to get a handle on a fastball that touched 98 and a slider that topped out at 90.

Asked if he took a deep breath to drink in the moment his long road back was finally over, the boyish 6-foot-3, 225-pound Burdi shook his head. That moment came last fall when he was cleared to start playing catch. Now he’s too focused on trying to carve out his own spot in what could be a crowded bullpen.

“I’m fighting with 10-15 other guys who are healthy and haven’t had surgery,” Burdi said. “So I can’t really look at it like that.”

Most of those 10-15 other guys, however, don’t have Burdi’s stuff. The Twins were so enamored with him they made him after a record-setting run at Louisville they used a second-round pick on him in 2014. Yet he struggled with consistency and Minnesota left him unprotected in the 2017 Rule 5 Draft six months after he underwent reconstructive elbow surgery.

The Phillies grabbed him and immediately flipped him to Pittsburgh for $500,000 in international bonus pool money. Burdi made two appearances in the majors near the end of 2018 before earning an invitation north last year following an electric spring training in which he fanned 13 batters in 10 innings of work.

As promising as his 2019 started, it all vanished in an instant. Yet Burdi insists he never considered quitting as he eyed his second lengthy rehab in three years.

“I knew what I was getting into,” he said. “I knew that it was going to be a long road again. This is something that baseball is my passion, it’s my livelihood so it’s one of those things where you guys deal with it and move on and get ready for 2020.”

There is guarantee that Burdi is clear of TOS forever. Yet by launching himself off the rubber at Pirates City in the mid-February sun, the heat that pours out of his right arm as vibrant as ever, he took a massive step forward.

“To get over that mental hump is a testament of Nick’s hard work and the organization and all the resources that were poured into him,” Tomczyk said. “It was pretty special to watch.”

Just as special: how good Burdi felt in the aftermath. The post-outing discomfort he knew all too well is gone. Yeah, he could worry about it but what’s the point. It doesn’t hurt. It’s time to deal.

“I’m ready to go back out there,” Burdi said. “All gas from here out.”