‘We’re putting you in an ambulance’: Man rescued after falling 75 feet from I-85 bridge 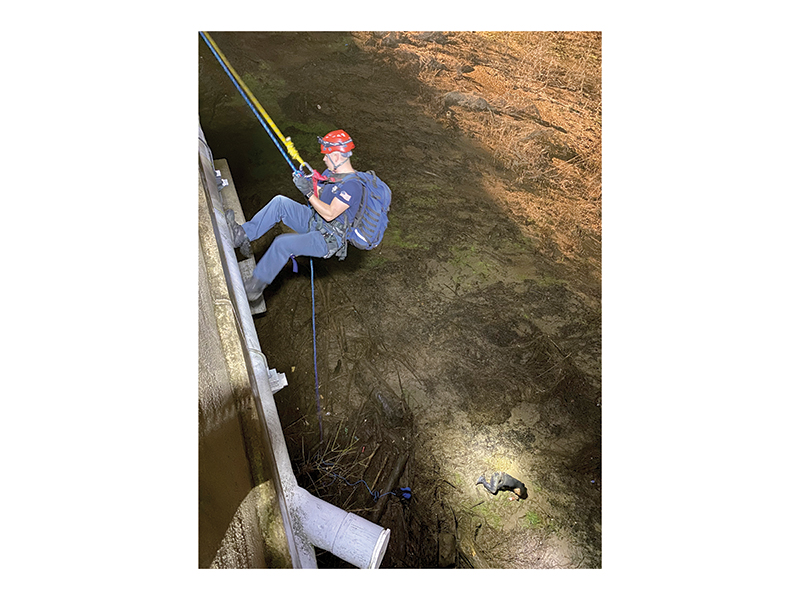 Salisbury Firefighter Jacob Vodochodsky repels down the side of the Yadkin River bridge to rescue Jeremiah Cribbs down below. Cribbs and another FedEx employee pulled over to help a driver who'd been involved in an accident. A tractor trailer driver was traveling close to the shoulder nearly hitting Cribbs. He jumped over the median thinking it was grass below and fell 75 feet into a muddy area. Photo by Salisbury Fire Department

SPENCER — Jeremiah Cribb shouldn’t be alive, his rescuers say, but the 24-year-old Concord man walked away from a 75-foot fall off the Yadkin River bridge after he jumped out of the way of a speeding tractor-trailer on Interstate 85.

Cribb, a driver for FedEx, was headed to Greensboro around 2 a.m. Wednesday when he came upon an automobile accident in the northbound lane. He got out to assist two people who struck a concrete barrier. Cribb also turned on his hazard lights and flagged down a few motorists because the car was sticking out, Cribb said. A fellow FedEx driver also pulled behind Cribb thinking he’d been involved in the accident.

Cribb began directing traffic and helping to get debris out of the road from the collision.

When a tractor-trailer struck the disabled vehicle, Cribb tried to avoid being struck, too, but was seriously injured instead. He jumped over the bridge’s concrete barrier, believing there was a grassy area on the other side.

“When I realized he was going to hit the car, which he did … I just reacted. It’s pitch black dark. I was thinking I was hopping over a median,” Cribb said. “I just started free-falling.”

Cribb said he believes he blacked out upon impact. When he came to, Cribb found his head ringing. He was dizzy and began to check himself for broken bones and paralysis.

“I thought I broke my back. I moved my neck. I moved my legs. I crawled to my phone to call 911 and the police were already there,” Cribb said.

When the fire department rapelled down to him, Cribb said he stood up because it felt better to stand. He was assisted in getting into a harness, pulled over the bridge and was ushered to a waiting ambulance.

Cribb said he thought about the ensuing hospital bill and asked the emergency medical technician if a trip to the hospital was necessary. But the woman said Cribb wasn’t even supposed to be alive. The fall would normally be fatal.

“There’s no question about it we’re putting you in an ambulance,” Cribb recalled the woman saying.

He was taken to Wake Forest Baptist Medical Center — where it was determined he had three fractured ribs and a collapsed lung. Cribb said even he’s amazed he wasn’t more seriously injured.

“I expected 10 times more injuries — 75 feet with no protection, just a body falling on the ground,” he said.

Cribb was able to avoid several large logs under the bridge and tree roots. He landed in thick mud — mud that was “not that soft” he said.

He is expected to remain in the hospital for at least a few more days. On Wednesday afternoon, Cribb contacted the firefighters who rescued him to say thank you.

Salisbury Fire Department Battalion Chief Nick Martin said during a Wednesday news conference that first responders considered rescuing Cribb by boat but deemed it to be too time-intensive. Firefighters instead used a power basket attached to a ladder truck to create a rope system. Responders lowered two rescuers to the bottom to assess Cribb and provide any medical care.

The rescue operation was difficult, Martin said, because it was raining, 3:30 a.m. and on a four-lane, high-speed highway.

“There were a lot of factors there that really add up and add complexity to it. These kinds of events are pretty low frequency but a pretty high-risk event,” Martin said.

Salisbury Firefighter Jacob Vodochodsky was one of the rescuers who rapelled down the bridge. He assessed whether Cribb could move his leg by giving him a pinch and asked for a kick in the hand.

Vodochodsky estimated he spent about 10 minutes with Cribb, checking for a concussion

“He didn’t know what happened,” Vodochodsky said. “He had no clue where he was at. … We shared a couple of personal moments and let him know he was allright. We kept telling him he was doing great and we’d get him out of there.”

“We would not anticipate the outcome from such a fall would be so positive,” Martin said.

Martin said such rescues like Cribb’s “demonstrate the importance of cooperation between neighboring departments and the ability to come together on an incident scene and work together effectively to achieve a good patient outcome.”

“This will be intended to deliver more highly trained and qualified people and equipment to incidents like this. This incident highlights the need for that sort of thing,” Soliz said. “I think this particular incident is just a real testament to the teamwork and cooperation that really is a hallmark of emergency services throughout Rowan County.”

The collision that prompted Cribb to pull over began after a 2003 Lexus driven by Raleigh resident Kourtney Leigh Wagoner was traveling north on I-85, hydroplaned and collided with the shoulder concrete barrier. The vehicle came to rest partially in the roadway in the left shoulder. According to a Highway Patrol report, Wagoner was traveling the posted 70 mph speed limit.

The report does not indicate Wagoner and her passenger, Joseph Cornell Hart II, were injured.