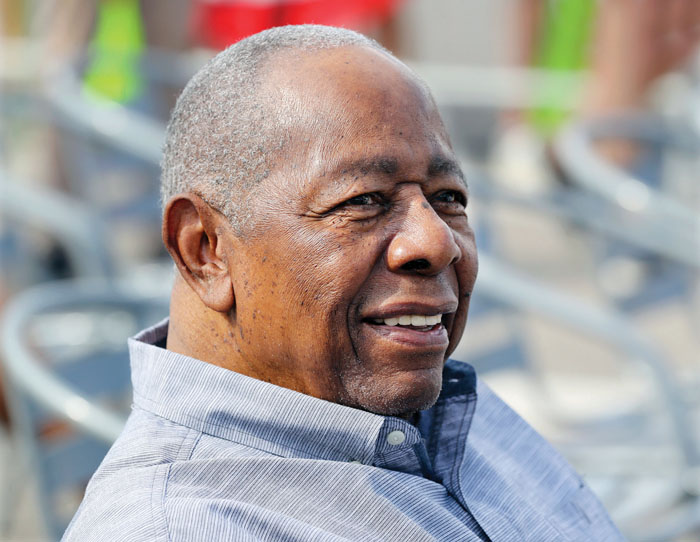 Baseball Hall of Famer Hank Aaron smiles was honored with a street named after him outside CoolToday Park, the spring training baseball facility of the Atlanta Braves, in North Port, Fla., last year. (Curtis Compton/Atlanta Journal-Constitution via AP/File photo)

NORTH PORT, Fla. (AP) — Nothing like a little encouragement from Hammerin’ Hank himself to show the way at spring training for the Atlanta Braves.

The Braves welcomed Hall of Fame slugger Hank Aaron to their first full-squad workout and named a street for him at their new complex Tuesday, starting off a season full of high expectations.

“It’s awesome, we’re so appreciative,” manager Brian Snitker said. “We talked in the winter of him coming down. I told the guys and Hank we’d like to have him around more.”

The two-time NL East champions intend to put some pressure on themselves this year.

That’s all intended to boost a team that went 97-65 last season, but lost to Ozuna and the St. Louis Cardinals in a five-game Division Series.

Atlanta hasn’t won a playoff series since 2001, with one-and-done showings the last nine years it reached the postseason. The Braves last won the World Series in 1995 — before that, it was 1957 when Aaron helped spur a Game 7 victory at Yankee Stadium.

With star first baseman Freddie Freeman proclaiming “World Series or nothing,” the tone is set.

“I kind of feel that way too,” Snitker said. “I felt that way last year.”

“I told the guys, the first box to check off is the division. That’s got to be the goal,” he said.

The Braves are looking for a new starting third baseman and seeking to spread playing time to a surplus of outfielders.

They also are seeking a No. 4 and No. 5 starter while Hamels recuperates in Dallas after experiencing some shoulder discomfort. He’s expected to miss about three weeks of spring training.

The Braves chose not to match the four-year, $92 million contract third baseman Josh Donaldson signed with the Minnesota Twins.

Johan Camargo, who lost 18 pounds in the offseason, and Austin Riley are the top candidates to replace Donaldson.

“It’s an opportunity to win a job,” Riley said. “I have to come out and show what I can do and help this team win.”

Riley said he’s been told he’s going to get more reps at third base and that there has been no talk about outfield work.

“But they also said be ready for anything,” he said.

Adding there’s no tension between he and Camargo, Riley said while they’re competing, their goals are the same.

“We both want to help this team win,” he said. I think there’s a sense of urgency. The guys want and expect to be in the World Series.”

Snitker said he plans on giving both players starts as opposed to one replacing the other during games.

“It’s tough, outfield is hard,” Snitker said. “We’re going to need to use all of the Grapefruit League.”

At 36, Markakis is a major league veteran of 14 years. He said he feels like he’s 21 and still has the same hunger.

“I’m up for the challenge,” he said. “I’m excited. I’m here to help the team any way I can. I’ve always had competitive juices, I don’t need much motivation.”

Ozuna said going from beating the Braves to joining them is “a little weird. Now we are family.”

NOTES: Snitker said he talked to former Braves manager Bobby Cox this week but doesn’t expect him to make it to spring training. Cox suffered a stroke last April. “It’s tough for me not having him around,” Snitker said.