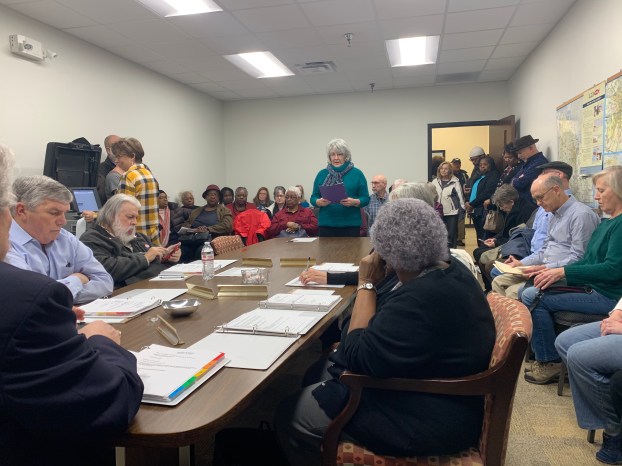 Pam Bloom addressed the Elections board at their meeting Tuesday afternoon. She told the board voting should be as "accessible as possible to as many citizens as possible" and asked for them to consider adding Sunday as an early voting day.

SALISBURY — The Rowan County Board of Elections meeting room was filled Tuesday afternoon with a question for members: Would they consider adding Sunday as an early voting day in the November general election?

Fifteen citizens told the board they wanted to add a Sunday voting discussion to the next meeting’s agenda. Because primary voting is underway, the board decided to add it to the March 3 Election Day meeting at 7 p.m., as the members are waiting on returns. Sunday early voting would not take effect in time for the primary election.

The board would need to decide before budget requests go to county commissioners on March 13.

Advocates for Sunday voting spoke of limited opportunities for some who work several jobs and have other responsibilities that prevent them from being able to vote.

“It is impossible for many many people to make it to voting,” said Kim Porter. “If I’m privileged, I can make it. If I work an hourly job or happen to work six out of the seven days a week, then I can’t carry this little sign away that says I voted.”

Porter held up his “I voted” sticker and said he was able to come to “speak for those who have difficulty speaking because it costs them too much not to be here.”

Carol Pomeroy said everyone has the right to vote and that Sunday is the only day that works for some people.

Keith Townsend spoke about a Salisbury Post editorial from August 2016 (“Time to invest in democracy”) The scene in 2016 was similar to the one at the Board of Elections on Tuesday. Citizens were asking for a Sunday early voting day and Livingstone College to be an early voting location. Commissioners then denied the expansion citing money concerns. The editorial, though, said commissioner approved hangars at the then-Rowan County Airport and signs on Interstate 85.

“Money was not an issue,” Townsend said. “The government has money for what they want to have money for.”

Townsend said the Rowan County Board of Elections can’t make people vote, even if it sent a limousine to transport them, but the county shouldn’t put obstacles in people’s way.

He said the Board of Elections was the most important board in local government.

“This is more important than the Board of Education,” said Townsend, a former teacher. “Our democracy right now is on life support and the vote in any democracy is at the heart of the system.”

Nan Lund said people who are not voting include those of low income, lower education, working two or three jobs and struggling with childcare. Those groups are being disenfranchised, she said.

“The whole system really works against the working poor and the less educated who need to have their voices heard,” Lund said.

Pastor Roy Dennis said he wants everyone to be free and have the ability to vote, no matter their party.

“We need to have everyone — I don’t care what party you are — you should come out and cast your vote,” Dennis said. “We shouldn’t have anyone suppressing people, saying I don’t want you to vote.”

Elaine Hewitt was the lone voice not in favor of expanding early voting to Sunday. She asked the board to be rational and not emotional when discussing adding the day.

Michael Stringer offered the board a solution to the financial challenges of adding a day: cut back one with low turnout.

Board of Elections Member George W. Benson said he liked the idea of taking a day out of the week that was not “so heavily used.” It could offset any costs.

Elections Director Brenda McCubbins said cutting back could be an option if the day is not state-mandated.

McCubbins said the board should also discuss the number of early voting sites for the general election. In 2016, the county had five early voting sites. For the current primary election, Rowan County has three.