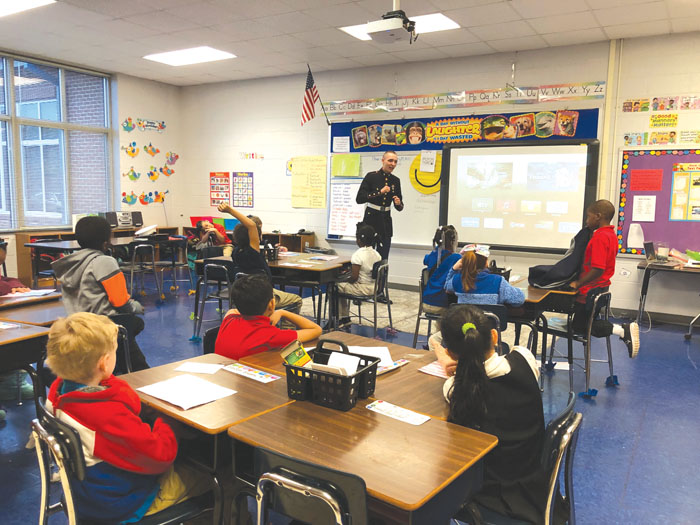 Natalie Anderson/Salisbury Post — U.S. Marine Corps Private Caleb Williams visited Wendy Overcash's second grade class at Hanford-Dole Elementary on Feb. 13 to thank them for the poster-sized card they made and sent to him during his time at boot camp. Williams also talked to the class about what it was like to be a Marine. His sister, Macy, is in the class.

SALISBURY — A second grade class at Hanford-Dole Elementary on Thursday visited with and officially “sent off” a student’s brother, Pvt. Caleb Williams, who just graduated from U.S. Marine Corps bootcamp.

Macy Hall and her class, taught by Wendy Overcash, made a poster-sized card for Williams and sent it to him while he was in bootcamp. Williams, who didn’t expect such a big card, said it was “a good reset” while he was going through basic training. He added that the rest of his platoon thought it was cool and it served as a reminder that “he can do it.”

He visited the class to express his gratitude and talk about his experience in the Marines. Students held up American flag coloring sheets while listening to the Armed Forces Medley before reciting the pledge of allegiance.

Williams then answered questions from the students. The discussion ranged from what exercises he had to perform in boot camp to what the requirements were to be a marine. He responded that Marines must first and foremost uphold “honor, courage and commitment.”

He also explained the Marine Corps’ motto of “semper fidelis,” which is Latin for “always faithful.” He told students he had to yell the motto at the top of his lungs many times in basic training.

Students were amused when he explained the different suits Marines wear, particularly the “pickle suit,” which is the nickname given to the service alpha uniform due to its green color.

Williams is an E-1 private and has a job in security forces. He’s at home visiting until March 10 before heading to Camp Lejeune in Jacksonville for 59 days of in-the-field training.

Sandra Shuping, Williams’ “Maw” and the one who raised him, made a scrapbook for the new Marine that began with a picture of him wearing military camoflouge when he was young and ended with his Marine Corps portrait. She was with the class when Williams made his visit.

And when Williams asked which students wanted to go to boot camp, many hands were raised. One student even said he had a pair of boots just like Williams’ in his backpack.