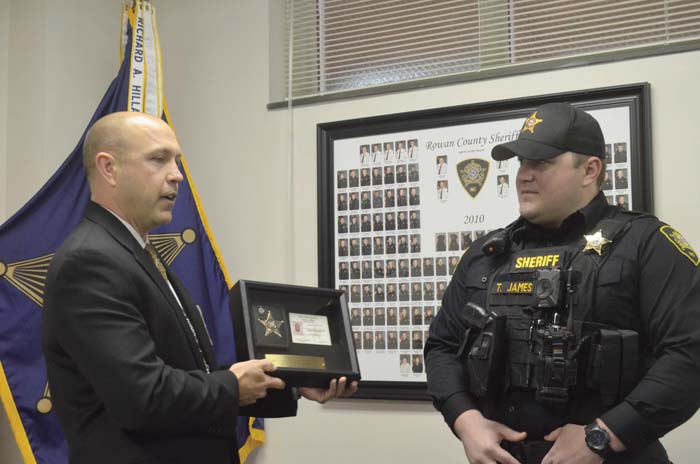 Sgt. J.L. Clayton with the Wake County Sheriff's Office, left, presents Rowan County Sheriff's deputy Travis James with a badge and placard that belonged to James' father, Franklin, who died in the line of duty in 2003. Clayton and Franklin James were partners. Clayton recently was given the badge and wanted to present it to Travis James. Shavonne Walker/Salisbury Post

SALISBURY — Rowan County Sheriff’s Deputy Travis James had no idea what he’d done to get called into his supervisor’s office but waiting for him on Wednesday morning was a gift that had been unseen for nearly 16 years.

The patrol officer was part of a deliberate ruse that ended with him receiving his late father’s law enforcement badge and identification card. The card and other items were placed in a shadow box and given to James by his father’s former patrol partner, Sgt. Justin Clayton.

His father, Wake County sheriff’s deputy Franklin James, was on his way to a domestic call on Sept. 5, 2003, when he was involved in an automobile accident. His father, 33 at the time, died at the hospital a short time later. Travis James was barely a teenager when his father died in the line of duty.

The Wake County Sheriff’s Office property custodian recently retired, and the new custodian found his father’s wallet badge. It had been sitting in evidence since the night of the accident.

The wallet also contained a tie tack pin that belonged to Frank James. Clayton joked that while other officers at the time were only allowed one tie tack pin, somehow, Frank James managed to secure two.

The two men would eat breakfast every morning at a restaurant and, when Frank paid for his breakfast, Clayton would see that tie tack pin.

“I bet you ain’t got one of them, do you?” Clayton said, quoting his former partner.

Clayton and the younger James had reconnected via Facebook and talked on occasion. Once James was settled in at the Rowan County Sheriff’s Office, Clayton made contact with the law enforcement agency and set things in motion with James’ sergeant and lieutenant.

“Today I wanted to do something to honor your father,” Clayton told James.

“It’s a major honor for me to know that he (his father) made Wake County proud. He did good and I have the opportunity to be here in Rowan County and hopefully make them proud as well,” Travis said.

He had a belt clip badge, but never knew about the other items.

“I will always have Frank in my heart for the times we spent out there on patrol together when this was brought to me, immediately, I knew this was something that I needed to get to his son,” Clayton said.

“It’s a huge surprise. It’s amazing and I really appreciate it,” James said of the gift.

Amid applause from James’ fellow officers, command staff and his wife, he said he thought he was in trouble when called into his supervisor’s office. After seeing his father’s former partner, he was still confused and shocked.

“That’s really cool,” Travis said as he looked down at the box.

“Frank James made the ultimate sacrifice that night helping others and it was an honor to work with him and beside him,” Clayton said.

Every year, Frank James is also remembered during a memorial at the Wake County Sheriff’s Office.