Wake Forest beats UNC for 1st win in series since 2014 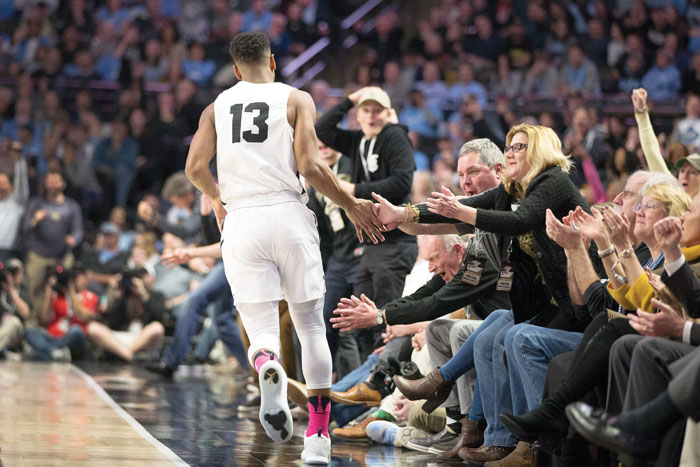 By AARON BEARD AP Basketball Writer
WINSTON-SALEM (AP) — Both Wake Forest and North Carolina entered Tuesday night’s game trying to fix problems that had led to a growing list of losses, including one each on last-second baskets over the weekend.
Only the Demon Deacons played with an attentiveness to detail, and maybe a little desperation, to earn a win.
Andrien White scored 15 points to help Wake Forest beat cold-shooting UNC 74-57, earning its first win against the Tar Heels in six years.
The Demon Deacons (11-13, 4-10 Atlantic Coast Conference) shot nearly 56% in an opening half to lead by 18 by the break. A flurry out of halftime gave them their biggest lead at 26 points against a UNC team that struggled badly in its first game after Saturday’s wild overtime loss to rival Duke.
White described his team as “desperate” after losses at No. 5 Louisville and Syracuse. Teammate Brandon Childress sensed the same.
“Yeah, from practice the moment we got back from Syracuse to now,” Childress said. “Our preparation was the reason why we won today.”
Compare that to comments from UNC freshman Cole Anthony.
“We didn’t listen to the scouting report,” Anthony said. “There was a few plays where we just, like stuff the coaches told us, we just didn’t pay attention, didn’t follow through on that.”
Coach Roy Williams had a quick example. The scouting report said that the Tar Heels should make White put the ball on the floor, only to see him hit three first-half 3s.
“Someway, somehow I’ve got to get the guys to do a better job of what I ask them to do,” Williams said. “They’ve got to do a better job with little things. And then I think we’d have a better chance. ”
North Carolina (10-14, 3-10) turned in a performance that at one point had Williams angrily slamming a clipboard to the court during a timeout. The Tar Heels shot just 33% and made 1 of 16 3-pointers, hindering comeback efforts even after Wake Forest cooled.
They got within 66-57 on Anthony’s free throws with 2:37 left and had a chance to draw closer, but Christian Keeling hit the front iron on a 3-point attempt near the 2-minute mark in their last best chance.
Anthony had 15 points on 5-for-19 shooting for the Tar Heels. Keeling a graduate transfer from Charleston Southern, also had 15 for a season high.
BIG PICTURE
UNC: The Tar Heels had a rough follow-up to the crushing loss to the Blue Devils on Saturday, when they blew a 13-point lead in the final 4 1/2 minutes of regulation and saw Duke hit buzzer-beating shots both to force overtime and then to win it. This time, playing again without injured No. 3 scorer Brandon Robinson, they never led on their way to a fourth straight loss.
Wake Forest: In the past week, the Demon Deacons had squandered a 12-point halftime lead in the loss to the Cardinals then rallied from 16 down against the Orange only to lose on a last-second shot. But they got rolling quickly to end a six-game skid in the series, earning their first win against the Tar Heels since January 2014 — which was the season before coach Danny Manning’s arrival.
“I thought the momentum that we created in the first half gave us a lot of energy and a lot of juice going into halftime,” Manning said.
BROOKS’ BATTLE
Junior forward Garrison Brooks, UNC’s No. 2 scorer, managed seven points while missing all five of his shots and never looked comfortable while wearing protective goggles due to a scratched cornea that Williams said is affecting Brooks’ vision.
He also left briefly after taking an inadvertent blow to the face from Ody Oguama with 3:02 left before halftime, returning for the second half after receiving two stitches to his upper lip.
The good news, at least, was that Brooks made 7 of 8 free throws after missing 15 of 16 since halftime of UNC’s win at North Carolina State on Jan. 27.
“I was proud of Garrison and not proud of myself and anybody else,” Williams said.
UP NEXT
UNC: The Tar Heels host reigning national champion Virginia on Saturday night.
Wake Forest: The Demon Deacons visit Miami on Saturday.
___
More AP college basketball: http://apnews.com/Collegebasketball and http://www.twitter.com/AP_Top25
___
Follow Aaron Beard on Twitter at http://www.twitter.com/aaronbeardap