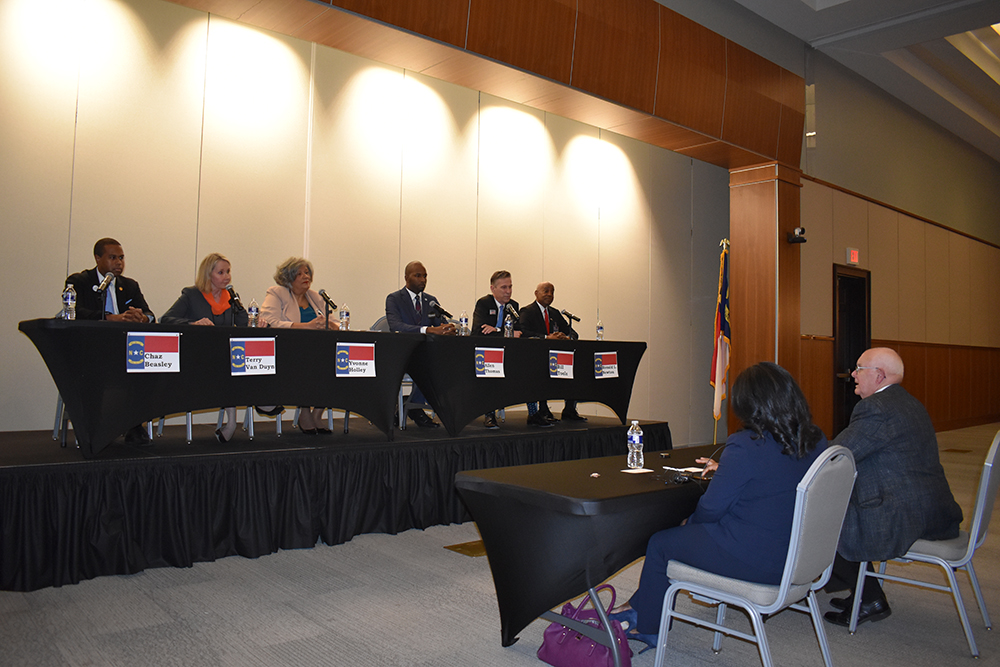 KANNAPOLIS — In a crowded lieutenant governor race, Democratic candidates shared their platforms Sunday during a debate hosted by the Cabarrus County Democratic Party.

Campbell asked a question to the candidates from Bev Purdue, a former governor and lieutenant governor, that many who enter into the position realize the little power it has, except for sitting on boards and “waiting for the governor to die.” How will the candidates earn the salary?

State Rep. Chaz Beasley, D-92, said he sees the power on the State Board of Education and the community college board to be “tremendous.” If the Senate becomes evenly divided between Democrats and Republicans, which he expects, he could have the last say on bills.

“It is a real problem that we have people who think of this role through its limitations and not through its possibilities,” Beasley said. “I don’t understand why anyone who wants to run for a position and look at it as the minute they start they are already powerless.”

Holley said she has a lifelong experience in the community — from grassroots to the board room.

“I have been po’ — not poor, but po’,” she said. “I have been middle class. I’ve been a single mom. I understand the struggles.”

Newton, who ran for the position in 2016, said he knows the issues that matter to North Carolina because he has traveled across the state four times since 2009.

“I don’t talk about issues from what I see in the newspaper. What I deal with is what I find in those communities,” Newton said. “Two things exist: all politics are local and I will represent the people.”

His goals are to expand Medicaid and forgo privatized prisons.

Thomas, a Hoke County commissioner, called himself a pitbull and ready to fight. Thomas said he grew up in one of the poorest counties in North Carolina. His parents couldn’t afford $1.60 for lunch money. His father is serving a life sentence for killing his mother. He was left parentless at 21.

“When you look into someone’s eyes, they’re reciting a platform or just saying something that they rehearsed or memorized,” Thomas said. “Or are they talking about creating a world that would not allow you to go through the pains that they went through?”

Toole, a former Belmont councilman and environmental lawyer, said the state is dysfunctional because leadership cannot work things out that are common to the people.

“I really appreciate the vision Roy Cooper for North Carolina and I want to help him have the most successful second term possible,” Van Duyn said. “He talks all the time about his priorities that we be a better educated state, a healthier state and we have more money in our pockets. I’m going to be his voice.”