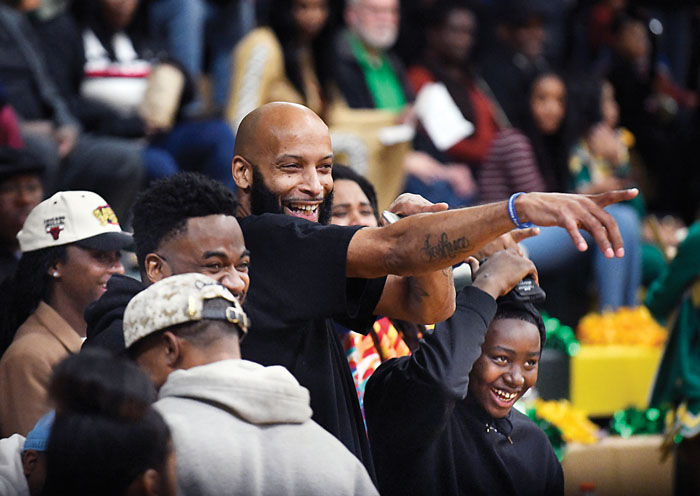 Wayne Hinshaw/for the Salisbury Post ... Quincy Hall, who starred for West Rowan in the 1990s, cheers on his son, Josh, during Moravian Prep’s game last night at North Rowan. Josh Hall, a highly recruited 6-9 guard, has committed to N.C. State.

SPENCER — So that’s what all the fuss was about.

The state’s third-ranked team, Moravian Prep, brought its traveling circus to North Rowan Saturday night and turned the game into a high-powered dunk-a-thon — jamming 11 times and scoring the game’s first 26 points in a 79-29 victory.

“You play a game like this for a lot of reasons,” said North coach Jason Causby. “What we wanted to do was throw our kids to the wolves, basically, to get them ready for the state playoffs. And that was evident in the first quarter — all those early turnovers — and that was obviously the story of the game.”

There were a number of intriguing subplots, including an impossible-to-ignore performance by 6-foot-9 forward Josh Hall. The N.C. State commit contributed 12 points, five rebounds and four assists in about half the game.

“It’s like a homecoming for me,” said Hall, whose father, Quincy Hall, starred for West Rowan in the early 1990s. His grandfather, Clint, was also impressive for West in the early 1970s. “It was nice to come in here and put on a show, electrifying the crowd. But it’s pretty much like that every night for us.”

The rest of the Moravian Prep cast looked like the front row at the Oscars. There was backcourt wizard Shakeel Moore, another N.C. State recruit and the team’s shortest player at six-foot. He spent the night weaving through traffic like Gale Sayers running for daylight, topped all scorers with 15 points and dunked four times against North’s backpedaling defense.

“I wasn’t used to playing a team with so much speed,” said 6-10 Cavs’ sophomore Brandon White. “I had to change the way I defended.”

Another handful was Moravian Prep forward Javarzia Belton, a 6-10 man-child who provided 11 points and five rebounds in limited action. He’s being recruited by 15 Division I programs, as is teammate Jahamri Harvey, a 6-5 shooting guard.

“They showed us what Division I athletes look like,” said North junior Zay Davis. “We’re a good team, but there are some exceptional athletes out there. This was a chance for us to look in the mirror and say, ‘that’s what we want to be.’ But win, lose or draw, we gave our all and fought them to the end. That showed heart.”

That sentiment was echoed by Moravian Prep coach Antonio Lowe.

“We didn’t get the chance to tell the kids and the coaching staff for North Rowan, but we really appreciate them playing us,” he said. “It’s been tough this year. We’ve had a lot of people not want to play us. For a team like them — they were outmanned, outmatched, a 1A school — to take the game and want to play us, that means a lot. It says a lot about the program here at North Rowan. Hats off to them for having the heart to play us.”

Causby and the Cavs seemed to embrace the matchup with a nothing-to-lose mentality. They managed only nine field goals, but played with a fierceness that should benefit them in the upcoming YVC tournament.

“And that’s the most important thing,” said North forward Brandon Jefferson. “They did us a favor. They helped get us ready our next step. Honestly, these kids were out of our league, but they prepared us for the state playoffs.”

Of course, Moravian Prep remains a national powerhouse. The Lions used an offense inspired by Cirque du Soleil to burry North in the opening six minutes — when three players scored on acrobatic, fast-break jams, another on a crowd-pleasing alley-oop play and a third on an intentional pass off the backboard to a trailer.

“Now we have a great idea what Division I players look like,” said Causby, who was clearly impressed with North’s second-half effort. “The fact that we didn’t back down, that made me really proud of my guys. I thought Quashawn Carpenter grew up tonight and Zay Davis did what he always does for us. Down 26-0, I wondered if we were ever actually going to play — or were we going to run away and hide. But we responded. They weren’t embarrassed. They weren’t worried about what people were thinking. They kept playing — and playing with heart.”

Jefferson blocked a couple of first-quarter shots and finished with eight points. White had a team-high 10, including a two-handed dunk in the third quarter and a second off a fourth-period inbounds pass.

When it was over, while Hall signed autographs and posed for pictures with young spectators, Causby huddled the Cavs in their locker room and delivered a simple message: Sometimes you win and sometimes you learn.

“I told them if they play that hard against the rest of our opponents, there’s no reason why we can’t be in every game,” he concluded. “We have a chance to win every game. That’s what I want them to see.”

NOTES: North (15-7) had 12 turnovers in the first quarter and had its four-game winning streak snapped. It hosts Elevation Prep Academy on Monday and closes its conference season Tuesday at home against South Davidson. … Moravian Prep (26-2) is located in Hudson, N.C., near Hickory. … A running clock was triggered just 18 seconds into the second half when Hall’s three-point play gave the guests a 54-14 lead. … Former North Rowan football star Tony Morgan was one of the game’s three officials.