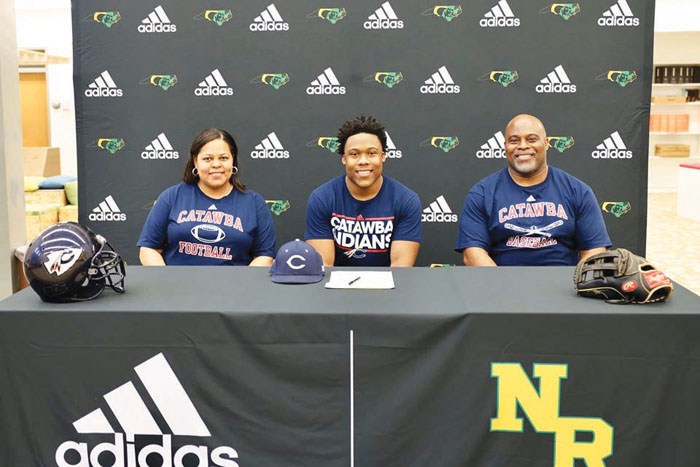 Facebook photo ... North Rowan's Jordan Goodine, center, has signed with Catawba to play football and baseball. He is shown with parents Bridgette (left) and Rodney Goodine. Rodney Goodine played football at Catawba and is in the school's Hall of Fame.

SPENCER —  Friday’s signing party at North Rowan was unusual right from the start.

North senior Jordan Goodine was flanked by his father (Rodney), who wore a Catawba College baseball T-shirt, and his mother (Bridgette), who was decked out in Catawba football gear.

Jordan, who wore a generic blue Catawba shirt that didn’t declare his preference one way or the other, is a special two-sport athlete. As hard as it is to do it, he’s got a chance to play baseball and football for the Division II Indians. He loves both sports equally, and he’s going to take his best shot.

“Growing up, it was always baseball for me, so I always thought  I would play baseball in college,” Goodine said. “But then, I had a really good football game against Carson as a sophomore, and I started thinking maybe I could play football in college.”

In college, you miss fall baseball workouts and scrimmages, while you’re playing football. You miss spring football while you’re busy with baseball. But if anyone can be successful at balancing the two sports, it’s Goodine.

In football, he’s a linebacker. In baseball, he’s a right-handed hitting outfielder with power and speed, but he’s also a left-handed thrower with mound potential.

“His drive makes him stand out and he’s always pushed the envelope as far as his intensity,” North head football coach Ben Hampton said. “He has leadership skills second to none. He’s put in the work and he’s earned everything that he’s getting. There’s not a more deserving kid  anywhere. Now he’s going to be coached by Jim Gantt (baseball) and Curtis Walker (football), masters of their craft. It’s going to be interesting to see where he develops more.”

Jordan’s family history is well-known. Rodney Goodine came from Seneca, S.C., and became one of the dominant linebackers in Catawba history. He made the No. 55 jersey feared and produced 392 tackles. He was a first team All-America pick in 1988 and 1989 (when one of his teammates was Walker). He became a Catawba Sports Hall of Famer in 2007.

He’s been part of North’s football staff for years and served as defensive coordinator this past season.

“Jordan was coached in high school by his dad and now he’s got a chance to follow in the footsteps of his All-American dad at Catawba,” Hampton said. “What can be a better story than that?”

Goodine made 51 tackles as a varsity sophomore in 2017.  He got serious about excelling in football in the offseason between his sophomore and junior seasons. He set goals and became a workout fanatic. He transformed his body, getting leaner, faster and stronger. As a junior, he doubled his tackles total. As a senior, he was pretty incredible. He had 173 tackles, with 34 for loss. He was 1A Yadkin Valley Conference Defensive Player of the Year.

On the menu at Friday’s signing party, along with hot dogs and chips, were Nestlé Crunch bars. That was appropriate.

“Jordan is a physical specimen now, freakishly strong for 6 feet and 210 pounds,” Hampton said. “He can bench, squat and clean the weight room.”

In baseball, Goodine was all-county second team as a freshman and first team as a sophomore and junior. He plays in a 1A high school league, so there was skepticism about how good he really was until the Rowan County American Legion season last summer. In his Legion debut, he led Rowan in runs scored and steals, drove in 28 runs and proved to be one of the team’s top players.

North head baseball coach Patrick Hampton plans to use Goodine as an outfielder/closer this season.

“Jordan’s ability is exceptional, and he’s got unusual passion for the game,” Patrick Hampton said. “In modern society, you don’t that see that kind of passion much any more.”

Goodine made up his mind about Catawba last month. It was on the night of Jan. 10. He and his parents were talking about his options. He had baseball offers and football offers, but he still was waiting around to see if Tusculum, which wanted him for baseball, also was going to make a football offer.

That’s the night he decided to stop delaying and committed to the Indians.

“Since I was 2 years old, my room has been decorated with Catawba stuff,” Goodine said. “I guess I was destined to go there all along.”

For someone who just turned 18 in late January, Goodine is extra mature. He has a life plan in place once his playing days are over.

He’s going to major in administration of justice (criminal justice) at Catawba. His long-term goal is to join United States Air Force security.

“He’s an aggressive young man who plays football a lot like his dad did,” Walker said. “He’s athletic and he’s disciplined. You can’t become as good in two sports as he is without discipline.”