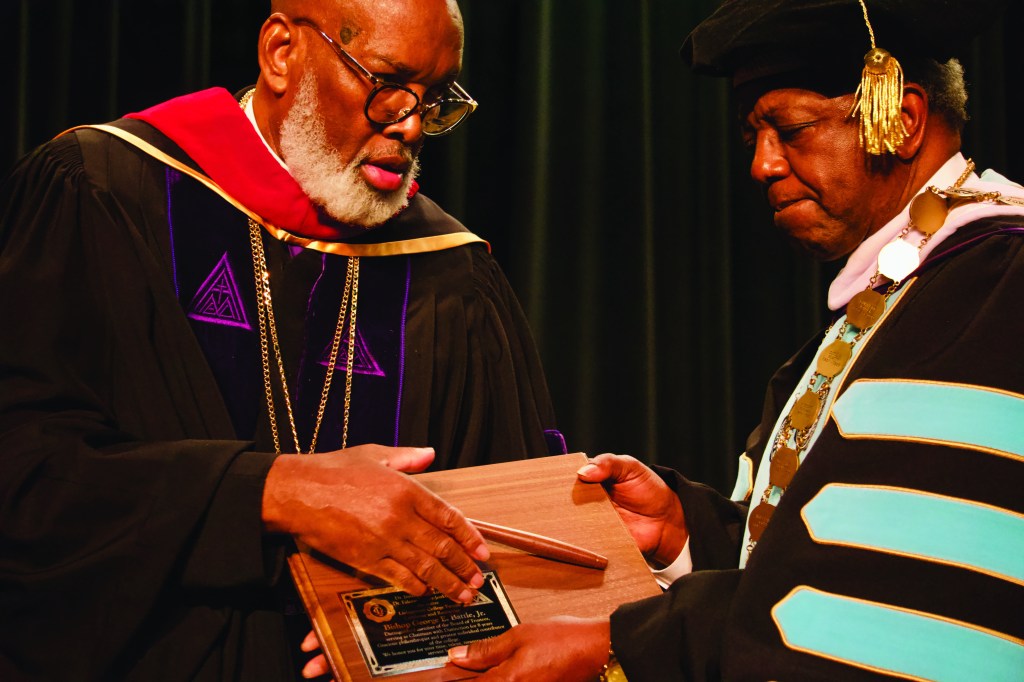 Battle, the former chairman of the Charlotte-Mecklenburg Schools and the outgoing chairman of the Livingstone Board of Trustees, is the single largest contributor in the college’s history. Despite health struggles, Battle managed to raise $750,000 for the college in the previous year alone.

When he began his journey away from his native Rocky Mount, Battle said, he left home with $50 and a paper bag, adding he could have left what he had in the bag at home.

Battle’s son, George Battle III, spoke briefly about his father with his family on stage

“My dad is truly my hero,” the younger Battle said.

Rev. David Williams delivered the Founder’s Day address, speaking to the assembled students about opportunities and taking chances, telling them someone saw their potential and took a chance on them.

Williams dove into a fiery sermon and ended his address by telling the audience, “Take your next chance like it’s your last chance.”

Wiliams, a Kinston native, is an alumnus of East Carolina University and Hood Theological Seminary. He is pursuing a doctorate of education and leadership with curriculum instruction from the University of Phoenix.

Hunder founded the Liberian Organization of the Piedmont and is the chair of its board of directors. The nonprofit has a number of collaborative and humanitarian efforts between the Piedmont and the African nation Liberia. Among his achievements are creating the African American Educational Queen Pageant, installing a historic marker on Liberia Street in Winston-Salem and facilitating scholarships.

Hunder immigrated to the U.S. in 1985 and previously served as a presidential bodyguard in Liberia.

Contributions of $250,000 and $500,000 from Blue Cross Blue Shield and Bank of America, respectively, to the college also were recognized Thursday.

The event transitioned to a memorial ceremony for Price, which would typically be held at the college’s mausoleum, but was also held in Varick Auditorium due to the weather.