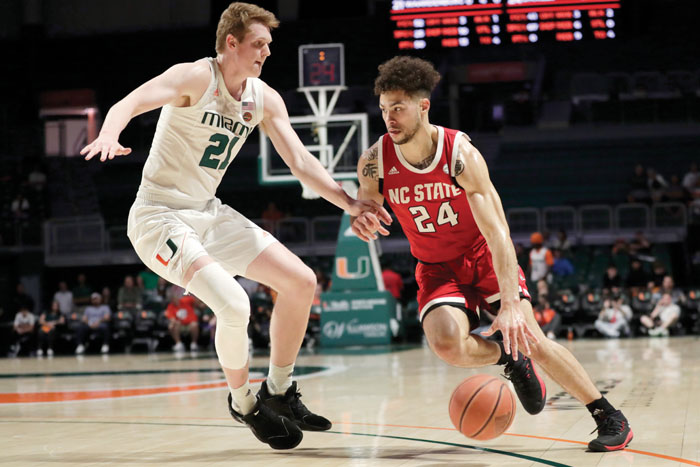 CORAL GABLES, Fla. (AP) — C.J. Bryce scored 22 points and grabbed 11 rebounds to lead N.C. State to an 83-72 victory over Miami on Wednesday night.
N.C. State, which snapped a three-game losing streak, built an 18-point lead early in the second half before Miami rallied with a 16-2 run and twice trimmed its deficit to three points.
Markell Johnson finished with 19 points and 12 assists, while Devon Daniels and Braxton Beverly scored 14 points each for the Wolfpack (15-8, 6-6 Atlantic Coast Conference).
Isaiah Wong’s two free throws with 4:33 remaining reduced the deficit to 71-68 before Bryce made a layup and Manny Bates threw down a dunk and it was at least a two-possession game the rest of the way.
N.C. State took the lead for good following a 12-0 spurt midway through the first half. Daniels’ layup with 4:55 remaining capped the surge and gave the Wolfpack a 33-24 lead.
Harlond Beverly scored 20 points and Dejan Vasiljevic added 18 for Miami (11-11, 3-9), which played its fourth consecutive game without leading scorer Chris Lykes. The junior guard, who is averaging 15.7 points per game, is sidelined because of a groin injury.
The Wolfpack used a 9-0 run to build a 44-30 lead with 51 remaining in the first half. Bryce was fouled by Sam Waardenburg and converted two free throws. Technical fouls on Waardenburg and the Miami bench resulted in additional free throws from Bryce and Johnson.
BIG PICTURE:
North Carolina State: The Wolfpack shot 50% from the field and overcame a recent shooting slump. Entering Wednesday, N.C. State had shot 38.7% in its last seven games.
Miami: The road has not been pleasant for the Hurricanes during their first six conference games. Miami is 1-5 in a road schedule that has included losses at then-No. 8 Duke and then-No. 13 Louisville. An upcoming stretch with four of six games away from Watsco Center will determine if the Hurricanes can improve their post-season aspirations.
UP NEXT:
N.C. State plays the second of its three-game road trip at Syracuse on Tuesday.
Miami concludes its regular-season series with No. 8 Florida State on Saturday in Tallahassee. In the previous matchup, on Jan. 18, the visiting Seminoles rallied from a nine-point second-half deficit and defeated Miami 83-79 in overtime.
___
More AP college basketball: https://apnews.com/Collegebasketball and https://twitter.com/AP_Top25