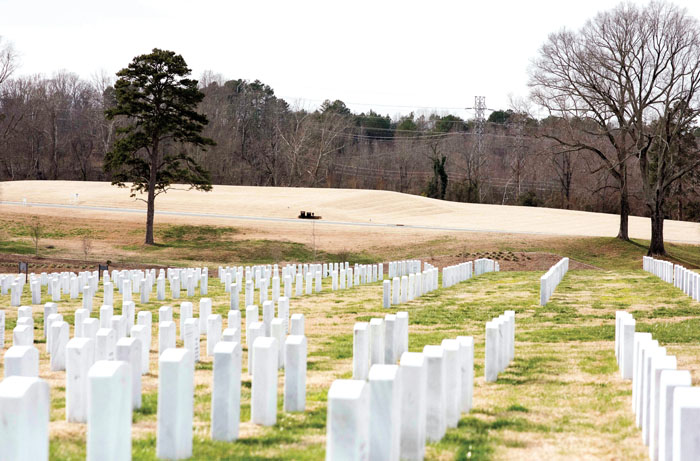 SALISBURY — For years, the Salisbury National Cemetery has been the only one of its kind in North Carolina accepting new interments, and that fact will be true for decades to come following a land transaction last month.

Years in the making, the Rowan-Cabarrus YMCA and the National Cemetery Administration wrapped up a land transaction Jan. 24 that adds more than 30 acres of undeveloped land to the existing 40-acre Salisbury National Cemetery Annex, attached to the VA Medical Center. That’s in addition to the historic national cemetery created after the Civil War and located at 202 Government Road.

Altogether, there are 63.5 acres of land between the annex and historic national cemetery, with 74% already developed and an estimated 26,000 veterans and eligible family members buried in both, according to a news release.

The newly donated land is bounded by railroad tracks and a portion of Old Wilkesboro Road on its southern border, South McCoy Road on the west, a residential neighborhood and condominium complex on the north and the Salisbury National Cemetery Annex on the west. A portion of the land cannot be used for burials because it lies in a flood plain. There will also be a 50-foot buffer of undisturbed land around the cemetery.

“Expanding Salisbury National Cemetery will ensure our veterans and eligible family members living in North Carolina will continue to have the access to the benefits they have earned and deserve,” said VA’s Under Secretary for Memorial Affairs Randy Reeves. “I am very grateful to the Rowan County YMCA for making this generous donation to our Nation’s Veterans and their families.”

The Overton family originally donated the property to the Rowan County YMCA in 2000, with the idea that it could be developed into a recreational site. The land has been farmland in the past, but more recently has been vacant and wooded. The hospital also eyed the site as a potential location for new facilities.

After the Hurley family helped build a soccer complex on Majolica Road, the Rowan County YMCA no longer needed the land, said CEO Jamie Morgan, who now leads the combined Rowan-Cabarrus YMCA. And the organization began exploring what to do next.

Morgan gives full credit to Ronnie Smith Smith for developing and pitching the idea, saying the YMCA was simply “looking for the right fit and what made sense.” Smith also facilitated the transaction between the YMCA and federal government.

Smith said it was an honor and “one of the greatest things I could have done in my life” to help provide more space for veterans to be buried.

Acting Salisbury National Cemetery Director Greg Whitney projected the facility, already the largest in North Carolina, will now have enough space to continue burying veterans until 2065 or later. Previously, Whitney said, the cemetery would have exhausted its available space in 2033.

More than the longevity of the cemetery, which provides burials to veterans at no charge, “it’s about knowing that there are gravesites for veterans and their family in the local area,” Whitney said. Veterans who want to be buried in a national cemetery won’t have to look to other states when making end-of-life plans, Smith said.

Salisbury Mayor Karen Alexander said “it’s a wonderful attribute for the city” to be the location of the only national cemetery in the state that will be able to hold burials. There are also national cemeteries in Wilmington, Raleigh and New Bern.

“It’s an asset that goes beyond the veterans,” she said.

As part of the land transfer, Alexander said, the National Cemetery Administration agreed to allow the city of Salisbury to use a portion of the 50-foot buffer to extend the Salisbury Greenway from an existing section near Catawba College to Kelsey Scott Park on Old Wilkesboro Road.

Alexander said the transfer has been discussed through the tenures of multiple Salisbury National Cemetery directors and multiple mayors as well. She said city of Salisbury staff have been intimately involved and that City Attorney Graham Corriher is working on a final agreement for the greenway.

The Salisbury National Cemetery performs about 1,000 burials every year, with the number steadily increasing, in part, because of Vietnam-era and Korean War-era veterans who are dying, Whitney said.

“I’d stress to those individuals who are veterans or family members of veterans that our service is free of charge and that we definitely have space for veterans and their families,” he said. “Once they come through the entrance, everything is free. … The burials come with full military rights.”

Criteria include that veterans after 1980 must have 24 months of continuous service. Only an honorable discharge is required from veterans before 1980.