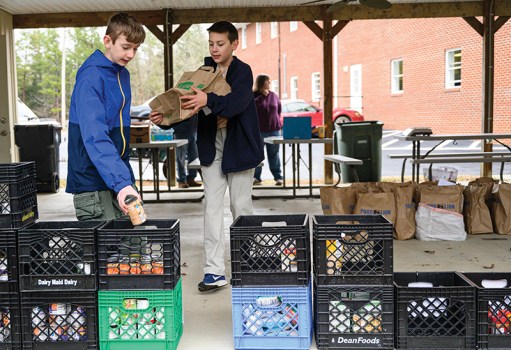 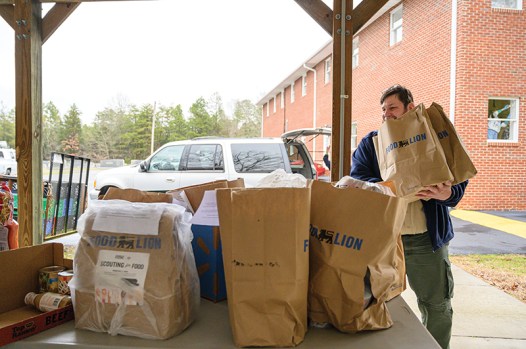 Josh Bergeron / Salisbury Post - Trent Pence carries bags of donated food Saturday from his car to a table at South River United Methodist Church. The church was a processing site for the annual Scouting for Food event. 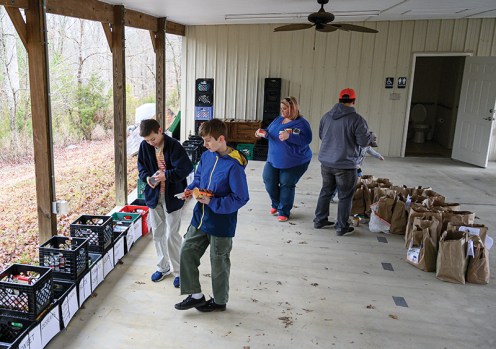 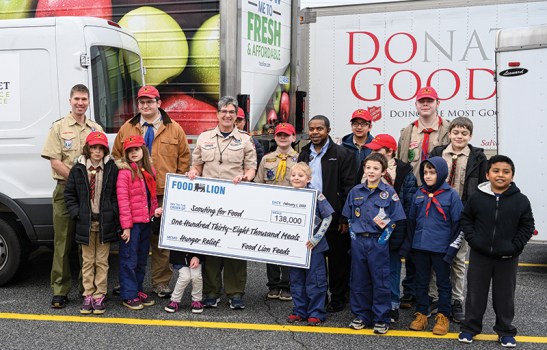 Josh Bergeron / Salisbury Post - Scouts, scout leaders and Food Lion staff pose for a photo Saturday morning during the presentation of a check for 138,000 meals to the Scouting For Food project. Hundreds of scouts spread out across Rowan County on Saturday to collect food for local food pantries.

WOODLEAF — Once a year, hundreds of scouts spread out across Rowan County to collect tens of thousands of pounds in donations for local food pantries.

While this year was no exception, scouts, organizers and donation recipients alike say the annual food drive benefits more than those in need.

“It actually helps the scouts to understand that everybody isn’t just like us, some people need food because they are in need,” said Devin Copley, a tenderfoot in Troop 308.

Copley was joined by a handful of other volunteers at South River United Methodist Church in the northernmost corner of Rowan County and a number of nearby scouts and adults who were collecting donations nearby. They were among 250 or more total scouts and volunteers spread across the county and many times more across the country, said organizer Ann Barber.

“It’s educating scouts that’s a big part of what this is doing,” Barber said. “These scouts might even come into the day grumpy, but you’ll see them running up to the houses once it gets started. You see the impact. It’s an avenue for these scouts to do a service and learn how to do a service. You don’t just know how to go out into the community and help someone.”

But the impact on the community will be significant, too, as the drive had produced 541 service hours for scouts and collected 30,500 pounds of food by Saturday afternoon. Barber said two churches that typically produce large donations were still collecting bags of food. Donations being processing at South River United Methodist Church had also yet to be turned in, with scout leader Trent Pence saying he expected to continue into the night.

One year earlier, Scouting for Food in Rowan County collected 49,000 pounds of food. Barber said she expected this year’s collections to be close to that.

Scouting for Food in Rowan County is bolstered by an annual donation from Food Lion through its Food Lion Feeds program, which aims to donate a total of 1.5 billion meals by 2025, with the program already having reached 600 million. The company on Saturday donated 138,000 meals, or roughly 21,000 pounds.

“We just believe that, as a grocer as long as there’s people hungry, that should be part of our main mission,” said Craig Hopkins, Food Lion community relations specialist.

Meals collected by Scouting for Food are delivered to pantries across the county, including one at South River United Methodist Church that serves an average of 100 people per month.

There, Mike Aistrop draws on his own experience when serving those in need — something Aistrop says he’s proud to do.

“They don’t jump through hoops here. If they’re hungry, God provides the food,” he said. “I was a hungry child when I grew up. I would eat every three days sometimes, and I thought that was normal. It is not normal for a child to go three days without food.”

A larger portion of the total goes to Rowan Helping Ministries in Salisbury, where Executive Director Kyna Grubb said the drive keeps food on shelves for weeks. The nonprofit’s food pantries serves about 1,000 people per month.

“And they aren’t just dropping off food. They are sorting it and helping weigh it. So, they’ve taken any burden off of us,” Grubb said.