North Hills hosting mobile exhibit on Kindertransport along with a survivor 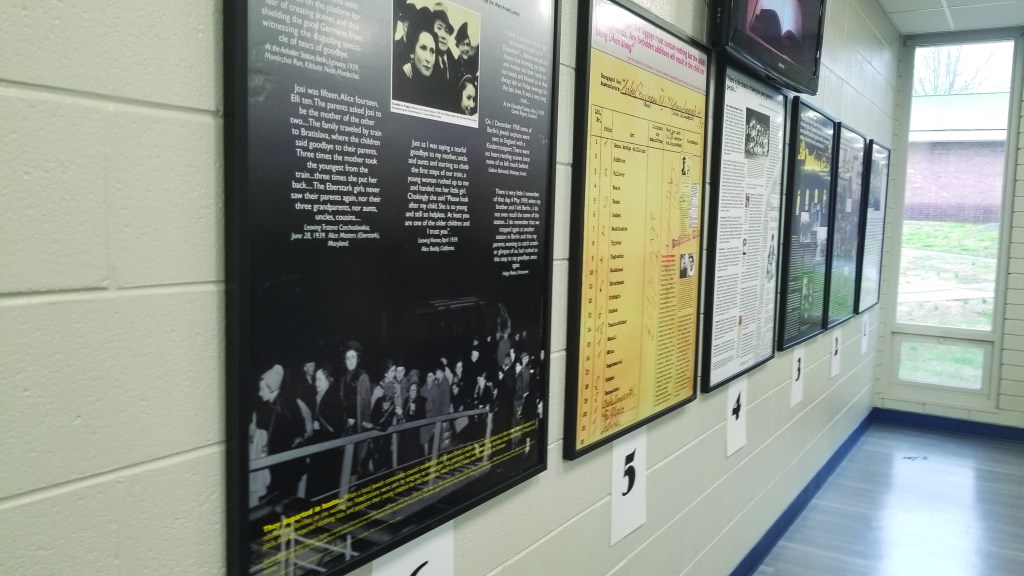 Carl Blankenship/Salisbury Post - Some of the displays that are part of the mobile exhibit on the Kindertransport.

SALISBURY — An exhibit about an obscure rescue effort that took place in the days leading up to World War II is making a stop at North Hills Christian School.

Margot Lobree, a Holocaust survivor who was rescued as part of Kindertransport, will visit the school and speak to students. Kindertransport, German for children’s transport, took about 10,000 children from Nazi territory to the United Kingdom before the war started. Many of the children were the only members of their families to survive the Holocaust.

The exhibit is one of nine that the N.C. Council on the Holocaust offers throughout the state, and Kindertransport is not normally taught in high school history classes. The rescue effort, which ended as the war began, did not achieve widespread recognition until decades after the fighting ended.

History teacher Sonja Davis and the council were key in getting the speaker and exhibit, which is filled with primary sources and photographs. It is on display in a common area in the school where the older students can view it.

Davis said this exhibit was actually stored at China Grove Middle School, which surprised her. The council has other resources that she said will probably be used in the future.

Davis said bringing a speaker to the school helps students get historical context. They can interact with Lobree, ask her questions and understand history beyond dates and text in a book.

The N.C. Council on the Holocaust is an agency of the N.C. Department of Public Instruction, and chair Mike Abramson said interest in the council’s programs have grown over the years. The council also has children of survivors in its speaker program as fewer survivors remain.

Abramson said a teacher who wants to arrange a program can do so by email from the contacts on the NCDPI webpage.

Abramson said speed is key so the council can line up programs to coincide with what is being taught in classrooms. Holocaust education remains as important today as ever because contemporary anti-semitism that surfaces in the U.S. and around the world.

A bill passed the N.C. House with a 112-0 vote on April 16 to require Holocaust education in middle and high schools, but it is stuck in a state Senate committee.

NHCS Upper School Principal Matt Weaver said he encouraged Davis to organize the programs, adding the school wants students to have a first-person perspective in their understanding of history.

“This is kind of a new thing for us, a new initiative, trying to get more of the world into us and more of our students out into the world,” Weaver said.