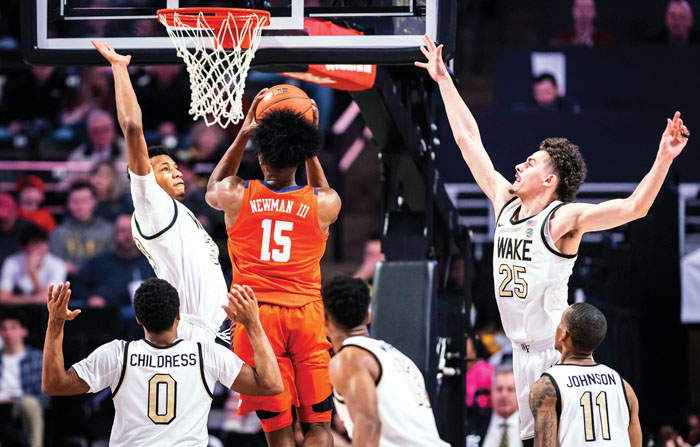 By J.D. BRASIER Associated Press
WINSTON-SALEM (AP) — Andrien White didn’t make any shots in the first half of Wake Forest’s 56-44 victory over Clemson on Saturday night.
But he wasn’t alone. The two teams combined to make only 2 of 20 3-point attempts in an opening half that ended with the Demon Deacons (10-11, 3-8 ACC) holding a 22-19 lead. Clemson’s 44 points was the lowest total by a Wake opponent in Joel Coliseum’s 30 years.
White warmed up after intermission with two quick 3-point baskets to lead the Deacons on a decisive 14-0 run to start the second half.
The senior guard finished with 17 points, hitting 4 of 8 3-point attempts in the final 20 minutes after a scoreless first half. Though his final shooting stats — 5 of 15 from the field (4 of 12 on 3-point attempts) — were mediocre, it was good enough against the cold-shooting Tigers (11-10, 5-6 ACC).
Wake shot 33% from the field in first half, making just 1 of 9 from 3-point distance. But White said coach Danny Manning instructed him to keep shooting.
“He kept telling me to shoot them,” White said. “That really gave me confidence. We were getting the same shots we got in the first half — we just started making them.”
“Coming out for the second half, it was a great start for us,” Manning said.
Torry Johnson also knocked down a 3-pointer during Wake’s 14-0 run.
Clemson never got going against Wake’s zone defense. The Tigers shot only 30.5% from the field, including just 4 of 21 from 3-point range.
Aamir Simms led the Tigers with 14 points and eight rebounds.
Wake standout guard Brandon Childress scored 10 points. Olivier Sarr grabbed a game-high 13 rebounds.
Wake shot only 34.5% from the field, including 7 of 25 from 3-point range.
“We played well enough defensively to win the game,” Clemson coach Brad Brownell said. “Eventually, (Wake) made a couple plays.”
The Tigers followed the Deacons’ run with a 9-0 run of their own to cut the deficit to eight. But Wake’s Ismael Massoud hit a 3-pointer to restore the double-digit lead, and the Deacons pulled away for good.
Chaundee Brown, who had missed seven straight games for the Deacons, scored six points in 12 minutes off the bench. Brown banked in a pair of floaters in the first half.
BIG PICTURE
Clemson: The Tigers’ postseason hopes took a major hit with the loss to the last-place Deacons. The next three games — at Virginia, hosting Notre Dame and at Pitt — are critical, with home opportunities against Louisville and Florida State looming down the stretch.
Wake Forest: By snapping a three-game skid for the third time this season, the Deacons should gain some needed momentum in their quest to avoid a third straight losing season. Brown’s return after missing seven games with a leg injury provided a badly needed boost.
BACK IN THE ROTATION
Brown, Wake’s second-leading scorer, came off the bench in the first half to hit a pair of floaters and a jumper — the final basket in the first half — to provide a spark for the Deacons. “I think he won us the game tonight with his energy,” said White.
KEY MOMENT
Massoud’s 3-pointer with 11:28 to play halted a 9-0 Clemson run that had pulled the Tigers to within 36-28 and caused some tension with the home fans. From there, the Deacons pulled away.
UP NEXT
Clemson: The Tigers play at Virginia on Wednesday.
Wake Forest: The Deacons play at Louisville on Wednesday.