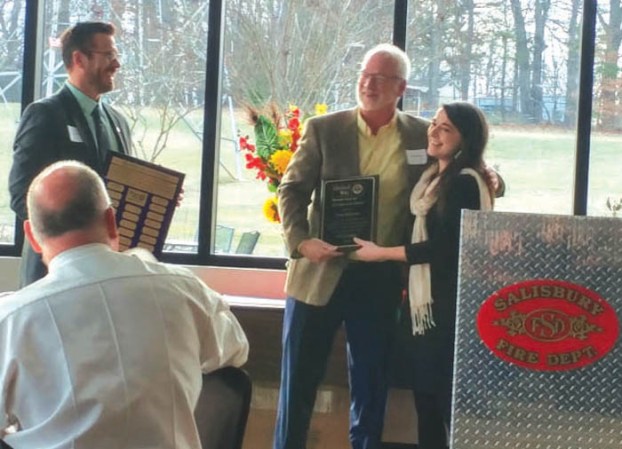 Submitted This year’s winner of the Helping Hand Award was Greg Anderson, publisher of the Salisbury Post.

After exceeding its 2019 campaign goal with $1,525,098, Rowan County United Way took the opportunity to thank the countless volunteers, companies and others who helped make it possible on Thursday, January 23rd at the Aymer Center at Hood Theological Seminary.

Each year, United Way recognizes an individual for their outstanding service by presenting the Helping Hand Award. This year, Greg Anderson stood to accept the award. Anderson, Publisher of the Salisbury Post, has served in many roles with the agency including multiple years on the Campaign Cabinet, the Public Relations Committee and as a board member. “He is always positive, committed, loyal, compassionate and never seeks recognition. He truly cares about United Way, the work we do, the volunteers and the community”, said Executive Director, Jenny Lee.

Campaign Chairman, Chief Bob Parnell, presented distinguished campaign awards. The Jackie Award, which goes to the individual who has demonstrated the most enthusiasm about the United Way campaign, was given to Janet Johnson. By bravely sharing her story of her son, Philip, she helped in the success of the campaign.
The campaign award for Most Employee Spirit went to Innospec and was accepted by John Struzick. The company sponsored and participated in United Way’s first Into the Light Walk, a suicide and mental health awareness event, and held meetings with employees to spread United Way’s message.

The award for Best New Campaign was presented to New York Air Brake. This company was established in Rowan County one year before running their first campaign. They raised a total of $5,746 with a per capita of $53.
The Most Improved Campaign With Fewer Than 100 employees was given to Vulcan Materials, a company that increased its campaign by 14%, taking their per capita of giving from $143 to $162.
The winner of Most Improved Campaign With More Than 100 Employees was City of Salisbury, which had an increase of 15%, bringing their per capita of giving from $76 to $86.
F&M Bank received the Chairman’s Achievement Award for its involvement by the CEO, who helped the company achieve their goal. They also assisted with Into the Light and used special visitors to kick off their campaign, which had a 65% improvement. In the final hour, it was F&M whom helped United Way meet its goal by giving a $36,800 gift.

Outgoing Board President, Marcus Koontz, honored Chief Bob Parnell with the Campaign Chairman’s Shadowbox Award for his exceptional leadership during the campaign. Outgoing board members, Gary Blabon, Bill Burgin and Michelle Patterson, were also recognized for their dedication and service with special plaques.

“So many volunteers, so many local businesses, so many donations, so many hours poured into serving and caring for the needs of others. This type of philanthropy has become a rare sight in today’s world. But here in Rowan County it is alive and well. This is something we should all be proud of and thankful for”, said Koontz.
Following the awards, the board welcomed Seth Waller as the new President and appointed new officers:
• President, Seth Waller, Falcon Investments