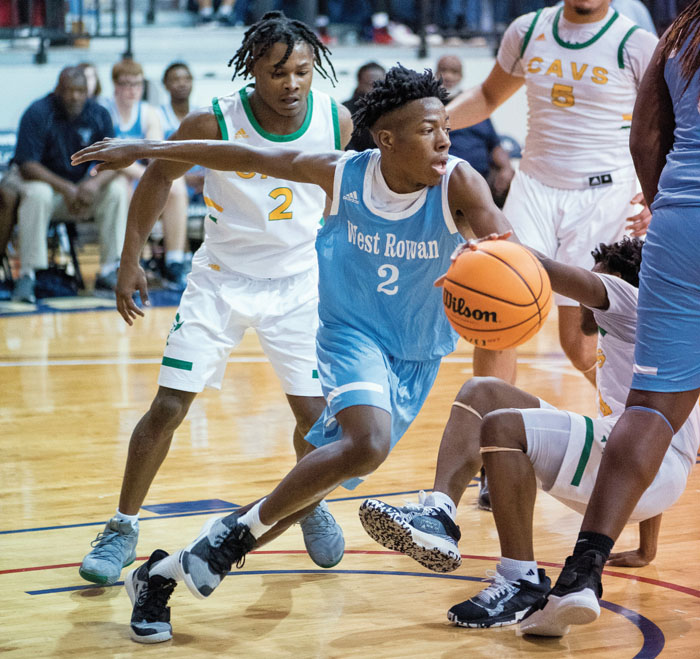 GRANITE QUARRY —The tradition is storied and head coach Mike Gurley is in the Salisbury-Rowan Hall of Fame, but West Rowan hasn’t a won a regular season conference championship in boys basketball since 2010 when Keshun Sherrill, B.J. Sherrill, K.P. Parks, Chris Smith, Domonique Noble, KaJuan Phillips and Isaiah Cuthbertson were the core players.

That’s a serious drought for Gurley and the program. But the Falcons are determined to end it and took another small step forward with Friday’s 64-50 win at East Rowan.

West (11-7, 5-1) is good, not great, and was out-run by athletic Statesville at home on Tuesday, so there’s a long way to go before there are any celebrations.

It won’t be easy. The Falcons are tackling the North Piedmont Conference championship quest short-handed.

“Not everyone wants to practice hard, so we’ve got nine guys left,” hard-nosed power forward Chaz McCombs said with a shrug. “But we’re winning.”

McCombs, best known as a ferocious defensive end for the football team, led the way Friday with 19 points. He battled hard on the offensive glass and he made free throws.

“He’s a leader, really he’s the straw that stirs the drink for us,” Gurley said. “When he’s playing well, our other guys follow.”

East doesn’t have anyone with the size or physique to match up with the 6-foot-5, 220-pound McCombs, so he frequently had his way.

“No. 5 (McCombs) killed us,” East coach Trey Ledbetter admitted.  “We had no way to handle him.”

East focused its defensive effort on containing Jalen Moss, the guard who is West’s leading scorer. The Mustangs held Moss to 13. That might have given them a chance of springing an upset except for McCombs’ 19 and Sam Wood’s career-high 13.

“Sam really picked us up,” Gurley said. “He made shots, gave us energy.”

Wood probably didn’t even make East’s scouting report, but he connected on four jump shots, three of them 3-pointers, in the first half. He’s a shooter who hasn’t been shooting straight, but he filled it up in the second quarter as the Falcons moved to a 33-25 halftime lead.

“I’ve been struggling,” Wood said. “Tonight I just it let it fly instead of thinking about it. You make one, and it really helps your confidence.”

Vincent Jones, a tough guard with strength and quickness, kept East in the game in the second quarter. That’s when he scored 11 of his 19 points.

“We were running our screen-and-roll stuff pretty well,” Ledbetter said. “Vincent was getting the ball in good scoring position a lot. He did well, but he might have scored 30 if some more layups had fallen for him.”

Macari Allison scored six points for the Falcons in the third quarter as they maintained a safe lead. East took a 13-point lead to the final quarter.

“I liked our defensive effort,” Gurley said. “We’re kind of a 1990s team, but East is one of those modern teams with a lot of catch-and shoot guys who are good at making 3s. We were able to push their offense back several feet from the 3-point line and made those shots tougher.”

West was able to finish things off with McCombs and Jay Joseph combining for 10 made free throws in the fourth quarter.

“It was a pretty good game for us,” McCombs said. “We executed the game plan. We denied the ball and didn’t give up open 3s. And on offense, we got it inside.”

For Ledbetter, it was a familiar story. The Mustangs get after it and don’t get blown out, but East misses Jake Hunter (the team’s leading scorer went down with a stress fracture after 14 games) and isn’t making enough outside shots to compensate for its size deficiencies.

“Maybe our confidence is down a little because our record isn’t good, but there wasn’t any problem with our effort level tonight,” Ledbetter said. “This was just a case of the better team winning.”

NOTES: With Jonny Hassard on the road on a recruiting trip (at UMass), Gurley added jayvee standout Noah Loeblein to the varsity roster.  He played a little. “He sacrificed himself tonight,” Gurley said. “I told him he might not play at all, but we needed him, and he was like, ‘Yes, sir, I’ll do it.'” … West won a hotly contested jayvee game at the end on a bucket by Josh Noble with less than four seconds left. … West is on the road at South Iredell and North Iredell in the week ahead. … Next for East is a trip on Tuesday to rival Carson — “Cougar Town” — as Ledbetter calls it.